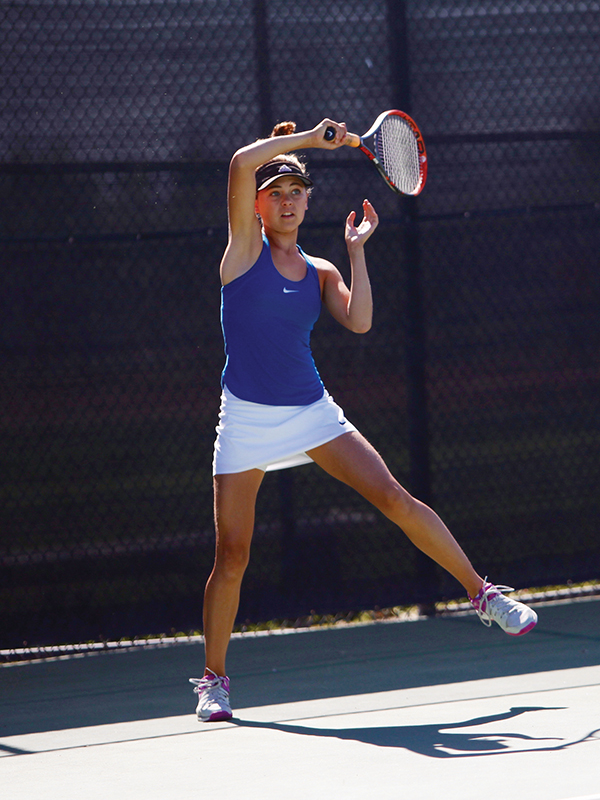 It was a one-two-three sweep for Palisades High School in the City Section girls doubles tournament on December 15 at the Balboa Tennis Center in Encino.

Pali’s Alex Miller and Caroline Ross won the championship by beating the Dolphins’ freshman team of Halsey Hulse and Noe Winter 7-5, 6-3 in the finals.

In order to reach the championship round, the second-seeded Miller and Ross barely worked up a sweat in their first four matches, losing only five games out of 30. Their biggest challenge came in the semifinals, when they went three sets against teammates Maddy Goore and Kalea Martin, who were seeded third.

By contrast, the top-seeded Hulse/Winter duo never played more than two sets. The closest anyone came to challenging them was the Cleveland team of Irene Kim and Katie Song (6-1, 6-3).

Dolphins head coach Bud Kling was asked how he coaches when both of his teams are fighting for the championship.

“I don’t root for anybody. I just want them all to play well and have fun,” he said, and then noted that, “I was coaching the third team which was playing Cleveland.”

When there were breaks, Kling said, he gave individual playing tips to his players in the championship, “such as ‘keep your elbow down,’ but I didn’t give them any strategy. They’ve played against each other all year, they knew what to do.”

Kling said that Hulse/Winter had beaten Miller/Ross six out of seven times the week before the championship finals. “Caroline [Ross], who had won doubles last year with Gigi [Feingold], maybe had more experience under pressure,” he speculated, which might have made a difference.

All six Pali girls automatically made the CIF First team.

The season stretched almost an additional two weeks. The initial doubles tournament started November 16 and was to conclude on December 5, but was pushed back because of the fires (and unhealthy air). Then when it was deemed safe to play, it was finals week at city schools, so the championship was postponed.

Pali’s team depth is so great, Kling said, that he would have had four teams in the top four. But a few years back at the doubles tournament, of the eight teams in the quarterfinals five were from Pali and in the semifinals, all were Palisades teams, so the CIF instituted a ruling that a school can enter only three doubles teams and four individual players.

On the individual side, Ireland Amato (seeded fifth) and sister Sophia (seeded sixth), made it to the quarterfinals before losing to two Venice players, the fourth-seeded Christine Inah Canete and the third-seeded Fmar Canete.

The Dolphins then advanced to the CIF/USTA Southern California Regionals at Claremont Club, where they fell 7-0 to San Diego sectional winner Torrey Pines. Torry Pines, the defending champion, lost to Arcadia 6-1 in the semifinals and Arcadia lost to Corona Del Mar 4-3 in the final.

Going into the tournament season, the Dolphins were 22-2, losing only to West Ranch and Palos Verdes. They finished 12-0 in league play.

“This has been one of the nicest groups of girls that I have coached. They all worked really hard,” said Kling, who added that “This is also one of the best parent groups.” He cited the parents’ willingness to help out whenever it was needed.

The veteran coach has only three seniors graduating this year, Alex Hart, Goore and Taylor Barfield. “We’re set for next year,” he said. “We should be really deep. Our freshman class this year was exceptionally talented.”