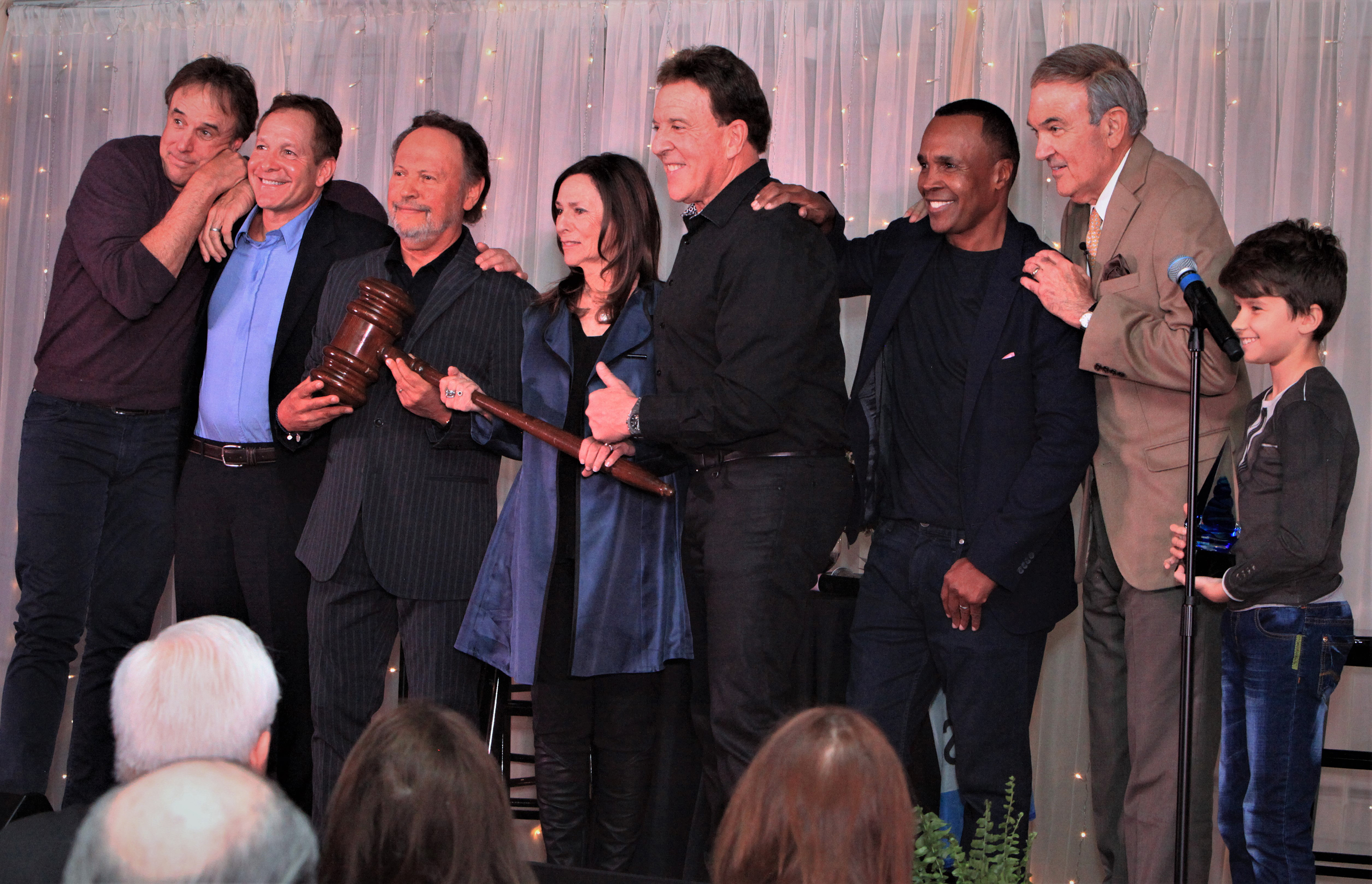 The toughest ticket in town this past year was last Saturday’s sold-out event, “Night of Comedy with Kevin Nealon and Friends,” held at the Palisades Woman’s Club.

Bjornson’s wife, Vicki Batkin volunteered her time as Comedy Night Producer. Batkin is one of the founders of M7 Entertainment Group, where she builds brands and franchises for a variety of talent and companies.  She was responsible for transforming the Woman’s Club it into a comedy club.

Before the comedians took the stage, Marcy Levy (a.k.a. Marcella Detroit) wowed the audience with great music. A vocalist for Eric Clapton’s band, Levy co-wrote “Lay Down Sally,” “Innocent Times” and “The Core,” before recording a solo album “Jewel.”

After welcoming remarks by Chamber President Susan Payne and emcee Sam Lagana, it was laugh after laugh as each past “mayor” took his turn.

Jake Steinfeld, mayor number 28, explained that the problem with the title is that many people don’t realize it is actually an honorary position and expect results. “I was getting calls at my house,” Steinfeld said, explaining that one caller told him “There’s all this noise on Sunset and I know you can fix it.”

Another time, while shopping in Gelson’s, Steinfeld was asked by one of the employees, “There are weeds by the bus stop at the Village Green, can you take care of them?” Steinfeld said “Yes.” Not wanting to disappoint, he sent his gardener. The next time he was in Gelson’s, he got thumbs up from that employee.

The town’s 27th mayor, boxing champion Sugar Ray Leonard, said people had a mistaken notion of his role. He was in Pharmaca one day when a resident asked, “Can you fix the parking meters?”

Leonard joked, “When I walked around town as the mayor, I was the man. It was only when I got home that my wife put things in perspective.”

Actor Steve Guttenberg, No. 25, who served two terms (two years each), explained how he came to be mayor.

“Arnie kept asking me–and then he started asking my mom, telling her that I should be the mayor,” Guttenberg said.

One day he was having lunch with his mom at Mort’s Deli [on Swarthmore], and sitting at a table across from them was Anthony Hopkins [2000 mayor] and Martin Short [1998 mayor]. Hopkins had just played the imprisoned forensic psychiatrist Dr. Hannibal Lector in the 2001 movie “Hannibal.”

“My mom went up to Tony and said, “Excuse me, Hannibal, should my son be mayor?”

Hopkins replied, “It would be a wonderful thing.”

Even Councilman Mike Bonin, who was on hand to present a certificate of appreciation to Wishnick for his 25 years at the Chamber, joked, “Now that I know what honorary mayors do, my office will be forwarding calls.”

Emcee Lagana, who is a vice chancellor TK at Pepperdine, the stadium voice of the Rams, and a life-long resident, presented Wishnick with the inaugural Crest of the Chamber award.

On stage, Arnie mused about the past mayors, each of whom he recruited to represent the Chamber and the town. “Mayor Jake even designed a Pacific Palisades flag,” he said, noting it will come in handy “if we ever go to war against Topanga.”

The outgoing mayor, comedian Kevin Nealon, “wanted to a build a wall around Pacific Palisades,” Wishnick quipped, and he remembered how Guttenberg promised that “there will never be a scandal during my administration, but if there is, you will take the blame, Arnie.”

In addition to promoting business in the Palisades, Wishnick said, “We get a lot of calls at our office. Every year, the number one query is, “What day is the Fourth of July parade?”

The number two call he receives is “My neighbor is the neighbor from hell. His tree branches are above my property. Do you think I can cut the branches?” Wishnick suggests that perhaps the caller should talk to the neighbor, but if that doesn’t work, he advises, “Cut it down. What could happen?”

He concluded, “Evidently the Palisades does not have a good neighbor policy.”

Nealon joked that after his tough life as honorary mayor, which meant riding in two Fourth of July parades and on the fire truck for Ho!Ho!Ho!, he would finally have his life back.

He noted that during his term as mayor “there has not been one false nuclear missile warning” and that the “Chamber of Commerce has never shut down.”

He said there have been so many changes in the business district, he had not realized that the post office had moved from Sunset over to La Cruz. “I’ve been dropping my letters off at Chipotle.”

Nealon also admitted, “I’m not worried about North Korea, because we have Palisades Patrol.”

He then introduced comic Candice Thompson, who was on NBC’s “Last Comic Standing,” “The Tonight Show” with Jimmy Fallon and on the YouTube sketch series she co-created, “Creepy Caress.” She joked that if one’s parents are African American and Native American, the genetics result in someone like her, who looks white.

She was followed by Tom Dreeson, a popular late-night talk show regular who traveled and opened for Frank Sinatra for 14 years. Variety described him as “one of the most respected family comedians of our time.”

“It’s a good thing I got divorced or I would have been dead five years ago.”

That brought to mind the Kardashians. “Kim said she would like to take a selfie with Jesus,” Dreeson said. “Hasn’t Jesus suffered enough?”

Culminating the evening, Billy and Janice Crystal were inducted as the new co-honorary mayors. Looking at Billy, Nealon quipped, “Did you ever think hosting the Oscars would lead to this?”

In keeping with the current political climate, Nealon had the Crystals place their hands on a book titled “Little Big Lies,” instead of a Bible, and promise to 1) bring more Norwegians to the Palisades; 2) when riding on the firetruck with Santa, not to yell “We’re Jews, Santa isn’t real”; 3) to continue the construction on a secret tunnel between The Grove and Caruso’s Palisades Village; 4) not to refer to the Palisades as Pee Pee town; 5) continue Nealon’s work of getting the Alphabet Streets in correct order; 6) find a permanent location for the Farmers Market so “we’re not guessing”; 7) promise not to be late for any appearances because you’re trying on clothes at Elyse Walker. . .and “I’m referring to Billy here, not Janet”; and 8) continue the campaign to have receptacles in every public bathroom for discarded Botox needles.

After the Crystals were duly sworn in, they gave their inaugural speech, which included plans for a successful transition of power and implementation of new town laws.

“I think there should be a curtain in the window of the nail salons so we don’t have to see customers getting massaged and soaking their feet in sudsy water,” Billy said. “What is this, Plato’s Retreat? Too decadent; I get my nails done at Paws and Claws.”

“We also have a plan to increase revenue,” Janice said. “We’re going to charge people at the Yogurt shops for tasting.”

Billy added, “No more freebies, no more going in there, sampling 15 tasting cups of yogurt and then saying, ‘I’m full,’ leaving and not buying anything.”

Janice chided Rick Caruso, who was in the audience. “You said there will be no cannabis store in the new village. Rick, are you high? Do you know how much more business McConnell’s Ice Cream will do?”

Billy concluded, “When I was asked to be the honorary mayor, I talked about it with Janice and felt we should do it together. It’s never been done before but it’s really what the Palisades is all about.

“We moved here in 1979 because it was a great family community. We raised our children here, our grandchildren love it here, and a new exciting time for the Palisades is upon us. We’re excited about being a part of it.

“We’ll see you at the Fourth of July parade!”