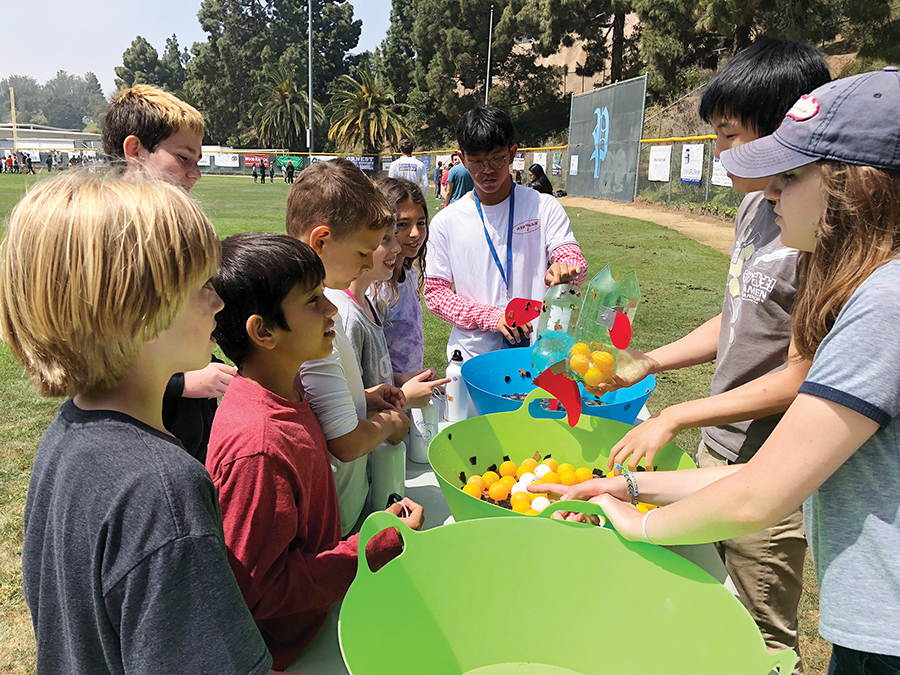 It was a game of Jeopardy. “We’ll take Energy Saving for $300,” said the two Palisades Elementary School fifth-grade girls.

“What uses less energy? A microwave or an oven?” the Palisades High senior asked. After some discussion the girls said, “Oven.” Incorrect: a microwave uses 50 percent less energy.

Next, the fifth-grade boys chose “Recycling for $400.”

“What bin does a coffee cup, like one from Starbucks, go into?”

“Recycling, the blue bin,” the three boys responded instantly. Wrong. Coffee cups have a plastic lining, which means they go in the black bin.

Into which bin do you place an unused paper napkin? If you guessed recycling, you would be wrong. PaliHi students explained that a napkin has fibers too small to be recycled.

Which saves more water, a dishwasher or doing dishes by hand? “The dishwasher,” said senior Liam Mathers. “That’s what I tell my mom every time she wants me to do dishes.”

For the past 14 years, students from Steve Engelmann’s AP Environmental Science class and from Karyn Newbill’s honors marine biology class (the past six years), find ways to teach Palisades Elementary School students about reducing, reusing and recycling, protecting endangered species and other ways of saving the planet.

The event, in conjunction with Earth Day, was held on the PaliHi baseball field, with 34 different booths—all planned by high school students.

“It’s so cool this year,” Newbill said. “They came up with a lot of original ideas.”

Engelmann said that he and Newbill oversaw the ideas to keep from having 30 booths on recycling.

“We told them ‘no bummers,’ we wanted uplifting—telling the kids what they could do,” Newbill said.

“One girl wanted to put down a plastic grate and have the children take off their shoes and stand on it like some animals do,” said Englemann, who noted this booth was a no-go. Instead, the kids were asked to come up with positive ways of teaching. Broken into smaller groups, the young students were led by a high school student to different booths and tables.

Senior Edwin Guzman had his six charges practice being penguins. He explained how each penguin has its own sound and calls out to find its mate or its parents. The kids were each give a card with a sound, then they had to find their “family” by calling the right sound back.

At the pearl table, students were asked where the gem comes from. The most common response was “mermaids.”

The kids were excited to learn that “spit” was involved. Senior Ava Jorgensin explained, “A piece of sand or some irritant will get in the oyster and will cover it with a special coating, kind of like spit.”

At the Jaws table, kids learned about shark myths. For example, how many people do sharks attack? Very few. How many sharks are killed by man? More than 100 million every year.

Elementary students got to see the difference in soils by pouring water into dirt, clay, sand and gravel, and watching the water run out. Yet another table was about what to compost: newspapers, fruits and veggies, coffee grounds and egg shells.

At the baby turtle table, kids were told how many obstacles sea turtles face after hatching and trying to return to the ocean. To make the point, kids pretended to be baby turtles, carrying an egg on a spoon and dodging cones—the obstacles making it much harder than it initially seemed.

At the “deadliest catch” table, kids were given a fishing pole, and when they threw their line into the ocean (a blue tablecloth), a student under the table attached one of nine tags telling them what endangered sea creature they had caught, which ranged from a hammerhead shark to white abalone and a dugong. A high school student would then suggest ways to help save ocean inhabitants.

One particularly interactive table about saving the coral reefs had small balls flying everywhere. Plastic cups, representing the coral, were lined up on the table. Kids threw balls, trying to knock the coral off the table. Older students then explained how youth could help save the reefs, and the elementary students were again asked to throw balls at the “reef.” But this time the high school students batted them away.