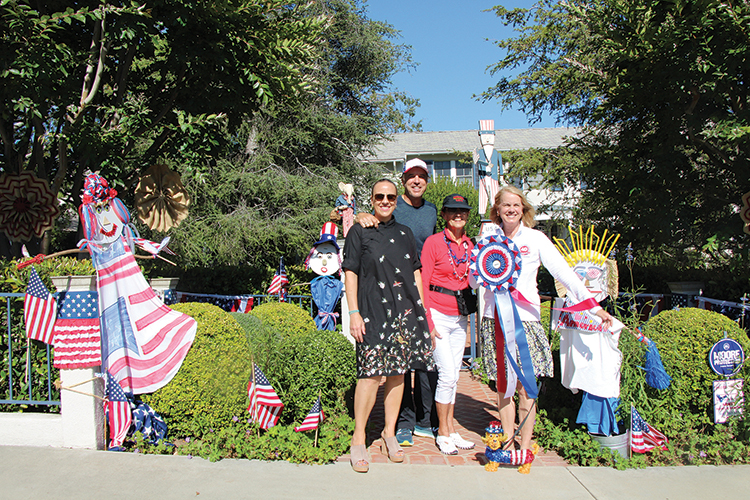 What could your home have in common with the Huntington Palisades residence of Bill and Cindy Simon?

It could be selected as the winner of the Fourth of July Patriotic Home Decorating Contest, sponsored by realtor Joan Sather at Sotheby’s International Realty.

Sather, a Pacific Palisades resident who has sponsored the contest for the past eight years, advises homeowners: “It is time to get out the red, white & blue, for the judge are coming!”

All homes in Pacific Palisades are eligible.

Yes, that means those people who live in the Highlands, Castellammare and the Riviera. Even if you can’t keep up with the Simons— who yarn-bombed three trees with red, white and blue squares, put flags and patriotic bunting on the fence, added a homemade Uncle Sam and Lady Liberty by the front gate, and had Lady Liberty hold a flag proclaiming “I heart America”—you can still make your place look festive.

Cindy, a longtime resident, usually dec- orates for the Fourth, but not to the extent she did last year. “Usually I’ll put up something,” she told the News after winning. “But this year I went all out.”

The winner of the contest automatically becomes a judge the following year, so Simon will join Sather, Palisades Honorary Mayors Janet and Billy Crystal and maybe one or two additional mystery judges.

It is easy to enter the contest: 1.) decorate the front of your home in red, white and blue or American flags or any other patriotic symbol or any combination of bunting, flags or statues; 2.) take a photo (cellphone photos are fine); 3. go to palisades4th.com and click on Home Decorating Contest and upload it or go to the Palisades Americanism Parade Association Facebook page.

Photos must be submitted by July 1. Preliminary judging of the submitted photos will take place July 2.

Then be on the lookout for red-white-and-blue-decorated golf carts cruising your neighborhood on Tuesday, July 3.

“Make your plans now to join the con- test,” Sather said. “We love to knock on the doors of WINNERS!”

The top prize is a flag that flew over the U.S. Capitol as well as an opportunity to judge the 2019 contest.

The top 10 finalists will also receive prizes from local businesses and recognition certificates.