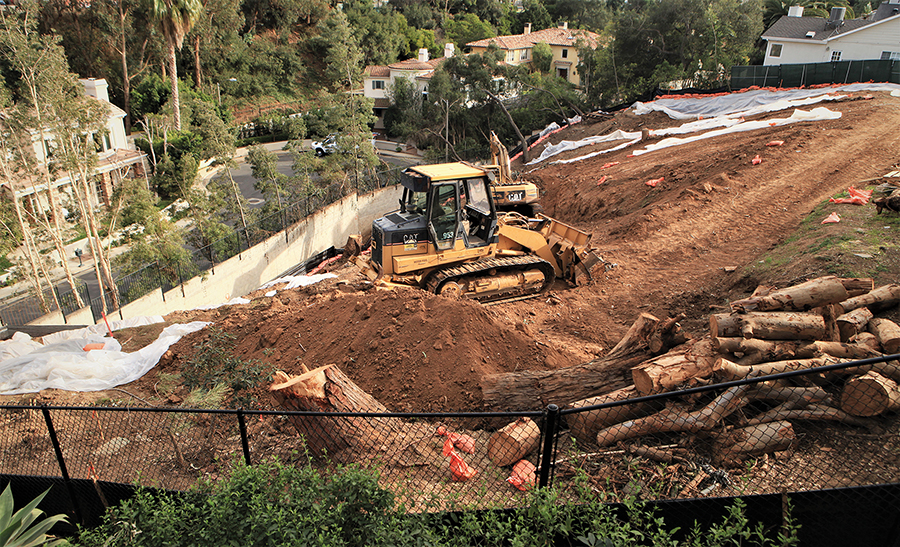 Construction on two houses along Hampden Place, a street on the edge of Potrero Canyon, was initially halted on January 17 for failing to have an erosion-control plan in place. Plastic sheeting and sandbags were placed on the property, but no further activity was noted.

Now, construction is stopped because according to a March 6 letter posted on the fence of 712 and 714 Hampden Place, permits were issued in error and there is an intent to revoke the building permit.

2. LAMC Section 12.21.C.10.(a).(11).(ii) states that lots fronting on a substandard street—elevated stairways, porches, platforms and landing places shall not project into the front yard. This project had an elevated platform/fill area and parking area in the front yard, which is not allowed.

Last summer, neighbors had contacted the City of L.A. asking why there was no haul route hearing because the total dirt to be excavated was more than 1,000 cubic yards. Pourmola’s hired expediter, Steven Somers, told his client that the L.A. Department of Building and Safety determined that a haul route would be required. But a way to circumvent a hearing and haul route approval (which generally take about nine months) would be to sell the property. Subsequently, Pourmola gave one of the lots to Fahad Vakil.

At an October meeting arranged by Councilman Mike Bonin’s District Director Debbie Dyner-Harris, neighbors argued that there should have been a haul-route hearing. It appears the city now agrees.