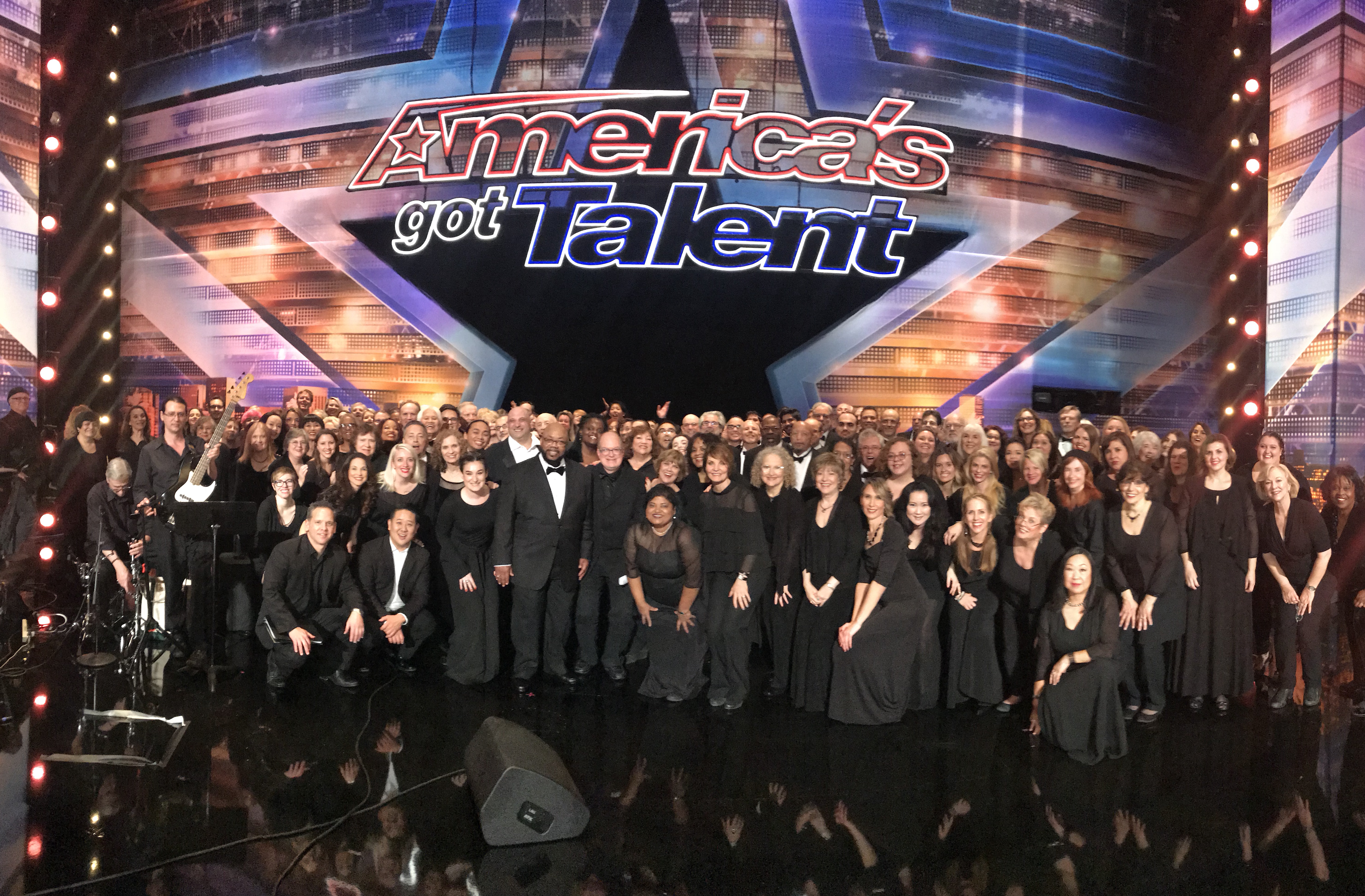 When the Angel City Chorale sings, it’s to bring joy to the audience and to themselves through music.

It’s not often they sing to be judged.

But the chorale faced the judges when they did an on-camera audition to air later for the upcoming 13th season of the NBC hit “America’s Got Talent.”

The chorale and a variety of other acts performed before a packed house at the Pasadena Civic Auditorium March 12. Seated in front of the audience were the show’s four judges: Simon Cowell, Heidi Klum, Mel B and Howie Mandel.

That was a surprise to Harry Eden, a chorale member who lives in Pacific Palisades. “I didn’t know this was a judgment, that they were making a decision on us,” he says. “I thought we were just there to perform a song.”

On any given day, there are about 150 to 160 voices in the Angel City Chorale. And right now, six are Palisadians: Eden, Norman Helgeson, Kathy Jackson, Marian Niles, Cheryl Robinson and Adam Wolman. Five of them were part of that on-camera audition. Only Jackson wasn’t available.

Maybe because he didn’t know about the judging part, Eden wasn’t nervous, although he says he wouldn’t have been nervous in any case. “I’ve been singing for a long time. My expectations were: a new experience.”

Niles also wasn’t nervous. “I was excited because it was a whole new experience and we were going to be in front of a live audience and it was being taped for television. So, it was exciting. But I wasn’t particularly nervous.”

While Eden and Niles didn’t have extra nerves, Sue Fink sure did. The West Los Angeles resident is the founder and artistic director of the ACC.

“I was like a deer in the headlights,” Fink says. But that didn’t last. “Once it got going, I was having a blast. Once I got going, it was just like ‘hey, this is cool!’”

While her nerves were still active before the performance, Fink met with the show’s host, the multi-talented Tyra Banks, who lives in Pacific Palisades.

“I still don’t know what happened back- stage with Tyra Banks,” says Fink. “I know I had a five-minute conversation with her, and she seemed very nice. But I just remember a tall person and me being up to maybe her chest. That’s all I remember about that.”

Memorable for Marian Niles is the hurry-up-and-wait aspect of most things Hollywood, including the March 12 audition. “I think the thing that impressed me the most was how much waiting there is when you are doing this kind of thing. It just goes on and on and on. We had a two-and-a-half-minute little deal that we were singing and we were there for nine hours.” Because they were being judged, the questions were: Would the judges send the Angel City Chorale home, ending their chance at the eventual $1 million prize? Or would Simon Cowell and the others keep the chorale in contention and bring them back for a second round? And there’s the question: which song did the chorale sing?

The Angel City Chorale’s performance audition will air on NBC sometime early in the new season of America’s Got Talent, perhaps even this past Tuesday. As of press time, the air date had not yet been revealed to the chorale.