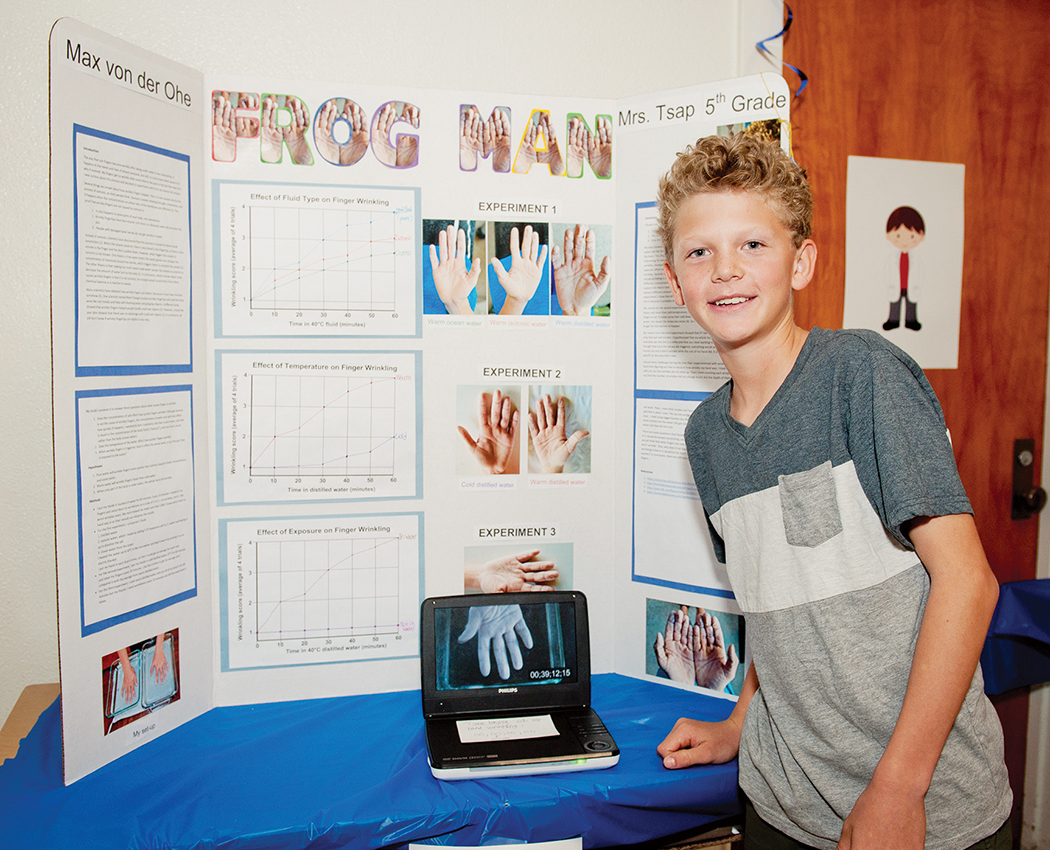 As scientists from UCLA and Cedars-Sinai visited every student project, the students explained their projects, while receiving a blue ribbon for participation. Only fifth graders were judged and had a chance to win prizes.

For Max von der Ohe, who finished in first place, his curiosity was piqued by his family’s trips to Palm Springs: specifically, the amount of time he spent in the pool. “I’d go in for three hours and my hands would be super-wrinkly,” said the fifth grader. “I wanted to know why.”

Max dedicated two months to his project, testing the wrinkling of his hand in three different types of water (ocean water, isotonic water and distilled water), using different temperatures of water and putting part of his hand in and leaving his thumb out to see what would happen. After researching and coming to a conclusion, he made a colorful poster entitled “Frog Man.”

For his effort and dedication, Max took first in the science fair, the annual event that fills the school’s auditorium and cafeteria with colorful tri-fold displays explaining the hypothesis, experiment, results and conclusions of each project. He and the other winners received science kits.

Second-place finishers Dashiell Barrett and Colin Kraber, who both have dogs, were intrigued by an article that said dogs may lick their wounds because their saliva has antibacterial properties. They wanted to test this out with their project entitled “Prescription Pooch.”

They collected bacteria from a phone, computer and TV remote that they then let grow in a petri dish. Colin’s Goldendoodle then licked Q-tips with the bacteria on them. Their conclusion was that dog’s saliva did not have antibacterial properties. For now, the boys are sticking to Neosporin for healing their wounds.

A runaway balloon got Cate Deiter and Caroline Quigley thinking about how far a balloon might travel. Their “Air-Powered Balloons” (which earned third place) flew not high in the sky, but across Cate’s basement.

The girls filled the test balloon with air but left it untied, attaching it to a straw on the fishing line they strung across the room.

Their experiment involved three different nozzles made from the barrel and tips of various pens which they placed on the end of the balloon in turn. They then removed the nozzles and measured how far the balloon made it across the room each time.

“I think it’s special that none of this is graded or required. You can choose what you’re curious about,” said Christina von der Ohe, a professor in the life sciences department at Santa Monica College and co-chair of the science fair along with Kristy Morris and Shana Svendsen.

For Principal Gary Saunders, the science fair is a great example of the whole school using the four Cs: critical thinking, creative problem solving, communication and collaboration. “The classroom is the incubator and they are going beyond the classroom to try to solve problems,” he said.

The criteria for the top projects included “How much did students themselves understand, how creative was their approach, how scientific was their approach and was their conclusion supported by data,” said Morris, who has a Ph.D. in biological chemistry from UCLA. “The most important thing is participation and that the students have a positive experience.”