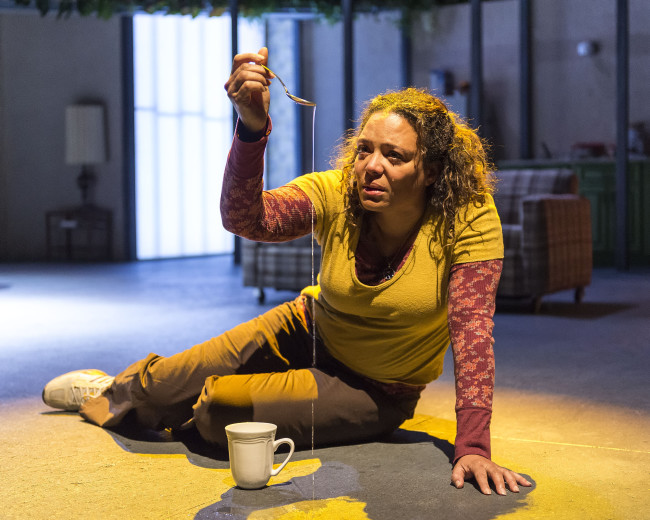 Drug addiction and its associated pain may not seem like great topics for an uplifting, lyrical play filled with humor and compassion.

Yet the Pulitzer Prize-winning “Water by the Spoonful,” playing at the Mark Taper Forum through Mar. 11, adroitly accomplishes this trick with grace and style. The play, which is the second in Quiara Alegría Hudes’ trilogy, continues the tale of Elliot, now a Iraq War veteran dealing with post-traumatic stress disorder, and his Puerto Rican-American family living in Philadelphia.

Cancer has hit Elliot’s mother, who is the glue that holds the family together, and Elliot struggles with the aftermath while also battling his own demons from the war. In the trilogy’s first play, “Elliot, A Soldier’s Fugue,” playing through Feb. 25 at the Kirk Douglas Theatre, the tale is focused on the war experience, moving back in forth in time to tell the military stories of both a younger, more innocent Elliot and prior generations (see separate review).

“Water by the Spoonful,” masterfully directed by Lileana Blain-Cruz, is centered on home and recovery. Like “Elliot,” the plot switches between parallel characters’ stories, but with even greater ease, confidence and beauty. At first, it’s not clear how the scenes centering on Elliot (Sean Carvajal) and his cousin Yazmin (Keren Lugo) connect to a separate tale of Odessa (Luna Lauren Vélez) and a group of online recovering addict pals, but both stories are equally interesting and lively.

Eventually, the two groups collide powerfully, and their stories enhance and illuminate each other. The interactions between Odessa, the administrator of an addiction recovery website, and her virtual friends, Orangutan (Sylvia Kwan), Chutes&Ladders (Bernard K. Addison) and Fountainhead (Josh Braaten), provide a comic and touching core to the piece as they confront their addictions and each other.

The four play off each other in a way that both delights the audience and makes clear their challenges. Getting to know them and watching their vivid interplay and growth is a large part of why the play works so well. “Water by the Spoonful” also offers an examination of the often messy pain of families and life, which is enhanced by a musical backdrop of John Coltrane’s jazz.

The performances of each actor are stellar and fitting. None outshines the other, although Vélez’s Odessa provides a grounded reality that is a central spine of the play. The entire production is a treat, and if you can’t take the time to see the whole trilogy, this play is not the one to miss.

On Feb. 17, “The Happiest Song Plays Last,” the final play in the trilogy, will begin previews and play through Mar. 19 at the Los Angeles Theatre Center in a Latino Theater Company production. This is the first time all three plays have been performed simultaneously in one city.