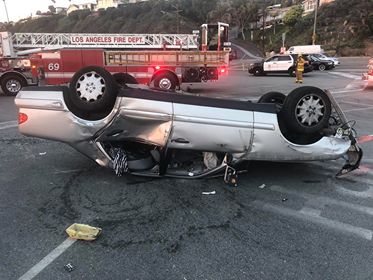 Tuesday evening in Pacific Palisades, a vehicle overturned in the Will Rogers State Beach parking lot, striking and critically injuring a bicyclist.

The accident occurred around 4:32 p.m. in Will Rogers Beach Parking Lot 3, just to the north of the intersection of Pacific Coast Highway (PCH) and Temescal Canyon Road.

The vehicle’s motorist had walked a distance from the scene of the accident before they were found with no obvious injuries. The bicyclist, however, was critically injured, according to Brian Humphrey of the Los Angeles Fire Department (LAFD) West Bureau.

At the time of publishing, the LAFD has not released details on the ages, gender and affiliation of the motorist and the bicyclist. In addition, it is currently unclear what caused the vehicle to overturn.

Palisades News has reached out to the LAFD seeking more information regarding the circumstances of the incident. Stay tuned for more details.