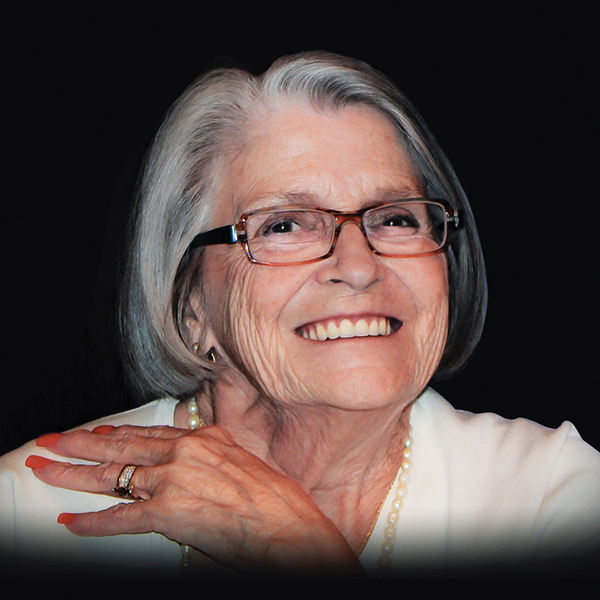 Sara Louise Fanelli, age 83, died peacefully at her Pacific Palisades home on May 6, surrounded by her loving family.

Louise, as family and friends knew her, was born on March 11, 1935 in Wampum, Pennsylvania. She was the daughter of Joseph and Maimee (Freed) Mussi and twin to brother Louis.

Among her earliest endeavors was babysitting a young lad named Joe Namath. She credited his Hall of Fame success in football to her skills as a babysitter.

At 16, Louise met and soon married the late David A. Cantwell. When asked in later years what prompted her to marry so young, she said, “He had a car and was a good dancer. What else do you want at 16?”

Louise was a successful businesswoman, and late in her career started her own finance company. But nothing was more important to her than looking after her four daughters and son. She lived her life as a devout Catholic.

In 1984, she met the love of her life, the late Frank J. Fanelli. She became his wife and a stepmother to his two daughters, Jeanne and Lisa.

Louise and Frank resided in San Bernardino before retiring to Temecula. After Frank’s death on February 21, 2006, Louise moved to the Palisades and her dream home overlooking the Pacific Ocean. From her “perch” she took great delight in watching the sunrise, surfers, sailboats and especially the white caps on windy days.

Louise will be remembered most for her beautiful smile, infectious laugh and that mischievous gleam in her eyes. The joy she emanated will live forever; the warmth she radiated will transcend generations carried on in the lives of her children, grandchildren and great-grandchildren, all who were blessed by their time spent with her. Louise is survived by her twin brother Louis Mussi of Monongahela, Pennsylvania; sister Joanne Brown of Deland, Florida; children Beverly Ricker (George) of Atlanta, Susan Rees (Bill) of South Bend, Indiana, Laurie Rosenthal (Mark) of Pacific Palisades, Nancy Carpenter of Coeur d’Alene, Idaho, and Patrick Cantwell of Pacific Palisades; her grandchildren Elizabeth Carpenter, Kate Bohmann, Danny, Meghan and Tommy Rees, Matthew Rosenthal, Allie Waltz, and Mikey Carpenter; and her great-grandchildren Tatum and Valen Carpenter, Levi, Ben and Sam Bohmann, Guinevere and Whittaker Waltz, and Lena Wells.

It is said that, in the end, the entirety of our lives is represented by the dash between the day we were born and the day we die. For Sara Louise Fanelli, the dash was filled to the brim with adventure, laughter and love in the times spent with her family and friends—a dash well lived, indeed!

There was a service and celebration of life for Louise at the Holy Redeemer Chapel at Holy Cross Cemetery on May 9. As an expression of sympathy, memorial contributions may be sent to Covenant House California in Sara’s name to covenanthousecalifornia.org/donate-now.