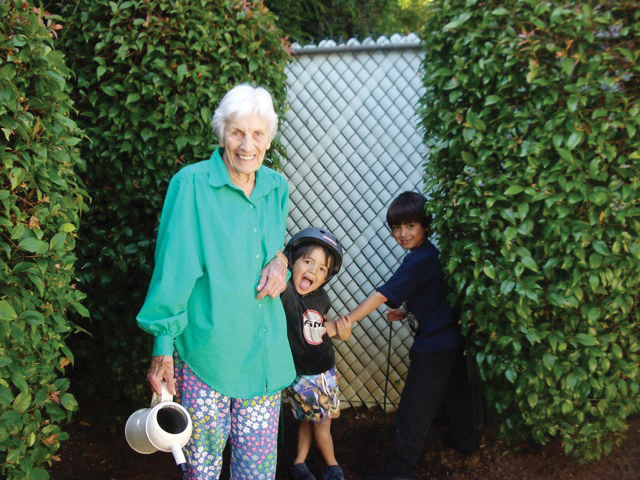 On May 9, longtime Palisadian Margaret “Bonnie” Savage celebrated her 100th birthday. She has lived in her two-bedroom, one-bathroom home in the 1000 block of Hartzell Street since 1947.

Born in 1918 to Paul and Margaret Horick in Illinois, Bonnie had a younger brother, Paul, who passed away in 2013.

In 1944 Savage joined the United States Naval Reserve and served with the WAVES (Women Accepted for Volunteer Emergency Services). She was one of almost 90,000 women who volunteered to serve the Navy while their brothers, fathers and husbands were overseas fighting in World War II.

Her job was to help repair airplanes used during training exercises.

“After I enlisted I went to what they called boot camp and then they sent me to Indiana,” she recalled. “There was an older mother that would train us when we were beginning to learn what they do.”

Savage said that she and the other women she worked with were taught how to fix just about everything on these planes.”We’d get assigned to different parts of the plane— the wings, the engine.”

After the war, Savage moved briefly to St. Louis to help her aunt after her uncle passed away unexpectedly. “They had a place where golfers would stop to eat on the ninth hole,” she said, and she knew that the combination of waitressing/cooking and working for a close relative wasn’t how she wanted to spend her life.

In 1947 Savage was invited to California by Joe (Josephine), a friend from the WAVES. “During the service we called her ‘mom’ because she was older,” Savage said.

Joe and her husband took Savage on a tour of California and introduced her to her future husband Alan Savage, an architect who lived in Pacific Palisades. Soon they were married and living in marital bliss.

At the time, the Palisades was mostly open space with homes scattered here and there. Savage remembers walking across a large field to get to Hughes Market (now Ralphs) on Sunset.

“Our street here was the biggest street in the area,” she said.

Alan died in 1968 at the age of 50, leaving Savage alone. The couple did not have any children. However, a year later she opened a daycare center at her house for local young children, and this was a success for 20 years.

Savage retired in 1988 at the age of 70. She then dedicated herself to working in her garden and helping her neighbors with their children and grandchildren.

Cheryel Kanan has been Savage’s neighbor since Kanan and her husband Dan moved in across the street in 1963. The two women became close after Kanan’s mother died soon after Savage’s husband. They have nurtured a close, mother-daughter relationship.

Kanan says that Savage has been embraced by her neighbors, who all periodically check up on her. “She became grandma to all the children in the neighborhood,” said Kanan, who finds Savage amazing and is grateful for their friendship. “She’s my mentor and my hero.” Savage laughed and shook her head. “I don’t think so.”

The kindly lady celebrated her 100th birthday surrounded by her friends and neighbors of all ages. “I’m still going,” she said. “Although I don’t know how well.”

When asked the secret to her longevity, Savage paused a moment and then answered: “Just living, with all the neighbors’ help.”

By May 21, 2018
in Uncategorized
Related Posts
Comments
Leave a ReplyCancel reply