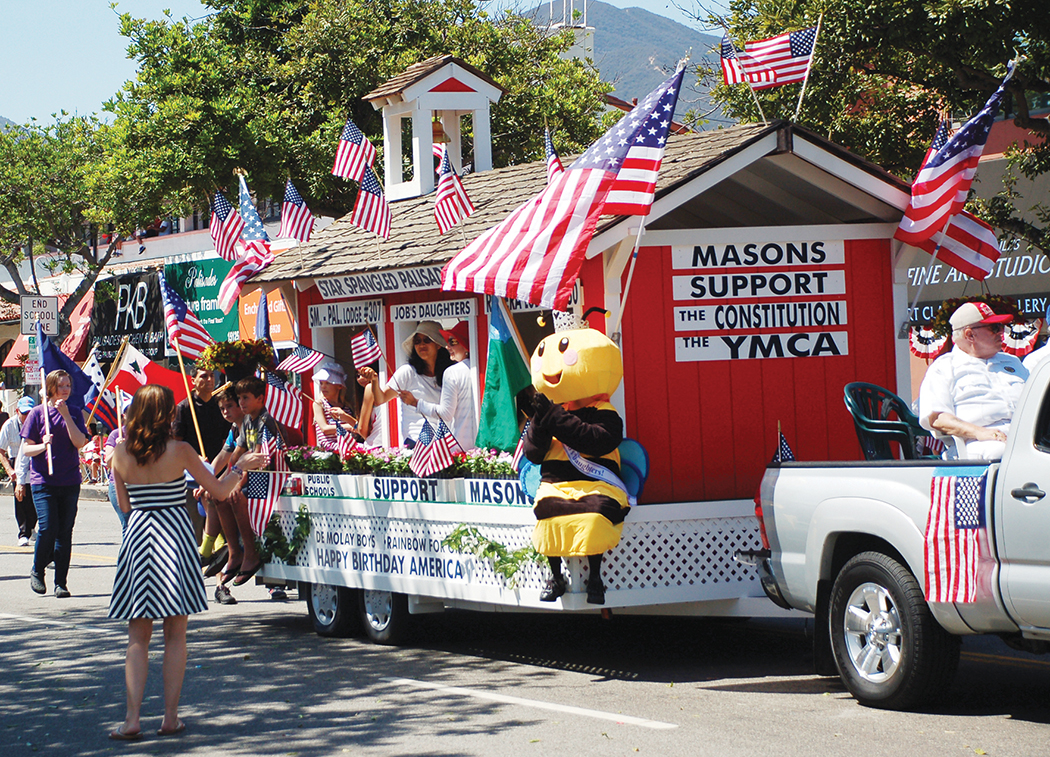 The Little Red Schoolhouse, long featured in the Palisades Fourth of July Parade, was built by Lionel Ruhman of the local Masonic Lodge, a group that prizes public education.

“Since 1920, the Masons of California have backed or promoted public schools,” said Ron Hart, a 48-year member and current Master of the Lodge. “We were mainstays in the founding of Public Schools Week and Public Schools Month, which is April . . . Everybody’s got to get a good education.”

Ruhman, a member of the Palisades Americanism Parade Association, died on March 1. The Little Red Schoolhouse will have a tribute to its builder, who is remembered on page 40 of this program.

The Riviera Masonic Lodge 780, which will celebrate its 60th anniversary next year, is part of the fraternal organization started in 1717 in England and brought it to the U.S. by settlers.

Locally, the Masons annually provide $1,000 to $2,000 scholarships for six to 10 Palisades High graduates and $2,000 to $5,000 to each of the booster groups for the five local public schools. In addition, the lodge contributes to the Boy Scouts, the Village Green, the Palisades-Malibu YMCA, Meals on Wheels, Westside Food Bank, and the downtown Midnight Mission homeless shelter.

The members, who number just over 100, meet monthly at the American Legion to conduct business. The organization has three levels of Mason—apprentice, fellow craft and master mason. Members must be men at least 18 years old and “be of good report,” Hart said. The organization is faith-based, but not religious, so members must “believe in a supreme being, but could be Muslim or Hindu or whatever.” The group does not seek members, but instead people who are interested seek out the Masons.

“You have to say, I’m interested, give us an application, get voted on, and then brought in,”said Hart, 81, a master mason. “It has to be of your own free will and accord.”

Three connected organizations are Order of the Eastern Star, which includes both men who are master masons and women with some affiliation with Masons, ranging from a wife or daughter to a great-great-granddaughter of a master mason. Job’s Daughters and Rainbow Girls are youth organizations for girls and young women from 10 or 11 to 20, who can then join Eastern Star upon leaving their youth group.

Secrecy is also historically part of the organization. Originally, “Masons would build cathedrals and houses, and people didn’t know how they did it,” Hart said. Masons “understood the laws of geometry before they were common knowledge . . . Signs were kept secret, so you could prove that you were what you said you were.” In addition, “what you say from one Mason to another stays secret.”

In today’s world, the traditional secrecy “really isn’t true anymore,” but other aspects of the group’s historical roots have remained, Hart said. For example, being an honorable person is important to Masons, who also value wisdom, strength and beauty. Charity has also been integral to the group through historically providing for the elderly and orphans.