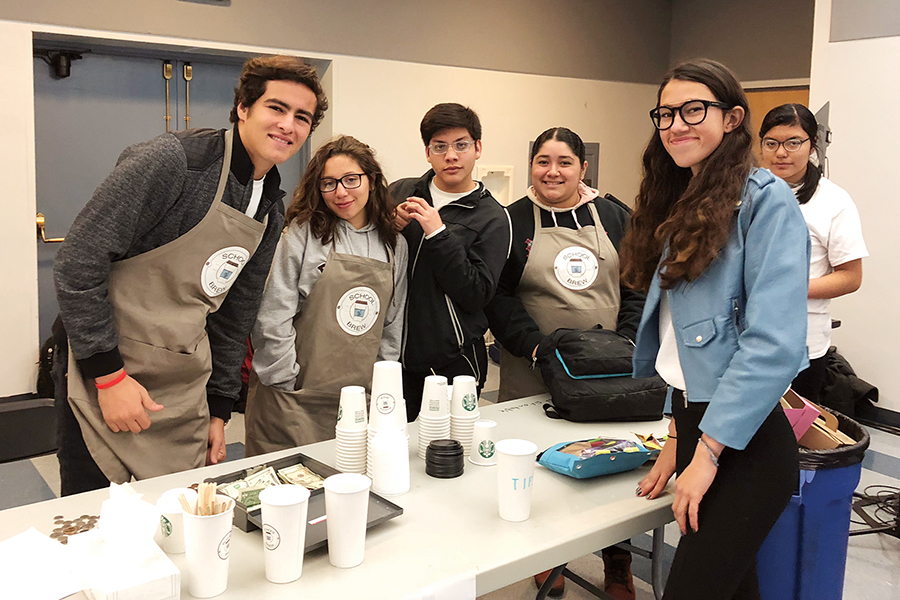 Students sold coffee and T-shirts and held a raffle of several basket items. They also plan to go door-to-door or set up a booth at the Sunday farmers’ market on campus to sell See’s candy and Popcorn Factory products. The goal is to raise money for travel expenses to attend a national competition in New York City in April.

Senior Amanda Thompson said the elective class, held periods two and four, is not like a regular class with the “teacher telling us what to do for step one, step two.”

Virtually, the students are given seed money and then have to create a business and figure out the cost of running it, including paying salaries, building costs and utility bills.

“We get a lot of freedom to figure it out,” said Thompson, who explained that the class develops a business and each student has a job—in her case, creating the website.

Junior Leah Radow, the CEO of School Brew, said the virtual business of selling coffee to students on campus came about because of an observation.

“We asked people why they were late for class and noticed that many of them had coffee in their hands,” said Radow, who not- ed that with heavy class loads and late-night studying, many students need to start the day with java.

The class priced coffee at Starbucks and realized if they sold coffee on campus, via little tubes (that look like mini-test tubes), people could add their own water and only pay $1.50 for a large coffee (venti).

“You can custom the amount of coffee you want in your cup,” Radow said, “and a month’s subscription to the service would be $46.50.”

Interestingly, the Village Starbucks store gave them complimentary coffee to sell for the show—since it was a virtual business. For more information, visit schoolbrewcoffee.wixsite.com.

Senior Dylan Nobel, who is on the Moda Apparel team, said all of the artwork for the company comes from Pali art students. The team was selling a Unity T-Shirt, other  shirts and hoodies.

“There’s no class like this at Pali,” said Nobel, who with his twin brother Allen—on the School Brew team—won gold medals for salesmanship at the recent state competition in Bakersfield. “This allows us to become young entrepreneurs, develop business skills and learn teamwork in a business setting.”

Sophomore Dava Hand, who won gold for her elevator pitch at the L.A. Tradeshow in Pasadena in February, said that when she enrolled in the business class she thought it would be just a regular class, but instead “this has given me the opportunity to see what actually running a business is like.”

Exactly what is an elevator pitch? For those who have watched the television show Shark Tank, the concept is the same. Hand had just a minute to convince judges to invest in Moda Apparel. Even though she had prepared a speech, she believes her presence helped her win.

“Judges said I sold them on me and that’s what pitches should be,” Hand said.