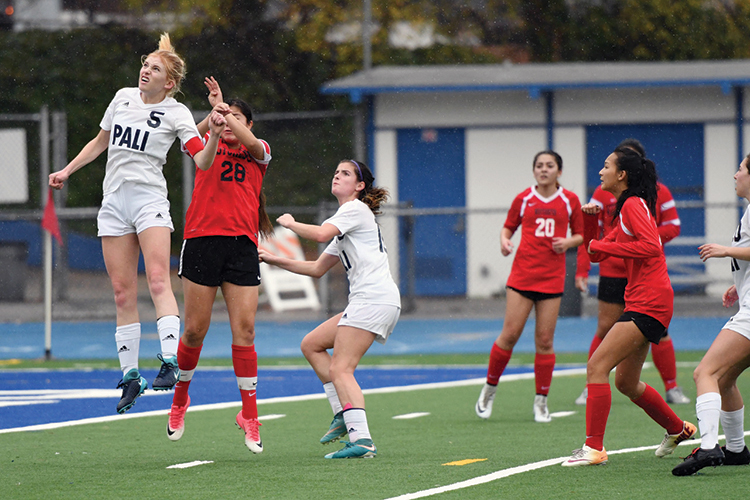 The Dolphins, who are virtually unbeaten in Western League action year after year, roared past Westchester, 3-0, and LACES, 7-0, as league play got underway two weeks ago.

The Dolphins didn’t face another opponent until the first week of January, when they lost to Valencia 2-1 and Harvard-West- lake, 5-0.

“These games were our first since November 30,” Chambers told the News after the Harvard-Westlake loss. “Between the fires, finals week and the winter break, we haven’t been able to prepare for this week’s games.”

The speed of play in the Harvard-West- lake match was fast and intense. “I thought we had some good spells in the game, but they are a very good side with five or six individuals that are way better than anything we’ve come across in the past few years,” Chambers said.

“The main aim for me was to get minutes for as many players as possible and expose them to the highest level of high school soccer. I believe that playing against teams like HW is a fantastic learning experience for the girls. The speed of play and athleticism of HW was way above what we’re used to but hopefully the girls will take something positive away from the game.”

On January 6, Pali played El Camino Real to a 0-0 tie, which was significant. When the Dolphins enter the city playoffs, they generally must face Valley teams like El Camino or Granada Hills in the final round or two. (Last year they lost in the semi-finals to Granada Hills in triple overtime. Granada went on to win the championship, defeating El Camino 2-1.)

“Ava [Kerkorian, a sophomore mid-fielder] was good and Jordan [Darrow, a junior forward] worked hard,” Chambers said. “Frankie [Van Norden, a junior defender] went up and down the sidelines.”

One of Pali’s top strikers from last year, Daniela Flores, is playing Academy, which means she’s not allowed to play high school. “I think all the ‘stronger’ teams have lost players this year because of the Academy issue,”Chambers said,“which means it closes the gap between the top teams and the next level of teams.” (U.S. Soccer has a Girls Development Academy for top players and bans them from playing high school ball.)

The Dolphins had two top-notch goalies last year, Katie Wilkes and Kat Nuckols, who are both playing for their college teams, UC San Diego and Bates, respectively. Their successor is senior Rachel Phillips, who played on the girls varsity basketball team last year, instead of the soccer team.

Nine of the 21 players on the roster are seniors.

Pali played at home on Jan. 17 against league-rival Venice, and traveled to Fairfax on Friday.