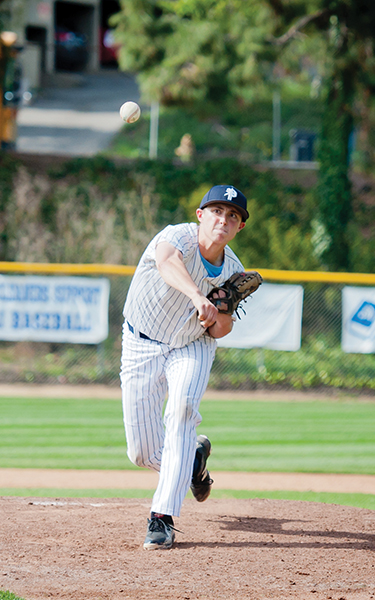 Every spring break, in order to gain experience against top teams from California and Nevada, the Palisades High School baseball team participates in the Lions Invitational High School Baseball Tournament in San Diego.

Founded in 1951, the Invitational is the oldest and largest high school tourney in the country. Games are played over four days by more than 130 teams at fields all over San Diego County.

Palisades Head Coach Mike Voelkel has some good pitchers this year. In addition to Jared Brecher, he also has junior Will Coquillard, who pitched well on March 26, striking out 8 in six innings as the Dolphins won their tournament opener against Carlsband, 12-4.

The next day, Pali lost 10-2 to Montgomery (San Diego), with sophomore Miles Kirshner and juniors Brecher, Kent Johnson and Chris McCullough all taking a turn on the mound.

The Dolphins next defeated Desert Oasis (Las Vegas), 7-2, behind the pitching of Josh Barzilai and Lucas Braun, to win their division and advance to the semifinals.

Francis Parker (ranked 76 in California) lost to Poway (ranked 48) in the championship game, 8-4.

Back on March 19, PaliHi opened Western League play by beating Hamilton at home, 9-5, as Brecher pitched five innings and struck out five.

The Dolphins trailed 4-2 in the bottom of the fifth, when their bats suddenly warmed

up. Ten hitters came up and, helped by a Hamilton error, two walks and some good base running, Pali scored six runs.

With the bases loaded, catcher Benji Taylor hit a two-run double, and Barzilai scored another run with a sacrifice fly. After a walk, outfielder/pitcher Kent Johnson hit a deep fly to center to drive in a run.

In addition to two league games a week in April, PaliHi will participate in the Tigers Tournament on consecutive Saturdays against Marshall, Cleveland, Banning and El Camino Real.