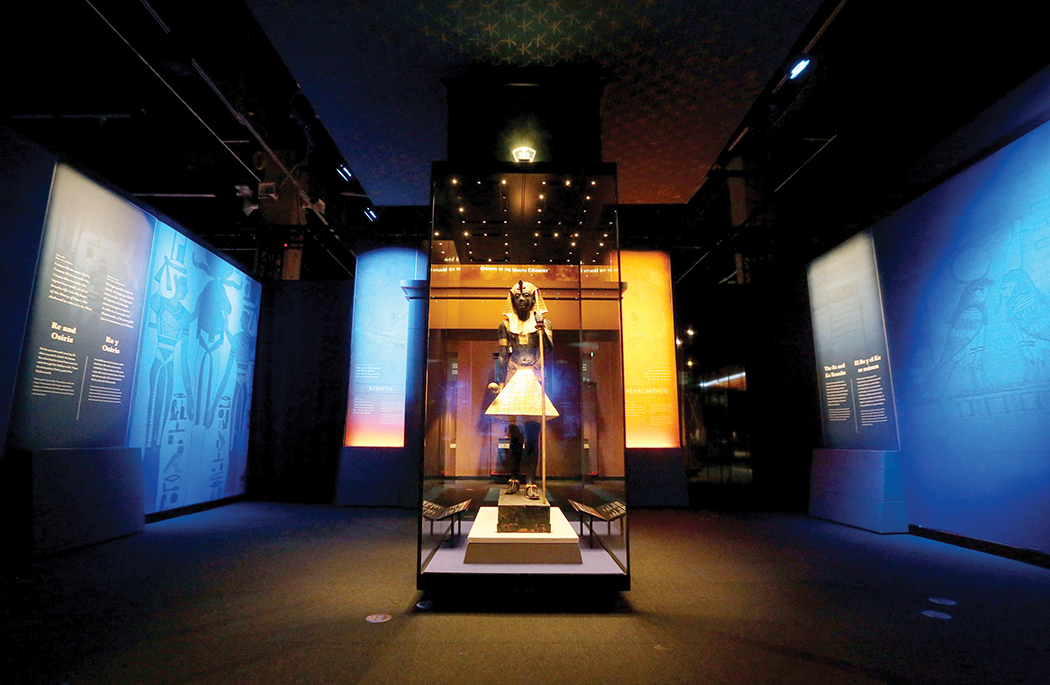 King Tut became today’s most well-known pharaoh due to an odd circumstance; his successors tried to erase his name from existence.

They literally removed Tutankhamun’s name from statues and the historical record, which meant that his burial place was so obscure that it was never unearthed by tomb raiders.

Instead, it lay unmolested for 3,300 years until English archaeologist Howard Carter became convinced that this little-known pharoah’s tomb lay hidden somewhere in Egypt’s Valley of the Kings.

During a final effort to find it in 1922, an Egyptian water boy exposed the step leading down to the boy king’s tomb. The water boy, Hussein Abdel-Rassoul, then ran to report his finding, and soon Carter and his crew had uncovered the final resting place of the young pharaoh who ruled from the age of 9 to 19 in approximately 1324 B.C.

This story of the discovery of Tut’s tomb plus more than 150 of the objects they uncovered are on display at the California Science Center until January 6, 2019. This world premiere of the exhibit, which is deemed by the organizers as both the last and largest touring King Tut exhibit, contains more than 150 items from the tomb, including 60 which have never previously been seen outside of Egypt.

As part of the 100-year anniversary of the tomb’s discovery, the exhibit will travel throughout the world for several years and eventually land in the newly built Grand Egyptian Museum outside Cairo, which will house the entire Tutankhamun treasury of more than 5,000 objects.

If the second week is any indication, the traveling exhibition will be extremely popular. There were long lines simply to enter via timed tickets, and many shows of the connected IMAX film, Mysteries of Egypt, which also showcases the tomb and its discovery, were sold out days ahead of time.

The exhibit is divided into two parts. The first and biggest takes up the third floor of the science center and includes the majority of the tomb objects. Neither Tut’s mummy nor his death mask, which will no longer travel outside of Egypt, are present.

Still, many of the included objects, such as a small, detailed coffinette also used to illustrate the exhibit poster, are illuminating not only of Tut’s tomb contents, but also of ancient Egyptian lore and culture.

Phrases from the Book of the Dead, the collection of spells which guide the deceased through the afterlife, are sprinkled throughout, and many of the ancient rituals connected to a pharoah’s presumed trip to the underworld are mentioned.

For example, Tutankhamun’s tomb included canonic jars, which preserved organs like his liver, as well as 413 shabtis, small statuettes, which comprised a miniature workforce intended to be animated using a spell so they could serve him in the afterlife.

Gilded statues, lapis lazuli jewelry and alabaster pieces are some of the other objects presented, as are both a ceremonial bed and trumpets likely used at his funeral plus a life-size guardian statue with gold leaf clothes and obsidian eyes.

While his mummy is not present, many of the objects that lay between its linen layers are available for view.

In addition, gold toe caps, gold sandals and gold bands that decorated the mummy are placed on a mummy replica, which mesmerized the attention of many of the visitors of all ages who crowded around it for extended time periods.

While the tomb and the underworld dominate this first section, fans of history and archaeology may be particularly intrigued by the smaller exhibit on the first floor. This section details the search for the tomb by Carter and shares the story of the water boy, who later made his living off his moment of discovery.

In addition, the mummy’s curse, which was blamed for the deaths of certain tomb discoverers, is explored, and several choice objects are displayed, including an elaborately-decorated gilded shrine with engraved pictures of Tut and his wife, Ankesenamun, who was also his cousin, enjoying tender moments together.

A final giant quartzite stone statue of Tutankhamun completes the exhibit. The statue, which probably once stood outside his mortuary temple, provides a fitting send-off to both visitors and the boy king. Tickets range from $17.97-$35.45(with IMAX movie).

By May 2, 2018
in Uncategorized
Related Posts
Comments
Leave a ReplyCancel reply