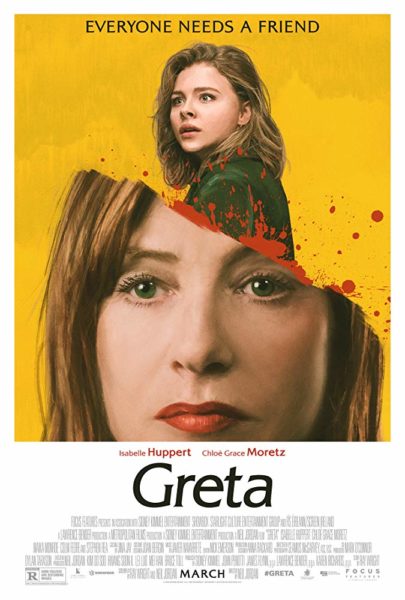 This movie is a conundrum. The story is horror-thriller-mystery. The real mystery is why it doesn’t quite generate the edge-of-your-seat involvement that I believe it is meant to achieve. There are many facets of the movie that are beautifully done. However, as a whole, the film left me a bit underwhelmed.

Isabelle Huppert endows her enigmatic lead role of Greta with fierceness and deep-seated mental instability that keep the anxiety level on high. Greta definitely “has a screw loose” and hides this fact with consummate skill. The complexity of the role for a woman of her age is gratifying to see. She is paired with another extraordinary actress who started acting as a child and is still in the early stages of her career, Chloe Grace Moretz. She masterfully plays Frances, the proverbial “innocent” opposite the evil Greta.

I believe Neil Jordan is a fine writer. He wrote the screenplay for “Greta” with Ray Wright. The characters are drawn sharply. In one scene Greta beats the hands of her captive piano student with a stick. This brought back vivid memories of my second grade piano teacher, Miss Prigge, who actually did just that – needless to say my classmates and I hated that class.

However the story seems simplistic and full of plot and character holes. Frances at one point admits to her more sophisticated roommate Erica, played with nuance by Maika Monroe, that she lacks streetwise instincts because she is from Boston. What? Boston, last I looked, is a big city. It would have been more appropriate if she were from Cape Cod or a small town in Western Massachusetts.

Frances keeps doing foolish things to keep the plot moving, yet she says she graduated from Smith College. I thought you had to be intelligent to go to Smith. She is a waitress in a very high-end restaurant in Manhattan. That’s a job where you have to think fast and make instantaneous decisions. I kept losing my concentration, having to say to myself, “What? She wouldn’t put that there…” or “She wouldn’t say that.” There is a major clue that gives away the evil to come that is way too obvious. The sadistic and scheming Greta would never have allowed that.

In general I found that the characters did not act instinctively, and this was the fault of the screenplay, not the actors. I also would have liked to see the positive aspects of the relationship between Greta and Frances developed further before the bond turns evil. I would have been more invested in the two women, therefore more afraid for Frances.

As a mystery/psychological thriller, “Greta” has its flaws. However it’s worth seeing to watch the performances of two superb actresses whose careers began some 34 years apart.

Kathryn Whitney Boole has spent most of her life in the entertainment industry, which has been the backdrop for remarkable adventures with extraordinary people.  She is a Talent Manager with Studio Talent Group in Santa Monica. kboole@gmail.com