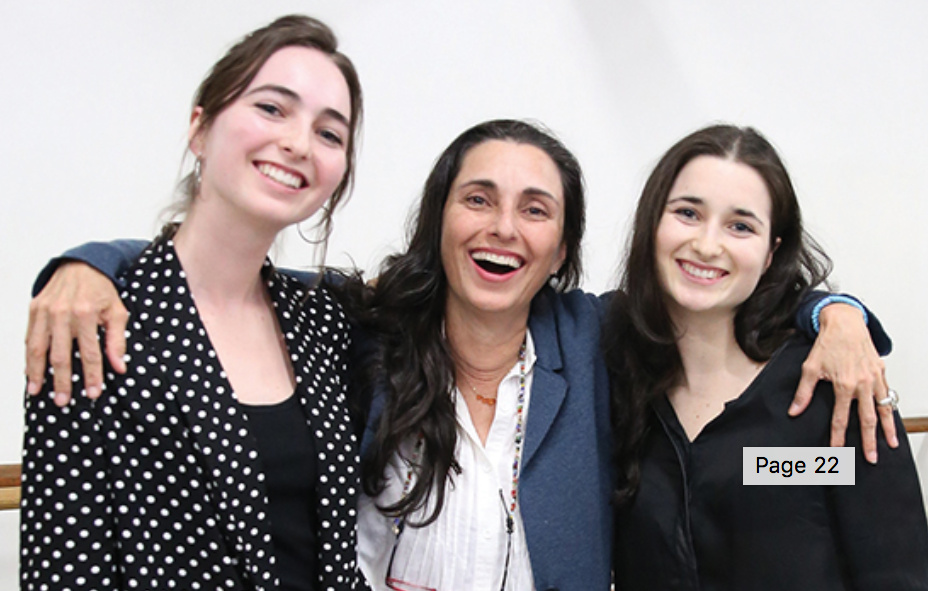 Enthusiastic, delightful, smart, balanced—and pretty—are only some of the adjectives that describe Lucia Connolly, 20, and her sister Paloma, 22.

The sisters spoke to younger students and parents at the Westside Ballet School on March 5 as part of the school’s Dance Talk series.

Both girls advanced to the highest levels of ballet at that school, yet one shifted her focus from dancing to college, while the other is a member of the Joffrey Ballet Company.

Paloma Connolly, who was named after ballerina Paloma Herrera, took her first ballet class at the Palisades Recreation Center. Her teacher recommended she continue training at Westside Ballet.

Lucia watched from the sidelines, and when she was old enough she also took classes at the Palisades Rec Center before moving to the ballet school in Santa Monica.

The two sisters, who grew up in Pacific Palisades, danced most of the roles in the school’s major production, the “Nutcracker,” including the Sugar Plum Fairy.

Now, Paloma, who graduated early from UC Santa Cruz in March 2017, with a major in feminist studies, is working in administration at Westside Ballet.

Lucia (5’5”) is a member of the Joffrey Ballet Company in Chicago and is on tour in Los Angeles this month.

Paloma attended Palisades Elementary, Wildwood Middle School and Palisades High School. She took dance classes after school, and by the time she entered high school, she was in the studio three hours a night dancing, and six hours on the weekend.

Before her freshman year at PaliHi, she was invited to the San Francisco Ballet School summer intensive and was asked back the next summer.

“In 2011, I went to School of American Ballet before my junior year,” Paloma said. “A teacher was giving a tendu combination and I realized I never had to do another tendu again if I didn’t want to.” (The leg extends with the foot pointed, but the foot never leaves the floor.)

“I thought about that the rest of the summer,” said Paloma, who already knew she would be dancing the Sugar Plum Fairy that fall.

“It gets difficult to balance everything,” she said. With the longer hours devoted to danc- ing and even longer hours to AP and honors classes, she decided to focus solely on aca- demics after she finished her performances.

“I didn’t regret my decision,” she said. “But when I went to college, I started to miss dance. There’s nothing like ballet.”

Paloma credits dance with her success at Santa Cruz. “I appreciate Westside and the work ethic it instilled in me,” she said. “The discipline and working hard that I used in dance, I directed to my studies.”

Younger dancers wanted to know if the two sisters ever felt as if they missed out by spending so much time in the studio. Both talked about missing an occasional birthday party or hanging around after school, but “No,” Lucia said. “When I talk to my friends from high school, I felt like that extra time was overrated. When I was here [Westside], I felt like I was with my friends.”

“Maybe when I was in seventh grade, and my friends were getting French fries at the Brentwood Mart after school,” Paloma said, “and I had to go to ballet. But no, I don’t feel like I sacrificed.”

“Just because you’re a dancer doesn’t mean you can’t be a regular person,” Lucia said.

“Obviously there are things you miss,” Paloma said. “But dance gave me a work ethic. Life would have been different without it.” The family vacations to see relatives in Colombia and Spain revolved around the two dancers’ schedule. But both women emphasized that the drive was internal; it came from them.

“Mom would drive us to practices, but she never insisted we go,” Paloma said.

When their mother tried to figure out a possible family vacation over Thanksgiving, the two girls told her they couldn’t go and she replied, “What? We can’t go anywhere because of the ‘Nutcracker’?”

Lucia, who attended Wildwood Elementary School and Paul Revere Middle School, decided that when she was an eighth grader, she was through dancing and wanted to focus on academics. She was admitted to Harvard-Westlake, but “I got there and decided ballet was for me.”

She went back to the Westside to resume her studies, and auditioned for “Spotlight,” but “I didn’t make it past the first round,” she said. “That was one group’s opinion on my dancing.”

Lucia was one of thousands of high school girls who auditioned nationwide for the School of American Ballet and was chosen to go to a five-week summer ballet boot camp in New York City on full scholarship.

That summer of 2014, “We lived in the dorms [at Lincoln Center], worked with teachers and had two classes a day,” Lucia said. “It was like a five-week audition.”

At the end, Lucia learned she was one of 15 out of 250 who had been chosen to continue dancing at the School of American Ballet in New York that fall. Dancers, while they continue to train, also attend the Professional Performing Arts High School for academics.

“At Westside, even when I did things poorly, I was still nurtured,” Lucia said. “Before I went away to school, I didn’t realize how lucky I was to have Westside. In New York, I was not the favorite. I knew I was not going to dance for SAB, but those opinions were just one group.”

From January through March of the dancer’s senior year, they audition for different professional dancing companies.

Lucia was a “favorite” with Joffrey officials. “I started dancing with the company in April 2016,” she said, noting it was initially a five-week contract as well as a contract for the 2016-17 season. Contracts run from the end of July to mid-May, and her contract was renewed for the 2017-18 season.

“I have a full-time job, I get health benefits and money to travel,” Lucia said, noting that the majority of dancers don’t go to college before going into this career. That, she said, is not a reflection of intelligence, but rather practicality. Most dancers retire at 35, and if they spend four years in college, one quarter of their career is gone. About the Joffrey, “It’s a blast,” Lucia said. “It’s an incredibly hard-working group of people.”

In the dance world, young women are constantly being compared to one another, and students wanted to know how the Connolly sisters dealt with that aspect of dance and life.

She told the News that “In ballet, the ideal foot has a high instep and points with a big arch, so if you have flat feet you don’t have ‘good’ feet.”

Paloma said initially it bothered her until she realized “There are just girls better than you—and that’s the way it goes.” That all she could work on was who she was and what she had control over.

“One of my worst qualities is I always loved being the best,” Lucia said. “When you get to the top levels, that’s not possible. There are girls who are skinnier, who have better feet: but that’s life. You have what you have.

“What is the point of what the girl next to you is doing?” she asked. “As you start going up in the dance world, you realize everyone is not perfect.”

Lucia emphasized she has no control over another person, but rather “I can always get better.”

The young women grew up on Radcliffe and are the daughters of Justin Connolly and Clara Londono. Brother Gabriel also graduated from UC Santa Cruz and is now working in real estate.

Lucia Connolly is performing in Los Angeles with the Joffrey. “Romeo and Juliet” has closed, and “Orphee et Eurydice” at the L.A. Opera ended on March 25. Reviewer David Gregson called it “one of the loveliest stage productions of any kind that I have seen in ages.”