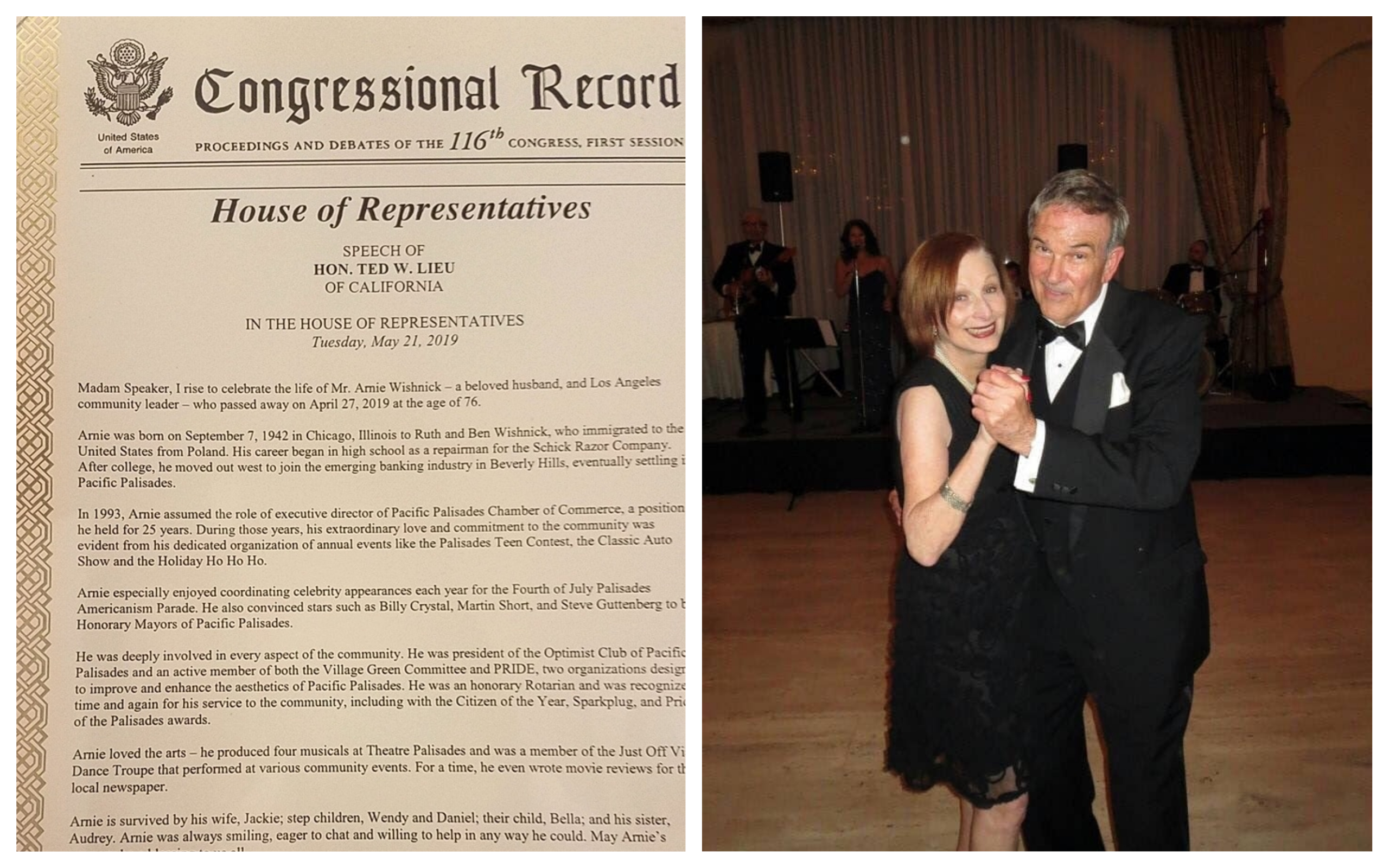 Congressman Ted Lieu, who represents California’s 33rd District which includes Pacific Palisades, honored cherished Palisades community figure and leader Arnie Wishnick in a speech to the United States House of Representatives May 21. Here is the text of the speech, which enshrines Wishnick’s memory forever.

“Madam Speaker, I rise to celebrate the life of Mr. Arnie Wishnick – a beloved husband, and Los Angeles community leader – who passed away on April 27, 2019 at the age of 76.

Arnie was born on September 7, 1942 in Chicago, Illinois to Ruth and ben Wishnick, who immigrated to the United States from Poland. His career began in high school as a repairman for the Schick Razor Company. After college, he moved out west to join the emerging banking industry in Beverly Hills, eventually settling in Pacific Palisades.

In 1993, Arnie assumed the role of executive director of Pacific Palisades Chamber of Commerce, a position he held for 25 years. During those years, his extraordinary love and commitment to the community was evident from his dedicated organization of annual events like the Palisades Teen Contest, the Classic Auto Show and the Holiday Ho Ho Ho.

Arnie especially enjoyed coordinating appearances each year for the Fourth of July Palisades Americanism Parade. He also convinced stars such as Billy Crystal, Martin Short, and Steve Guttenberg to be Honorary Mayors of Pacific Palisades.

He was deeply involved in every aspect of the community. He was president of the Optimist Club of Pacific Palisades and an active member of both the Village Green Committee and PRIDE, two organizations designed to improve and enhance the aesthetics of Pacific Palisades. He won an honorary Rotarian and was recognized time and time again for his service to the community, including Citizen of the Year, Sparkplug, and Pride of the Palisades Award.

Arnie loved the arts – he produced four musical at Theatre Palisades and was a member of the Just Off Via Dance Troop that performed at various events. For a time, he even wrote movie reviews for the local paper.

Arnie is survived by his wife Jackie; step children, Wendy and Daniel; their child, Bella; and his sister, Audrey. Arnie was always smiling, eager to char and willing to help in any way he could, May Arnie’s memory be a blessing to us all.”