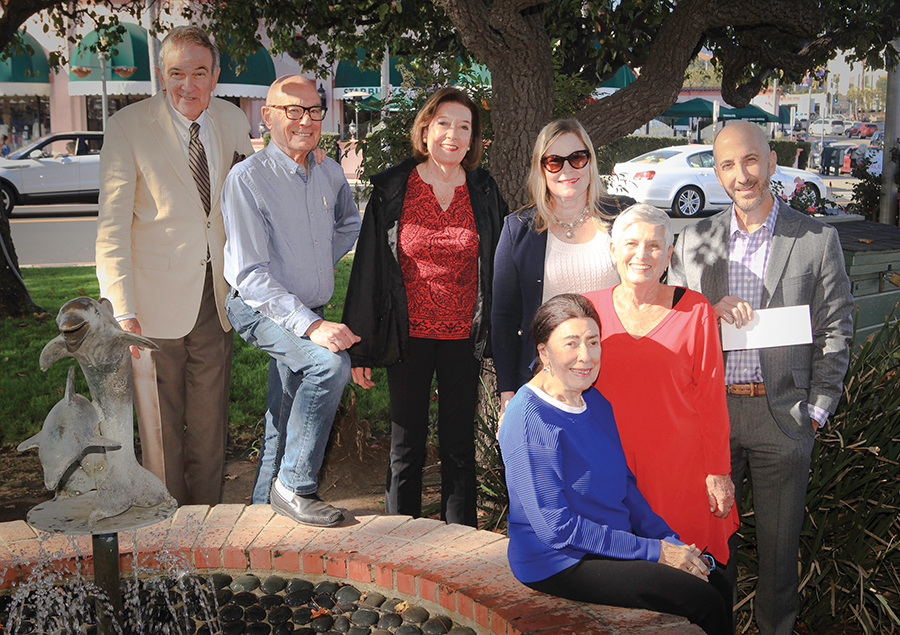 Everyone in Pacific Palisades has met friends at the Village Green, let their children play by the fountain, waited for a Metro or Santa Monica Big Blue bus or just driven by the little triangular park at Sunset, Swarthmore and Antioch.

Many praise the city of Los Angeles for the upkeep of the carefully landscaped pocket park.

But those kudos are misdirected, because the private park is maintained and financed by a committee of Pacific Palisades residents. About $12,000 is needed annually to cover the gardener, the DWP bill, liability insurance, lawn care, tree trimming and maintenance on the benches, fountain and lights.

On January 5, realtor Anthony Marguleas, owner of Amalfi Estates on Monument, gave a check for $5,000 to help defray costs and support the Village Green Committee.

The park was originally designed by the Olmsted Brothers in 1923, a year after Pacific Palisades was founded.

Beginning in 1857 with the design for Central Park in New York City, Frederick Law Olmsted, his sons and successor created designs for more than 6,000 landscapes across North America, including many of the world’s most important parks.

The Olmsted Brothers also co-authored, with Harland Bartholomew, a 1930 report for the Los Angeles Chamber of Commerce entitled “Parks, Playgrounds, and Beaches for the Los Angeles Region,” which encouraged the preservation of outdoor public space in Southern California.

According to historical records, the report was largely ignored by L.A. city officials, but eventually became an important urban planning reference.

The city eventually leased the Village Green property to Standard Oil and the park was converted to a gas station in 1945.

Palisades residents dreamed of having their park restored in the heart of town and in 1968 contacted the oil company, which had a lease through 1972.

Standard Oil did not renew its lease and the fledgling Pacific Palisades Community Council established a Village Green Committee (Robert McMillin, Margaret Wylie, Wally Miller, Robert Abernethy and Arvin “Pete” Ahrens). A lease was signed giving the Committee an option to buy the land if funds could be raised.

Initially, the committee planned to give the Village Green to the city, but eventually it was decided that ownership would be maintained by the Village Green Committee, which is managed by a volunteer board of directors. Hence, the importance of charitable donations.

Joan Graves, a longtime committee member, is the Village Green president this year. “I believe the Village Green is more important now than ever,” said Graves, whose late husband was actor Peter Graves. “We represent the link between the old and the new Palisades and are an example of what a community can do when the citizens work together. We would not be able to maintain the Green without financial help and we are so grateful to Anthony for his generosity over the last five years!!”

Volunteers meet once a month to tidy the park. “We had an amazing volunteer, John Steadman, who built a new storage shed, so our supplies are now there,” VG Secretary Marge Gold said.

She noted that in addition to Marguleas’ donation, grants have been received from the Pacific Palisades Woman’s Club, the Palisades Optimist Club and the American Legion. “In the past, rotary has been a donor and also the Masons.” Neither PRIDE, nor the community council, have donated to the park.

“As always, Anthony’s check was extremely welcomed and appreciated,” Gold said. “Even though Palisadians have been generous in supporting us, I told him it would be a lot harder to maintain the Green if it weren’t for him. And that’s the truth.”

Marguleas is not comfortable being singled out. “It is not just the act of giving money, but also of good deeds,” he said. “Ever since my four kids were younger (they are now 20, 19 and his twins are 16), I remind them ‘to make a difference in the world’ and to help someone.”

A resident since 1992, Marguleas used to give 100 percent of his commission from two home sales to local causes every year. Now he gives 10 percent of his net proceeds from each sale to a charity of his client’s choice.

In 2012, Marguleas “saved” the Fourth of July parade committee by donating $43,000. A year later, he asked former Palisadian-Post editor Bill Bruns to recommend another worthy nonprofit organization in the community, but one that could benefit from a smaller donation.

Bruns suggested the Village Green, and when Marguleas made his initial donation, Bruns told the News: “Gathering support for our local groups is a huge problem in this town. We have numerous active retirees keeping so many organizations going, but they need financial support from younger professional people. Anthony sets a great example.”

To help the committee build a “rainy day” fund, donations can be sent by mail to Palisades Village Green, P.O. Box 14, Pacific Palisades, CA 90272 or by PayPal or credit card by going to palisadesvillagegreen.org and click on “Contact Us.”