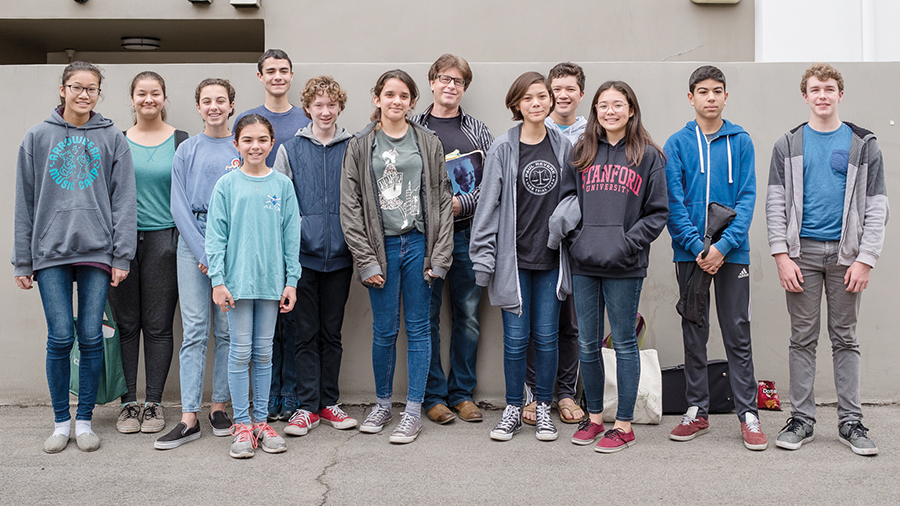 While some of the young musicians in the Los Angeles Youth Orchestra (LAYO) will pursue professional music careers, many others go on to careers in other fields. Either way, the goal for artistic director Russell Steinberg is to build a passion for music for life.

Twenty Palisadians are among the 120 youth in the orchestra, which is divided into two sections—an intermediate group and a pre-professional group. Students are required to study two years with a private teacher before they can audition for the orchestra.

The youth meet on Sundays at the Encino Community Center, where they spend half the time playing with their entire orchestra and half working either with a woodwinds, strings or percussion coach.

Palisades High freshman Charlotte Costain has been playing violin since age 4, and as a member of LAYO toured Vienna and Prague in 2015 and Italy in 2017. “It’s a really good experience meeting kids who come from different schools and different parts of Los Angeles,” says Costain.

For PaliHi freshman Aidan Lee, a mem- ber of LAYO for two years, cello is a more recent endeavor—he began playing as a sixth grader at Paul Revere Middle School.

“Russell [Steinberg] really knows what he’s doing and he chooses excellent music,” says Lee. “I like the people in the orchestra and the coaches are really good.”

Steinberg treats the students like adults. “It goes way beyond the notes,” says the composer and conductor. “I talk to them about how the music is put together, bigger ideas behind the themes.”

The orchestra started almost 29 years ago as a Jewish symphony through Milken Community High School, where Steinberg was the music director.

It expanded over the years, and came to include Jewish and non-Jewish students, ages 8-18, from all over L.A. The orchestra achieved nonprofit status in 2008 and relies on foundations, corporations and private donations to help run its programs.

Palisadian Fati Adeli was so impressed  with the orchestra after her older daughter joined in January 2017 that she joined its governing board a year later.

Her daughters, Leena and Layla, both began violin in first grade with Children’s Music Workshop, an after-school program offered at Palisades Elementary.

Leena, a fifth grader, joined LAYO in August. “I love the challenging pieces and I see how much I have improved as a violin player since joining LAYO,” she says.

Layla, a seventh grader at Paul Revere, says, “The pieces Russell chooses are challenging but fun, and with hard work we are able to sound like a professional orchestra.”

Although Steinberg was initially hesitant to travel internationally with the group be- cause of the expense, he has found that his students gain valuable performance experience beyond their local fall and spring concerts.

He recalls seeing pictures of Mozart and Haydn on Vienna city buses and notes, “The students get to be in other cultures where classical music is revered.” Argentina is next for summer 2019.

it literally rewires the brain, and it takes years to develop. It’s technology that’s thousands of years old and nothing about it is easy.”

The director often speaks before concerts at the L.A. Philharmonic and hears from elderly music lovers who tell him, “I’m so angry with my parents; they let me quit [my instrument].”

Steinberg refers to LAYO, which he describes as “diverse, all cultures, all socio-economic backgrounds,” as “the future of culture in L.A.”