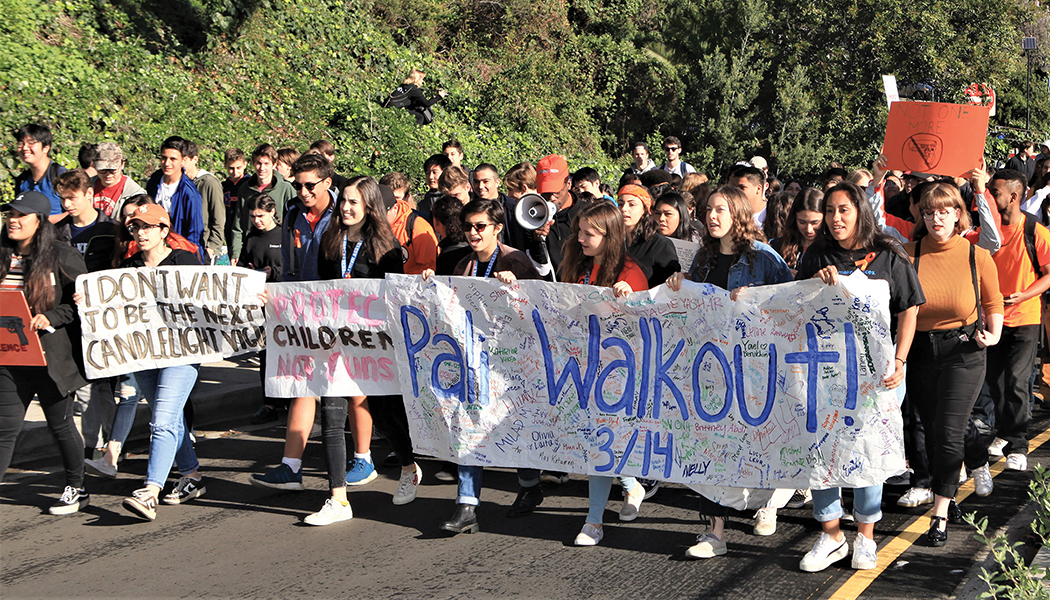 As a retired minister who spent a career working with teenagers, including 20 years here in Pacific Palisades at St. Matthew’s, and now watching my three teenage grandchildren grow up in this uncertain world, I have been filled with pride watching students across the country stand in solidarity with the students at Marjory Stoneman Douglas High School and articulate their anger about gun violence and the need for sensible gun-control measures.

This remarkable outpouring of teenage fury and compassion, now focused on political activism, gives me hope that tougher gun laws will memorialize the 17 people killed by that six-minute, 20-second spree of bullets in Parkland, Florida.

Coincidentally, my wife Katy and I were flying into Ft. Lauderdale on that fateful Valentine’s Day as the shooting in nearby Stoneman Douglas was taking place. When we touched down, a man ran forward yelling “I have to get off— emergency!” He explained that his daughter was hiding in a closet texting him as the sound of bullets were echoing throughout her school. At the gate he was allowed to deplane immediately. We secured our rental car and then discovered the streets and freeways were gridlocked because the shooter was still at large and police were everywhere. We made it to our destination, albeit an hour late, but without further incident.

The proliferation of guns in my lifetime has taken a dangerous and threatening turn across our nation. The glorification of violence and the implacable stance of apologists defending the personal right to arm oneself has deviated far from the original intention crafted in our Second Amendment. Frankly, the inaction from our elected leaders after the Columbine shooting, the Sandy Hook massacre of our most vulnerable, and other mass shootings had led me to walk an unfamiliar path of pessimism.

But then came the national walkout at thousands of schools on March 14 (including the impressive student rally at Palisades High), followed on March 24 by the March for Our Lives in Washington, D.C. and hundreds of cities. Together, they broke my personal morass and re-awakened within me the hope that I have felt my entire life that we can collectively change our most intransigent human behavior patterns.

We can follow the sixth commandment, “Thou shall not kill,” and an easy way to do that would be to eliminate guns. That’s not going to happen, of course, nor is this the time to argue for or against shooting clubs where you entrust your firearm to the custodians of the locked cabinets at the range, or whether the Second Amendment should be revisited. But I believe that keeping rapid-fire, 100-bullet magazines, AK-47s and AR-15s out of the hands of civilians should be a no-brainer for everyone.

Thank you, young people of every color, creed or persuasion, including our 38-year-old daughter Laura, who marched in San Francisco. You have all awakened truth in the hearts and minds of millions about an issue that affects all of our lives on a daily basis.

And thank you, Delaney Tarr, David Hogg and Emma González (just to name three of many)—your passion, poise and words have helped restore my hope and re-confirmed my faith in young people.