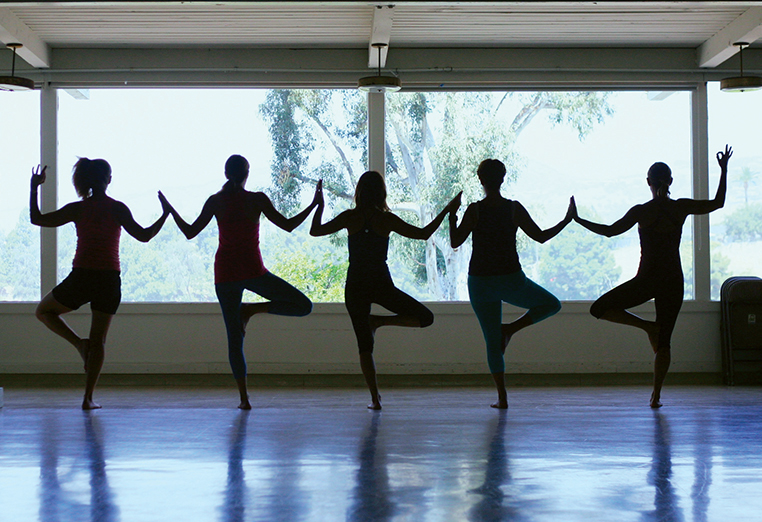 If a doctor offered you a pill that would improve your sleep, help stop the aging process by lowering stress, bolster the immune system and prevent the inflammatory process (which can cause disease), would you take it?

Turns out there may be a pill, but not one you swallow. Those benefits may result from practicing mindful meditation, yoga or tai chi.

Dr. Michael Irwin, a psychiatry professor at UCLA and director of the Mindful Awareness Research Center, spoke about integrative medicine at the Senior Alliance meeting on February 12 at the Palisades Library.

Irwin’s research focuses on the interaction between the immune and central nervous systems and the role of sleep disturbance, particularly with cancer survivors and older adults. But his results have implications for everyone.

According to some estimates, about 50 to 70 million Americans suffer from sleep disorders and about 4 percent rely on prescription medication to fall asleep.

Irwin, a Pacific Palisades resident, said that scientists have found that sleeping pills take away one of the four non-REM sleep cycles (followed by REM sleep), which means missing one of the essential cycles.

Non-REM sleep includes Stage One, which happens within minutes of falling asleep, when the brain produces alpha and theta waves; Stage Two produces an increase in brain-wave frequency known as sleep spindles; Stage Three is deep sleep; and in Stage Four the brain produces delta waves (which experts believe is when the body repairs muscle and tissues, which boosts immune function).

REM is when dreaming occurs and is thought to play a role in learning and memory function. The length of each cycle depends on a person’s age.

Irwin said that sleep deprivation, sleep disturbances and insomnia can lead to increases in inflammation, which is a key risk factor for diabetes, cardiovascular disease, cancer, rheumatoid arthritis, depression, morbidity and mortality.

In a 2012 paper, University of Rochester neuroscientist Maiken Nedergaard and colleagues discovered a waste-disposal system in the brain, in which toxic metabolites such as beta amyloid—associated with Alzheimer’s and other neurodegenerative diseases—are flushed out by cerebro spinal fluid with the help of support cells called glia. That system turns on during sleep.

Nedergaard said, “It’s been known for years that diseases like Alzheimer’s are associated with sleep disturbances. But maybe physicians should be treating sleep to slow the progression of the disease.”

Nedergaard said, “Because it fits, right? If you don’t sleep, you don’t clean your brain.” Irwin also noted that “physicians may treat cardiovascular issues, but never learn that you aren’t sleeping well,” which might affect one’s heart problem.

The American College of Physicians recommended in 2016 that cognitive behavioral therapy for insomnia (CBT-I), a behavioral approach that targets poor sleep behaviors and dysfunctional worries about sleep, should be used as a first-line treatment for individuals with chronic insomnia, rather than sleeping pills.

CBT-I is cognitive behavioral therapy that includes regular, often weekly visits to a clinician (four to six weeks), who gives a series of sleep assessments, requires a sleep diary and has sessions with the patient to help change the way he/she sleeps.

Irwin wondered if there was a way to treat sleep disturbances that would be as effective as CBT-1 and which could be delivered in the community, with greater access and lower cost.

In a sleep study presented in the JAMA Internal Medicine journal, Irwin said people were divided into three groups, each receiving a different sleep technique.

1.) Those in the sleep hygiene education group were told to avoid using iPads, e-readers, phones, computers or any other device emitting blue light (it alters circadian rhythms) before bedtime. They were also told not to watch television in bed, that the bedroom was only to be used for sleep and sex. They were also warned that alcohol im- pairs sleep.

2.) The second group was taught mindful meditation, which is defined as learning to be present in the moment. A person learns to focus on his/her breath, and the practice can be done for as little as five minutes to 20 minutes every day.

Both groups improved, but the mindfulness subjects improved the most.

Irwin is also exploring other alternatives, such as tai chi and yoga. He said that cancer survivors often have sleep problems, particularly those who have had breast cancer.

“Forty percent of those women, even after treatment, will continue to have sleep problems,” said Irwin, who noted that in a five-year study, “women who used tai chi had an overall improvement in their health and a lessening of fatigue and depression.” Importantly, tai chi treatment yielded improvements in insomnia that were comparable to the benefits of CBT-I.

He said the inflammatory system is important for the primary fight-or-flee system, and that this hard wiring has been carried down through the centuries.

“When people have hyper levels of stress, they have diminished low waves of deep sleep,” Irwin said. “But today we are no longer threatened by lions. Now we’re exposed to social threats. Those threats, including isolation and loneliness, can activate inflammation.”

Practicing tai chi pays off, he said, because it causes “a downregulation of active genes,” which means “a decrease in inflammation, which will slow aging.”

People who are depressed have a lower level of immune response, according to Irwin. In one study, only about half of the people who received the Zoster herpes vaccine (shingles), produced an immune response, which means the other half did not receive the necessary prevention. But a study showed that when people who had practiced tai chi for about 16 months were given the shot, they got the desired result.

Irwin believes that practices such as mindful meditation, tai chi and yoga can lead to a better immune response, better sleep and less inflammation.