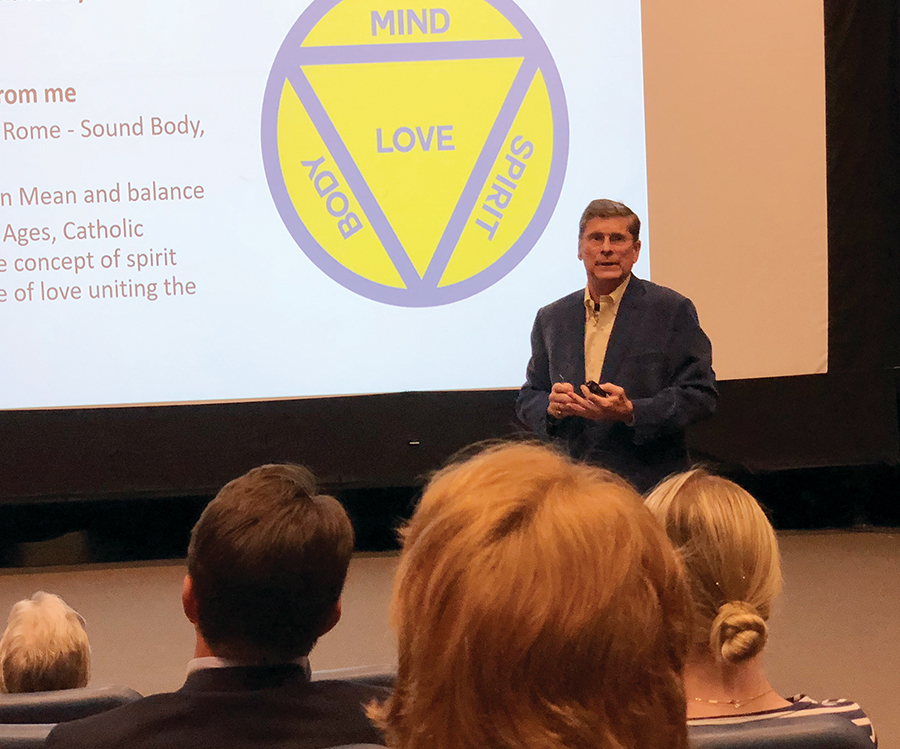 UCLA students selected Bill Simon, an adjunct professor in the Department of Economics, to deliver the school’s prestigious “My Last Lecture” on May 16.

“Professor Simon had more than 2,000 votes,” said the program’s emcee, who noted that students nominate and vote for professors online. “He won by a landslide.”

The emcee continued, “The most commonly used word to describe Professor Simon was caring.” Other adjectives used were “thoughtful, kind and genuine.”

“It’s always nice to win an election,” said Simon, 66, who was the Republican gubernatorial nominee in California in 2002, losing to incumbent Gray Davis in a surprisingly close race (47% to 42%).

The award debuted in 2010, when UCLA featured six lectures from notable figures across campus, such as philosophy professor Abraham Kaplan, chemistry professor Kenneth Trueblood and coach John Wooden, who expressed their own life philosophy, shared stories and imparted knowledge: in essence putting all life lessons into one “last lecture.” What would you tell your audience if this were your last lecture on this Earth?

“UCLA is a laboratory for life” was a way of explaining how he first came to UCLA and the role it played in his life.

Bill Simon and his wife Cindy moved to Pacific Palisades in 1990, when their oldest son, Willie, was three. The family was worried because he wasn’t speaking. After testing him at UCLA, doctors diagnosed Willie as autistic and warned the family he would never speak and probably be institutionalized by age 7.

“She was a tiger mom before there were tiger moms,” he said, noting that for the next 12 years, Willie went weekly to UCLA for treatment. “He now speaks plenty, is living on the east coast and working at Home Depot,” said Simon, who credited Cindy for helping her husband discover a life lesson: “No matter who well you think you know somebody, you will be surprised.”

Through one of Willie’s doctors at UCLA, Simon was asked to join the Ronald Reagan Medical Center board. He missed a meeting only to learn he had been elected board vice chair, which led to another life lesson: “Try not to miss meetings.”

Through those contacts, Simon was asked to co-teach his first class at UCLA in 2010, which prompted another life lesson: “One thing can lead to another.”

“I have been blessed with two great life partners,” Simon said, noting that his brother Peter, with whom he is still business partners, was working at a desk next to Cindy at a New York trading firm.

Even though Simon had often spoken to Cindy when calling his brother, it was Peter who told him Cindy had just ended a relationship and that Simon should ask her out. Taking his brother’s advice, he did, which led to another life lesson: “There are great things in front of you.”

Simon told the audience about Cindy. “She has been a great mom to our children Willie, Lulu and Griffy and a stepmom to Cary.” He bragged about Cindy and Dollies Making a Difference and how that organization has shipped out more than 30,000 dolls. He showed a slide of the YMCA’s Simon Meadow in Temescal Canyon. “You see this?” he asked the audience. “This is all Cindy’s doing. She is active in the Y.”

Simon, a partner at Massey Quick Simon, a wealth-management firm with $3.7 billion in assets, explained how the miracle of compound investing is also true of partners.

Even if it’s a modest return,“someday if you are patient, you will have a lot of money because that four percent earns not only on your principal, but on the four percent you earned the prior year.” Simon pointed to Cindy and his brother as examples of compounding because “they just keep getting better.”

“Physical education is just as important as academics,” Simon said. He explained that when he attended Williams College and played for the tennis team, his grades were higher: physical activity helped with academics.

That led him to start the UCLA Health “Sound Body Sound Mind” foundation, which has helped fund new fitness centers in more than 100 high schools, including Palisades High in 1998. Simon’s takeaway life lesson: “You never know when an opportunity will arise!”

Regarding the mind, he quoted famous investor Charles Munger: “In my whole life, I have known no wise people who didn’t read all the time—none, zero.” That prompted Simon’s next life lesson: “Learning continues after graduation.”

“Spirituality is the acknowledgement of something greater than ourselves,” said Simon, who is the author of two books on the Catholic Church. “Love holds the eternal triangle together.”

His prefect day: “Break a sweat, say a prayer and read a book.”

“Your ego is not your amigo.”

Simon warned that his ego “has gotten me into trouble” and recalled how he had invested in a telephone booth company (Pacific Coin) in 1998. His wife had asked, “How about cell phones?” But he assured her this was a good investment.

That failure led the 1982 graduate of Boston College Law School to list his ego’s greatest hits, including “I may not be much but it’s all I think about.”

Simon noted that self-knowledge combined with humility is the flip side of the ego coin.

“You can’t buy milk at the hardware store.”

This fifth nugget translates into common sense. “We shouldn’t underestimate the importance of emotional IQ and common sense,” Simon said. “You really can’t change human nature just like you can’t buy milk at the hardware store.”

He warned that the four most expensive words in the English language are “This time is different.” If you hear that phrase being used to describe investments, rela- tionships, etc., “Run the other way!”

The professor quoted Mark Twain: “History doesn’t repeat itself, but it often rhymes.” “Socrates was not a wise guy—he was a wise man.”

Simon said that growing up in New Jersey, the home of “wise guys,” you didn’t want to ask too many questions, but “Socrates, who was not afraid to ask questions, was a wise man. He recognized we all don’t know that much, we really don’t.”

“All I know is that I know nothing,” Socrates said.

Simon’s takeaway life lesson: “We should proceed carefully and ask a lot of questions, even if we are in New Jersey.”

Simon told students that some senior executives are too busy to read memos. He quoted his father, William E. Simon, who served as Treasury Secretary (1974-77), and said, “Don’t tell me how a watch is made.”

Simon advised his audience that in presenting, be yourself, be honest, be brief and do not be afraid to be self-deprecating. He concluded: “Be snappy” because “people will only remember a couple of things.”

Simon’s dad flunked out of two high schools and couldn’t get into a college. His eventual wife was warned not to date him. William finally got a job at a small Wall Street firm and never looked back. “He did it by taking risks and not fearing failure,” Simon said, and that prompted another life lesson: “Whatever hole you’re in, it’s usually shallow. And the first law of holes is to stop digging.”

His dad wrote each of his seven children a note, which Simon shared with the audience: “Life is wonderful! Live it, Love it, Laugh, Cry. Don’t ever fear taking risks and don’t fear failure. You come this way but once . . . This is not a dress rehearsal.”

Simon urged students to “come to your own conclusions and have backbone when others think otherwise,” and quoted John Kenneth Galbraith: “The conventional view serves to protect us from the painful job of thinking.”

“Pursue your passion, make it your calling.”

Simon said with teaching—his second career—he has found his calling, which is a higher, more profound activity than a passion.

“My happiest moments professionally are in the classrooms and in the conversations after class,” he said, noting that his passion for investing led to his calling [teaching].

He concluded: “Remember the spirit leg of the eternal triangle and that feeling of fulfillment—that is a spiritual thing, not physical or mental. I actually believe it’s God. Some might call it God’s grace.”