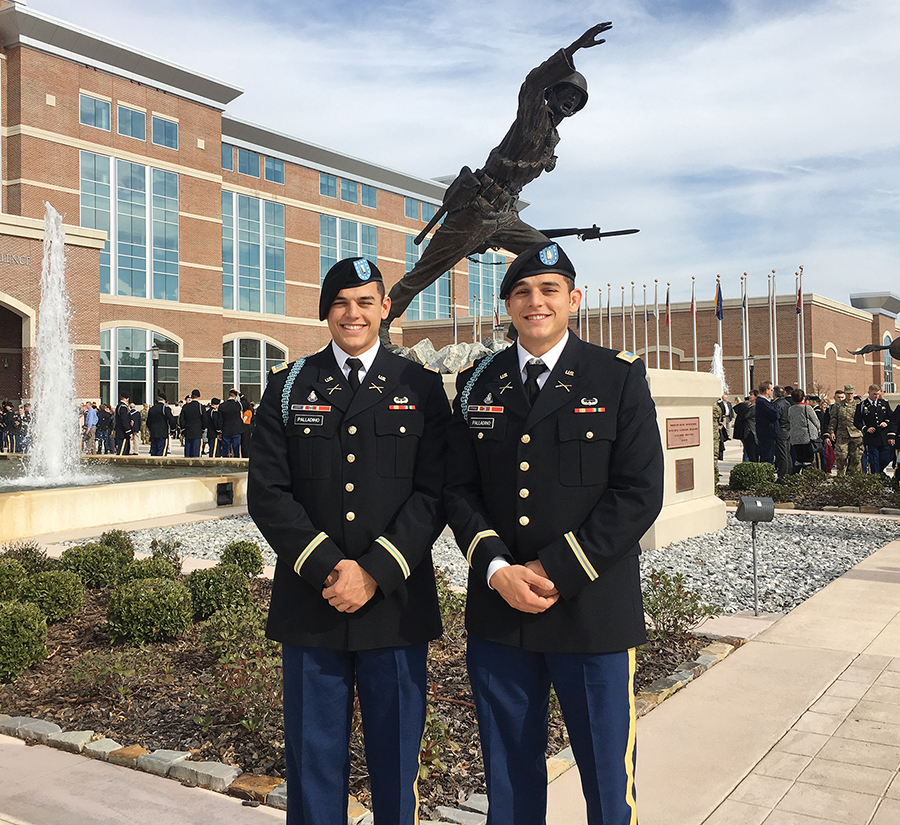 When twin brothers Jack and Liam Palladino graduated from West Point last year, they knew exactly what their next steps would be.

“Unlike other schools where you don’t know what you’ll be doing after college, for us, for the entire four years we knew exactly what we’d be doing,” Liam said. “You get more and more impatient toward the end. It’s nice to know we’re done with it, and we’re very excited to finally start the job.”

The first step in their new job actually involved further training. Both brothers will become infantry officers, so in July, the 2013 Palisades High School graduates began a four-month U.S. Army Infantry Basic Officer Leadership Course, which taught them basic tactics and techniques of the infantry. They then became infantry lieutenants, but their eventual goal is to become Army Rangers, which requires even more training.

In January, they started a 62-day course in the mountains of northwest Georgia and the swamps of the Florida Panhandle to become ranger-qualified. Afterwards, the brothers, who grew up in the Palisades, spent three weeks at airborne school, which included learning how to parachute and completing five parachute jumps.

Then, almost a year after graduating from West Point, they are slated to begin their first duty assignments as platoon leaders with the Second Brigade of the 10th Mountain Division of the 18th Airborne Corps, which is part of the U.S. global Quick Reaction Force.

This force includes “the first units to get sent into combat if there’s something going on,” Liam said. “They take on a deployment anywhere in the world based on the needs of the army.”

To be eligible to become rangers, the brothers need 11⁄2 to 2 years of service, and they are looking forward to being part of the infantry, which each brother selected as their branch preference their senior year.

“We both just always appreciated hands- on training and missions, and the infantry is very hands-on,” Liam said. “We also very much like physical fitness, which is a cornerstone of the infantry. It’s not the type of job you can get outside of the military.”

While Liam had remained clear on his preference for the infantry throughout college, Jack considered military intelligence his first choice during both his sophomore and junior years, but ultimately selected infantry as a senior.

“I realized it was a better fit for me with it’s physicality and specific mission set,” Jack said. “I changed my mind before I put in my final branch preferences, . . . and I couldn’t  be happier about it.”

Physical fitness was a priority for them both in school, and they each applied to major in kinesiology, which is a small competitive major at West Point that focuses on human movement and physiology particularly as it relates to exercise.

As a result, they learned about diet, stretching, fitness and biomechanics in depth and plan to use these lessons as platoon leaders, where they will be in charge of about 40 soldiers.

“That’s something that appealed to us about the major,” Liam said. “It had real world applicability on a daily basis.” At West Point, “we were able to help a lot of our fellow classmates. It’s knowledge we can impart on our soldiers to improve the physical fitness of our units.”

While at West Point, athletic endeavors were also a priority for both brothers, whose parents are Jacquelyn Overcash, who owns an electric company in North Carolina, and Jim Palladino, who owns the Santa Monica bath and body company Get Fresh. Their older brother Dylan is an actor. At PaliHi, the twins had run track, but in college they spent two years doing power lifting and also competed in a variety of sports with their companies.

A favorite was combatives, which Jack described as ground fighting somewhat similar to Brazilian jiu-jitsu. He noted that combatives doesn’t use punches or kicks, but instead relies on pressure holds and chokes.

He said, “I liked combatives the most, because it was most applicable to Army training.”

Another aspect of his training at West Point that he felt was particularly beneficial involved learning about leaders and how they influence others in both positive and negative ways. Jack said he saw the effect of both good and bad leadership and saw how “good leaders made lasting connections and made people want to thrive once that leader left.”

In addition, he discovered that “the best leaders are humble, and they realize everyone they meet knows something they don’t and that they can learn from them. When you feel like you have it all figured out, then that’s a downfall of a leader. When you realize you can learn from others, you can grow from that and then as a unit.”

Both are looking forward to visiting troubled areas of the world to help address challenging problems.

Liam said,“There’s a certain allure to being ‘the tip of the spear.’ We know there is conflict in the world even though we prefer that there not be. Someone is going to be sent to those conflicts, so it might as well be us. We’d like to be the ones doing the job.”