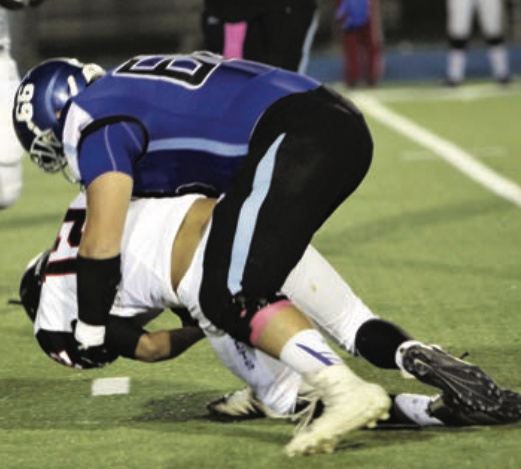 Since coming to Pali five years ago, Hyde has turned the program around and winning has become the new normal. This year’s team reached the quarterfinals in the City Section Division 1, but lost to Dorsey, 42-28.

When All-Western League awards were handed out, senior Ari Sallus, who has committed to UC Davis, was named Offensive Linesman of the Year, and senior Campbell Geddes was named Kicker of the Year.

On December 19, Dick Dornan, the L.A. City sports information director, released the 2017 Football All-City teams. In Division I, junior Trevor Gill of San Fernando was named Player of the Year and Ari Sallus was named Offensive Lineman of the Year.

Running back Hamilton made the first team with 237 carries for 1,455 yards and 12 touchdowns. Geddes was also selected for making 47 out of 50 PATs and 9 out of 12 field goal attempts (the longest being 46 yards).

Making the All-City second team were safety Janney (25 solo and 43 assisted tackles) and linebacker Palees, a two-way player. He was credited with 21 solo and 27 assisted tackles, while also scoring 14 touchdowns.