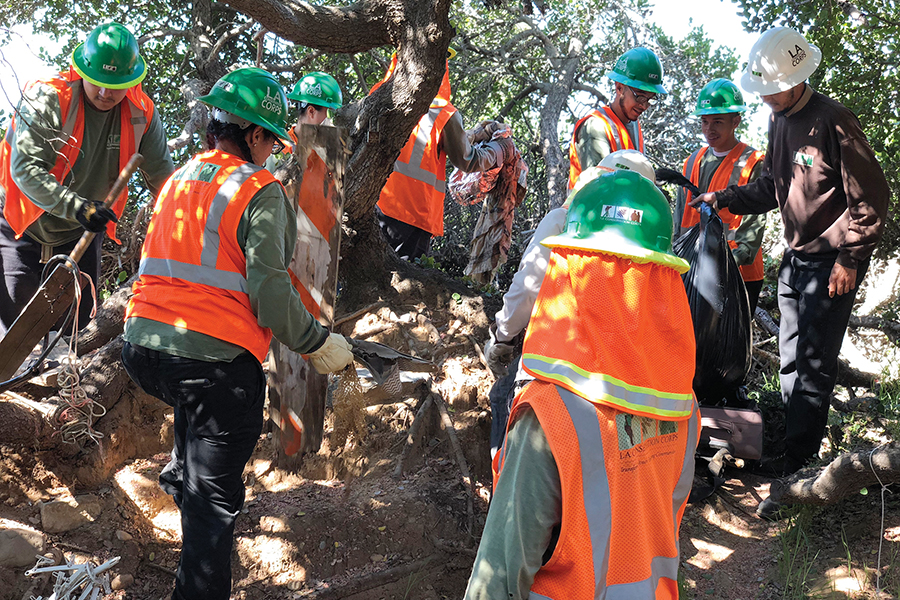 The view from L.A. city-owned property below Via las Olas down to Pacific Coast Highway is indeed spectacular. But that’s not why about 40 people assembled on the hillside on April 17-18; they were there to clean out abandoned homeless encampments.

The area below the Las Olas bluffs once served as an illegal campground for numerous homeless people. But after two brush fires broke out at encampments (one below Via las Olas, the other below Corona del Mar) and raced up the hillside toward Pacific Palisades homes, warning signs were posted in 2015: “Restricted Entry, Very High Fire Severity Zone.”

Those signs made it possible for Los Angeles Police Department officers to tell the homeless they could not stay.

“With the signs, I could ask them to move on,” Officer John Redican told the News. “I would then ask them if they had help or if they wanted it.” He could connect the person with the two social workers hired by the Pacific Palisades Task Force on Homelessness. As people were cleared from the area, about 30 abandoned campsites remained—with tons of accumulated garbage.

Money had been raised to clear these remaining sites, but L.A. Recreation and Parks officials said the group needed to use a city-approved contractor to finish the task. After PPTFH members met with one contractor, he came back to the group and said he couldn’t find a crew. PPTFH members contacted Councilman Mike Bonin’s office for suggestions, and his field deputy, Lisa Cahill, said to try the L.A. Conservation Corps.

The Task Force’s Sharon Kilbride spoke to LACC Program Manager Lorena Umana, who agreed to bring 25 youth, between the ages of 16-19, to the Palisades.

Prior to their arrival, Kilbride had identified two large encampments for the youth to clean the first day.

Upon arriving at 9 a.m., they were given instructions: “Look for needles and glass. If you come across human feces and urine, put it aside, we don’t deal with that.”

The teenagers then split into two groups, armed with rakes, shovels and gloves, and started bagging the garbage that was fouling the environment.

The News asked one youth if he had cleaned up encampments before. “My first one was in Watts, this is my second one,” he said, noting that this was different because it had more trash in a smaller space.

NBC Channel 4 News came to document the process and the segment was shown on the 11 a.m. and 4, 5 and 6 p.m. news programs the same day.

Within an hour, the Corps had completed cleaning both abandoned campsites, much to the amazement of Kilbride, who thought it might take two days to do both sites.

She then had Redican show the youth additional campsites.

In about six hours over two days, the youth cleared all 16 targeted encampments. By contrast, local volunteers, many of whom were in their 50s and 60s, took an entire morning to clean one site.

“Us old folks are slower than these youths,” Kilbride wrote in an April 18 email to the News. “The good news is that Lorena [program coordinator] will be happy to have the Corps clean up the remaining camps along Palisades Drive and the Castellammare slide area.”

By May 10, 2018
in Uncategorized
Related Posts
Comments
Leave a ReplyCancel reply