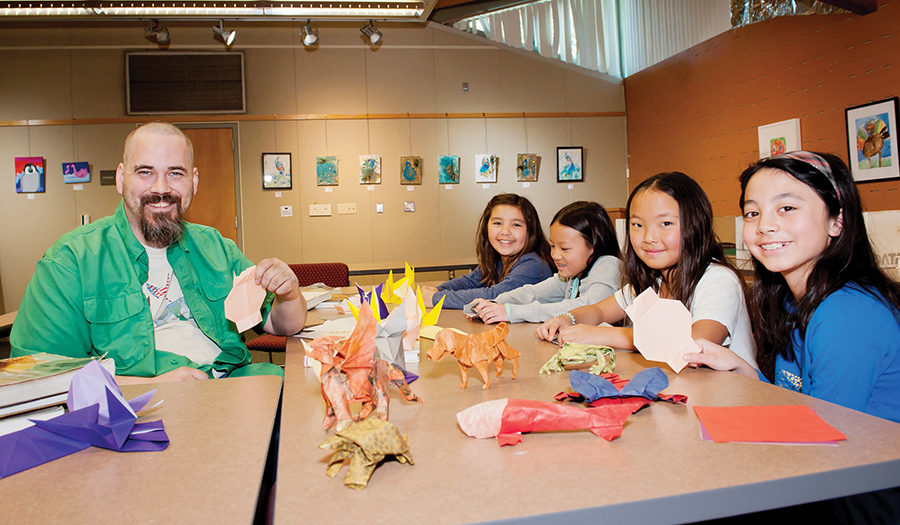 The art, which can be simple enough for a child to enjoy or complex enough to entrance scientists, also pervades cultures all over the world, according to expert Travis Taft.

“People think of it as a strictly Asian art, but it has a rich history across the world,” said Taft, 33, who grew up in Pacific Palisades. “Japan is definitely a critical part of paper-folding history, but there is more European influence than people realize.”

For the next six months, Taft will share his expertise at the Palisades Library in a free 1 p.m. Saturday class that adjusts based on the people who happen to attend. Attendees, including children and adults, can create pieces that might be fun home decorations, peruse origami books with a variety of ideas, or learn about the history of the art.

The drop-in class, which began meeting in January, has widely varying attendance, but in each group, Taft guides attendees through creating pieces that interest them.

He has a range of books to tempt and intrigue people who drop by the classes, and he treasures the chance to chat about the varied people who have delved into origami’s intricacies, including MIT professor Erik Demaine, Friedrich Froebel (the German who invented kindergarten), NASA scientist Robert Lang, who used the art in folding solar panels and lens, and varied artists, including Akira Yoshizawa, who incorporates water for wet folding, which allows curved pieces.

Taft, who also designs his own pieces including ones used in a Teenage Mutant Ninja Turtles movie scene that unfortunately was cut from the final film, also noted that the art form has a long history in meditation and Buddhism.

“Origami is my form of meditation,” he said. “When you figure out a hard step, the feeling of multiple folds going into place is a powerful, visceral feeling.”

The world of origami has intrigued Taft since he was a small boy, who could not yet read but whose family had a subscription to the children’s magazine Jack and Jill. One issue included instructions on making a jumping frog out of an index card. Taft became entranced by these frogs, which hop when their backs are pushed, and his busi- ness cards even feature instructions on how to transform the cards into jumping frogs.

Due to his intrigue with paper folding, his parents, Peter Taft and Diana Todd, bought him a book illustrating more origami pieces, and his knowledge expanded so that even though he didn’t know how to read English, he could soon read origami instructions.

“It is its own language,” said Taft, who grew up with his siblings, Julia and Tyler. “Even if origami artists don’t speak each other’s language, we speak that language.”

Origami has played another important role in Taft’s life in an unexpected way. After graduating from Wildwood School in 2004, he enrolled in St. John’s College. The following summer, while surfing at Will Rogers State Beach, he suffered a severe injury that permanently damaged the spinal cord in his neck.

“It was a one-in-a-million freak accident,” said Taft, who said a lifeguard his family knew was able to pull him to safety.

However, he now requires a wheelchair and the nerve damage affected his ability to use his hands. Paper folding turned out to be an ideal therapy, and Taft, who is now enrolled in graduate school to become a therapist, said origami is one of the many types of art therapy.

“Origami is especially good for that field,” Taft said, noting that for him,“ paper folding has been really good for getting that dexterity back.”

Origami needs minimal cleanup and is inexpensive, while it also provides very direct feedback, including a bump of endorphins when a fold is done well.