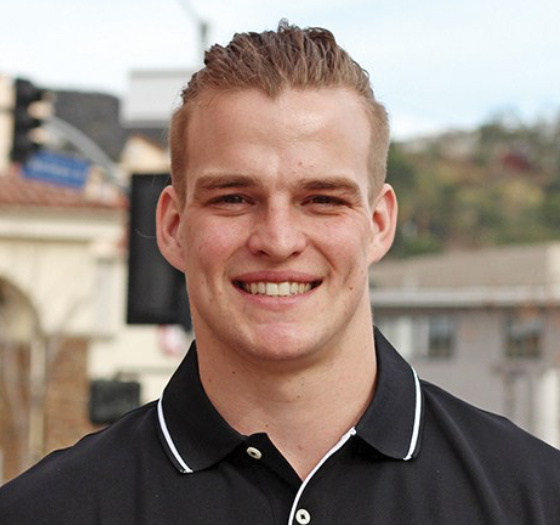 If you grew up in Pacific Palisades, chances are you played on one of the many local sports teams.

Palisadian Wade Clement certainly did and credits them with shaping him into who he is today. “Sports was probably the most influential in my life besides my parents,” he told the News.

Clement, 24, grew up playing PPBA baseball, AYSO and club soccer, as well as competing in gymnastics. He attended elementary school in Santa Monica and Harvard-Westlake for middle and high schools.

As a goalie for Harvard-Westlake’s soccer team, he was told by one of his coaches he should play at the collegiate level. Clement took his advice and ended up at Duke University, where he played Division-I soccer while also majoring in cultural anthropology.

“[Sports] teams have been the most important part of my life,” said Clement, who noted that his closest friends and mentors came from playing on teams.

After graduating in 2016, Clement spent six months traveling through Southeast Asia, Australia and New Zealand. When he returned, he started looking for a job.

“I knew I wanted to work in sports and community outreach,” he said, so he began searching prospective companies, one of which was Prime Time Games. “I went in for 10 minutes to get some information and it turned into a job interview.”

Prime Time Games is a nonprofit started in 2012 by Santa Monica resident Peter Straus. The program aims “to provide intervention programs for at-risk children from low-income areas of Los Angeles that combine academics, athletics and leadership training,” according to its mission statement.

Clement serves as program manager for the high school league, which pairs mostly low income students (coaches) with their developmentally challenged classmates (athletes). Many of the peer coaches come from the varsity teams at their respective schools.

The coaches and athletes meet after school and play together as part of a larger team. “After school is the most volatile time of the day,” Clement said. “This program takes them [the students] out of that sit- uation.”

His job is to establish new programs, order equipment and create and implement training, among other things. “It’s a lot of work, but it’s so important,” he said.

Prime Time Games staggers sports seasons so they don’t conflict with the varsity players’ schedules. “When they teach their own sport, it shifts their perspective,” Clement said, noting that 70 percent of the students (coaches) stay for four seasons. “They say, ‘I don’t want to let my athletes down.’”

The rules of each sport have been modified so that the coach and athlete can play at the same time. “We changed the rules so each of the pairs plays a position,” Clement explained. “When watching games, you can really see the students working together as pairs.”

Each program can support up to 32 students, who comprise one or two coed teams. They spend five weeks practicing soccer, basketball or football once a week and playing one game a week against another Prime Time Games team. The season culminates in a championship game.

“Thirty-two kids per team is so that we make sure everyone has an opportunity to participate,” Clement said. “[However,] at the end of the day, money is a factor.”

When Prime Time Games first starts at a school, the cost is $7,500 to cover uni- forms, equipment, transportation and the salary of the head coach. After the first season it’s $5,000 per school.

“[It costs] between $150 to $200 per kid to give them an opportunity to represent their school in sports at no cost to their high school,” Clement said.

Prime Time Games is currently at seven Title I schools in Los Angeles County, including Venice, University, Fairfax, Hamilton, Los Angeles, Culver City and Dorsey High Schools. (A Title I school is classified by the government as having at least one half of its students on free or reduced lunch plans.) This semester the program is expanding to include 15 additional schools, including San Fernando, Atleta and Compton High Schools.

The students are very proud to be part of the program. “They wear their Prime Time jerseys off campus,” Clement said. Fierce rivalries between schools are mollified by the students’ mutual association with Prime Time.

Eighty-five percent of Team Prime Time students go on to secondary school, which is well above the national average of 77.5 percent for low-income students (according to the U.S. Department of Education).

“We put kids in positions of leadership because they are coaching kids with special needs,” Clement said. “The students find purpose in school, so their grades improve.”

Clement lives with his parents Jude, who works for UBS Financial Services, and Dan, the founder of College Bound Today, a nonprofit that helps low income students get to college. His younger brother, Sam, writes and produces music.