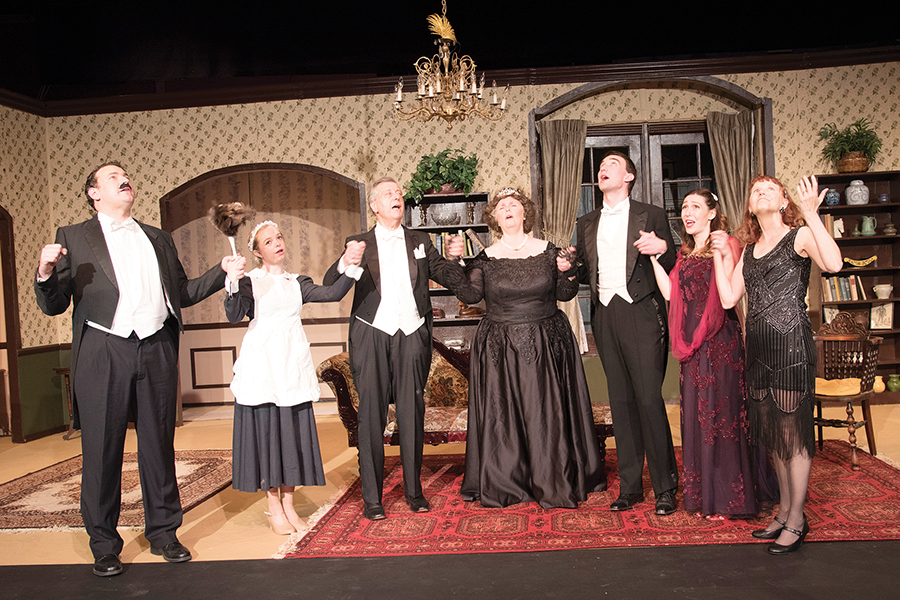 “Play On!,” Rick Abbot’s 1980 comedy about a community theater group, opened on April 6 at Theatre Palisades.

This entertaining play within a play is every actor’s and director’s nightmare. Set to open in four days, the group’s production hasn’t had a complete run-through because the author of “A Murder Most Foul” continues to rewrite the script.

At the time the community theater agreed to produce the play by amateur Phyllis Montague (played by Cindy Pearl), it seemed like a good idea, because they didn’t need to pay her for it.

But actors struggle to learn and remember their most current lines. With the line changes, entrances and exits take place at the wrong time and in the wrong direction. Henry (Michael Bernstein), the lord of the manor, tries to go to his quarters, but is stopped as he is reminded he is exiting to the maid’s quarters.

Actors also discover major flaws in the play, such as the fact that it’s a murder mys- tery, but doesn’t have a murder.

There is infighting among Saul Watson (Richard Conolly) and the woman who now appears to have the majority of the lines, Polly Benish (Marina Tidwell), because she’s friends with the playwright. Her weight is the center of many jokes, and Conolly and Tidwell spar well.

An onstage romance between characters Violet Imbry (Lauren Chapman) and Billy Carewe (Robert Watson) turns into a hilarious off-stage romance as they forget their characters’ names and shout out each other’s real names during a passionate scene. Aggie Manville (Ria Parody Erlich), who works as a prompter and a stage manager, takes everything in stride as she continually tries to smooth over the rough spots.

Act II is the disastrous dress rehearsal, as the pivotal jewel in the play changes from the “Delhi Diamond” to the “Ranchipur Ruby” to the “Darjeeling Diamond”—to the point that actors are having trouble remembering what to call the gem.

During dress rehearsal, Louise (Sue Hardie), who is in charge of construction and sound effects, has to redo the tape after it is accidentally erased by the author. Trying to bring this whole hilarious mess to the finish line is director Gerry (Catherine “Cat” Rahm).

Act III is opening night and the comedy continues to elicit laughs from the audience as Smitty, the maid (Bella Dixon), a high school student, lets anxiety take over and she speaks her lines so fast, no one can understand them.

The theme music for “A Murder Most Foul” was composed by Alan Goldman and Susan Stangl.

The show runs through Sunday, May 13. Performances are Fridays and Saturdays at 8 p.m. and on Sunday at 2 p.m. at the Pierson Playhouse, 941 Temescal Canyon Rd. Tickets are $20 for adults and $18 for seniors and students. There is free parking.