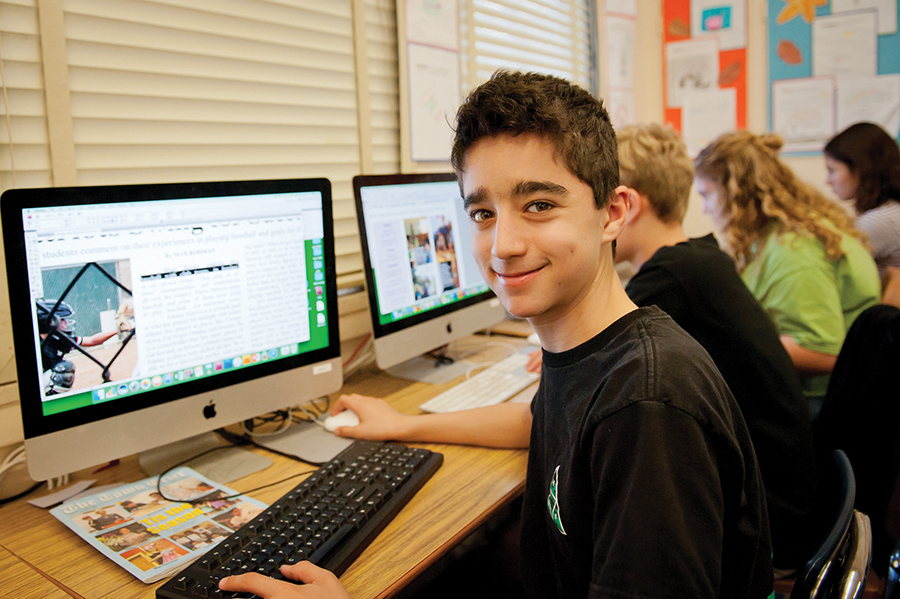 This paper, The Town Crier, has once again received national attention as well, by winning its second Pacemaker Award from the National Scholastic Press Association (NSPA), which honors excellence in student journalism every November.

The Crier was one of 275 high school and middle school newspapers submitted to the contest from around the country.

Revere faculty adviser Eric Wechsler told the News in an email, “Four middle schools were among the 49 schools that made it into the final round. When the winners were announced at the NSPA’s fall convention in Dallas, only one middle school— Paul Revere—was among the 26 schools that took home the top award.”

Media professionals choose the winning student newspapers based on their excellence in coverage, writing, editing, design and photography.

The busy Revere student-journalists, however, didn’t have much time to celebrate. It was time to get back to work on the December issue, but with school closed December 7 and 8 because of wildfires, the paper’s deadline was pushed back and students were scrambling to make it to press in time to distribute the paper in early January.

“The fire gave us an opportunity to go outside our borders,” said Wechsler, who heads up the newspaper and yearbook and is an eighth-grade English teacher. He likes to show his students daily newspapers such as the Los Angeles Times and New York Times as examples of journalism to strive for.

The students generally write about subjects related to the campus, or young people’s lives. They use printed questionnaires which they send to faculty members or others they are interviewing in order to make sure they are accurate in quoting them.

In addition to their daily journalism class, there are some after-school and lunch-period time commitments required of each student, in order to cover campus events.

Although many of the students say they signed up for the newspaper elective because they love writing, they have learned there is much more to putting together a newspaper. They also take photographs, gather information and create layouts using Adobe InDesign.

Articles in the works for the coming issue include Davina Yashar’s on the community service club activities, and Johnny Harvey’s round-up of how different students celebrate winter holidays. Annabelle Grandy was editing her piece about the school’s lost tortoise, and how he was found. Bianca Cherry was writing a page on “overpriced clothing brands such as Supreme.” Ginger Simpson was finishing up a page about four faculty members who attended college in other countries.

“It teaches us leadership skills,” said Chae, who notes that each editor has to lead 8 to 10 people.