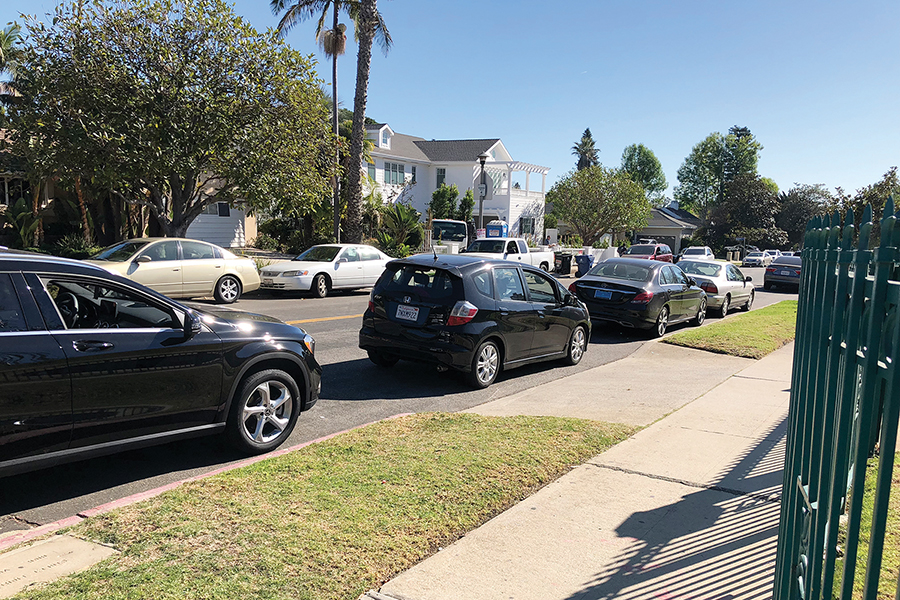 “Everything we’ve been doing is going nowhere,” Andrew Sacks, a resident of the neighborhood adjacent to Paul Revere Middle School, said in a phone call to the News on February 7. “Students are being hurt and there are no repercussions, no tickets for illegal parking.”

Sacks recounted how the day before, a Revere parent parked in the driveway of a neighbor who lives a block from the school, which is located on Allenford Avenue (between Sunset and San Vicente).

The neighbor, unable to exit her driveway, came out and asked the parent to move. The parent refused and when the neighbor attempted to take a photo with her phone, the parent grabbed the phone and threw it. A police report was filed.

Sacks, a first alternate on the Pacific Palisades Community Council, invited the News to come and observe school dismissal to see the large number of people who park not only in front of fire hydrants and residential driveways, but also in posted “No Parking” spots along Allenford.

On February 8 and 9, the News counted more than 30 cars parked illegally, both days. Even more disconcerting, some students were almost hit as they used the crosswalk or made dashes to get to illegally parked cars. Neighbors say that one student has already been hit this year and taken to the hospital. Close to 2,000 students exit on or near Allenford, the only street that provides access to the front of the school (Sunset provides access on the north side of the campus at Mandeville Canyon).

On February 8, a male student was almost hit by a car. The driver, who did not initially see him, swerved at the last minute to avoid him and narrowly missed hitting a second car that was parking illegally.

The next day was equally harrowing. The light turned green for the students to cross. As three stepped onto Allenford, focused on the walk signal, a car ran a red light, almost hitting them.

The News spoke to a babysitter who frequently picks up kids at the corner of Allenford and Brinkley. “I park down a few blocks and walk up,” said the person, who did not wish to be identified. “There are lots of spaces and if the kids have to walk, it’s okay. I’ve never seen police ticketing.”

Another babysitter, who also wished to remain anonymous, said that she saw the parking enforcement car that gives out tickets, but that the officer didn’t ticket anyone.

We contacted longtime resident Andrew Wolfberg, who is second alternate on PPCC. He responded in a February 7 email:

“There is no justification for the parent to physically assault a neighbor for taking a picture of the parent’s license plate. Also, another neighbor reported having problems with someone in the same (similar) car very recently.

“Many neighbors are not bothered because they are not home when the blocking takes place, but I completely understand the frustration of neighbors who can’t pull into or out of their driveway because some person decides to block the neighbor’s driveway for ‘just a few minutes,’” Wolfberg wrote. “There are some parents who are actually parking IN our driveways.

“We had a neighbor ask someone to move their car and the parent got threatening and told the neighbor not to complain because the parent now knows where the neighbor lives!” Wolfberg said, noting that while the traffic problem may only exist for an hour or so each school day, it is a problem that affects everyone in the community.

“School traffic makes it difficult for emergency vehicles to respond to emergencies in Mandeville and the Palisades Riviera and for ambulances to transport patients to Saint John’s or Santa Monica UCLA,” said Wolfberg, who noted that LAUSD takes no responsibility and is immune from a Conditional Use Permit.

He praised Revere’s principal. “We are very fortunate to have a dedicated professional like Tom Iannucci, but his hands are tied and there is little that he can do to punish parents who are doing bad things.” Could more traffic enforcement be sent to Revere?

“It is my understanding that LADOT does not typically issue citations if the driver of the car is still in the vehicle that is illegally parked,” Wolfberg said.“The DOT officer typically asks the person to move their car and the person moves. Also, LADOT does not issue tickets for blocking a driveway unless the owner of the home asks for the person to be issued a ticket.”

According to Councilman Mike Bonin’s spokesperson David Graham-Caso, who responded in a February 13 email, “We have been in contact with the school’s principal, and we have alerted LAPD’s West Traffic Division (officers have been dispatched to patrol and issue citations to people parking illegally). This enforcement has already proven helpful, and we will continue to do what we can to ensure it is a priority.”

Graham-Caso was asked how kids’ safety could be made a priority.

“We are working with the Department of Transportation to have the crosswalk at the south/east side of the Brinkley and Allenford intersection removed,” he said, noting that the plans have been drawn and approved and the project is funded. “We have asked LADOT to schedule a crew to complete the work as soon as possible” but “LADOT has a long backlog of important safety projects to complete, and this work will done as soon as a crew is available.”

By return email, the News asked when the date might be, but no answer was given by press time.

Generally, middle schools are not staffed with crossing guards. “Back in 2014, Councilmember Bonin fought for funding for the LADOT crossing guard program, which after being decimated by cuts in previous budget cycles, had only about 330 guards for the entire city,” Graham-Caso wrote. He added that LADOT has started hiring guards again and the number is at 470 guards.

The News asked, “What would it take to get a crossing guard at Allenford?”

“The process to request a guard involves LAUSD submitting a request to LADOT for a guard to be placed near a school, and I am glad you have copied Allison Holdorff from School Board Member [Nick] Melvoin’s office on your email, as they play a central role in the answer to your question,” Graham-Caso wrote.

And as the News watched cars double park next to illegally parked cars and kids trying to cross the busy street, Andrew Sacks said: “This is a public safety issue that no one wants to care about. It’s just dumb luck that no one has been killed.”