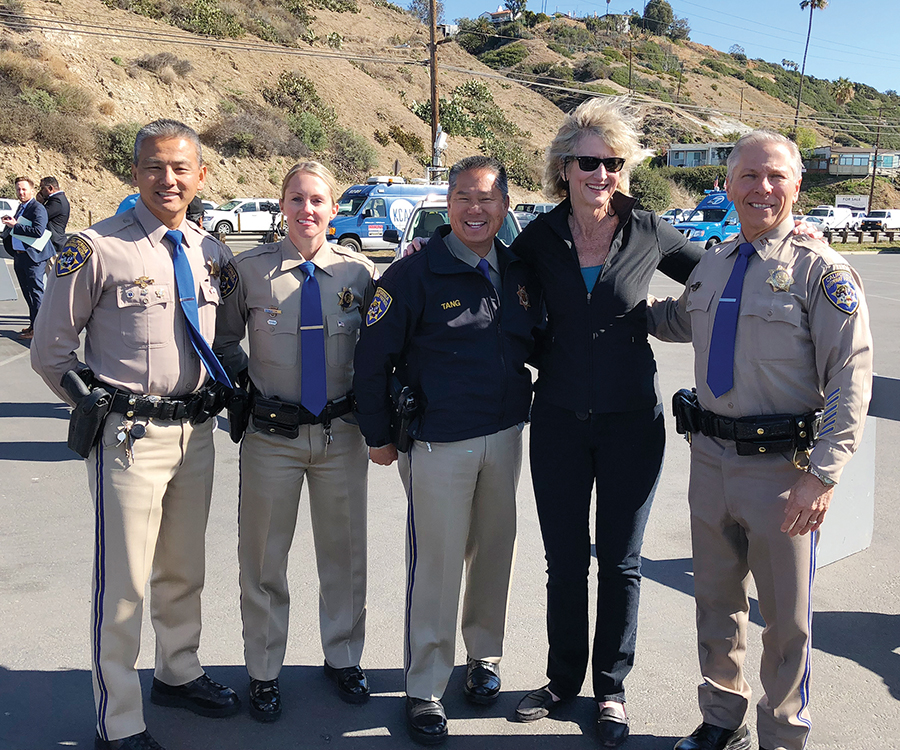 There were 617 traffic collisions last year along PCH from the McClure Tunnel in Santa Monica to the Ventura County line, law enforcement agencies reported.

Armed with a $150,000 grant from a federal-funded state agency, a coalition known as the PCH Taskforce is working to reduce those numbers, via a multi-pronged initiative involving education, enforcement, engineering and outreach.

“Everybody says, ‘Oh my gosh, what a terrible accident,’ but it’s predictable and it’s preventable . . . if everyone just gets on the same page about being aware of how vulnerable we are, whether we’re in a car or on a bicycle or walking,” said Pat Hines, a former Palisadian and veteran traffic safety advocate hired by the Taskforce as a consultant for the initiative.

In February, lawmakers and enforcers— including Assemblymember Richard Bloom and Malibu Mayor Rick Mullen—gathered at the Will Rogers State Beach to announce the program, made possible by the grant from California Office of Traffic Safety, through the National Highway Traffic Safety Administration.

“For too long, Pacific Coast Highway has been not just a picturesque California landmark, but also a dangerous road with a harrowing record of fatal traffic collisions,” Taskforce co-chair Bloom said in a statement.

Through wide-ranging methods, including distributing a bilingual brochure, broadcasting a public service announcement, taking surveys, and hosting workshops and games at local events, Hines hope to bring awareness to what she believes are common sense precautions.

“Everybody knows the safe thing to do,” said Hines, who in 1983 founded Safe Moves, a street safety nonprofit aimed at educating children.

The problem Hines explained, is that people believe the risks outweigh the consequences—that the five seconds spent scanning their phone is worth five seconds of vulnerability.

What people don’t realize is that when you’re going 40 miles an hour, you travel the length of a football field in five seconds, she said. It’s unintuitive factoids like that which Hines is integrating into presentations at farmer’s markets around the city to deter people from making inaccurate cost-benefit analyses as they cruise down the highway that has little shoulder room, plenty of distractions and significant pedestrian activity. The PSA, which Hines will be broadcasting on local TV and radio stations, is intended to turn the collision data into an emotional statement.

The data represents someone’s mother, father, son or daughter, she pointed out.

Or, in Hines’ case, a best friend.

While training together for the 1984 Olympic trials in bike riding, her friend Sue Latham was struck and killed by a hit-and-run driver on PCH.

Following the tragedy, Hines spent significant time and energy trying to find the driver, believing “it would solve my own personal responsibility,” she said.

Besides drumming up interest through media and interviews, Hines put up a billboard at Gladstone’s offering a reward for information leading to the arrest of the driver.

With her encouragement, the California Highway Patrol put up a roadblock in front of the restaurant for six Sundays in a row at the time her friend was killed, stopping cars to monitor them for damage and question drivers.

Hines never found the driver, but she found a new life purpose, founding Safe Moves shortly after the accident.

“Putting somebody behind bars wasn’t going to solve the problem for everybody else,” Hines said she eventually realized. “[Education] is a great way to bring meaning to her death. Not only through my foundation, but to be a part of this safety effort along PCH.”

Hines, who had lived above the Self-Realization Center on Sunset for 20 years, left the Palisades shortly after Sue’s death.

The same nerves prompted the lifelong triathlete to soon give up on bike riding. After completing a 2,000-mile ultramarathon bike race from Manhattan Beach to Atlantic City in August 1984, she hung up her wheels for good.

The seas, however, remain a safe haven.

In June 2016, Hines co-rowed 2,400 miles across the Pacific Ocean, from Monterrey to Hawaii, to raise awareness for women’s heart health.

“The funny thing is, I felt safer out in the ocean, in a tiny rowboat with 30-foot seas, than I do walking the streets of Los Angeles,” she said.

(Editor’s note: Hines will be at the Palisades Farmers Market on April 29 to draw awareness to PCH safety.)