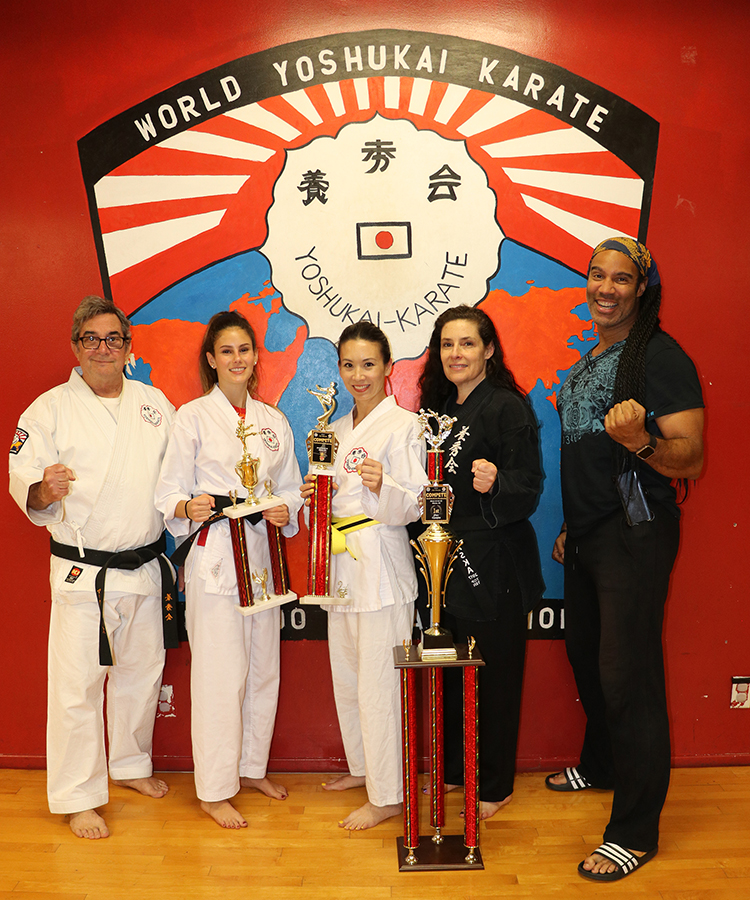 Michelle Villemaire, who is known in Pacific Palisades for her colorful yarn-bombing tributes to notable women, competed in her first karate tournament on Feb. 24, in Ontario, and won.

Villemaire, whose daughters, Pearl, 10, and Vivi, 7, take karate at Gerry Blanck’s dojo in the 881 Alma Real building, started kick-boxing classes there about a year ago. Sensei Marc Lamaze, a third-degree black belt, noticed her potential for karate and suggested that she start learning the sport.

The self-described “Air Force brat,” who was born in Massachusetts but spent much of her childhood in Saudi Arabia, joined the dojo and Lamaze called her “a natural.”

She averaged about four hours a week at the martial arts center, taking TJ Storm’s kickboxing class on Mondays and Wednesdays, and immediately followed with karate with Sensei Marc.

“Leading up to the competition, I trained more often with Tamar,” Villemaire said. “I’m also incredibly lucky to have had TJ Storm (a huge martial arts star) critique my moves.”

“My kids might even tell you they caught me practicing in the aisles of Gelson’s or the Promenade,” Villemaire said. “I took advantage of open spaces whenever I could.” When it came time for the competition, Springer loaned Villemaire her competition gi (uniform), and she and Lamaze drove  her to Ontario.

“I have been moved to tears on several occasions when thinking about their loving support,” Villemaire said. “When Tamar says, ‘You’re worth it’ and Marc says, ‘I want to help you because you’re a good person,’ I swear you have to mop me off the floor. I keep wondering if Tom Hanks is going to come out and say, ‘There’s no crying in karate!’”

The most amazing part of this story, Springer pointed out, is that Villemaire added the second event while at the tournament. “She had only planned on doing one event, but we had nearly a three-hour wait,” Springer said. “So I said to her, ‘Let’s go buy a bo staff, and I will teach you the first bo kata.”

Springer said that Villemaire learned it in an hour and then competed.

“It was hard to learn the weapons kata in an hour, but just at the beginning,” Villemaire said. “When something is completely unknown it’s daunting. But the lesson of repetition and patience became abundantly clear as my confidence grew each time I did the kata.

“It also helped that I had just seen Black Panther,” she said. The Bo staff is a long stick—like a broomstick—and the General uses them often in the film. “I channeled her! I came in second, but I beat a man two belts higher than me. The woman who took first place deserved to win with her impressive nunchucks. Guess which weapon I want to learn next?”

If you want to see Villemaire’s other talent, the Village Green will be yarn-bombed on March 21.

Villemaire, who has a popular family blog, has lived in the Palisades for eight years with husband Jonathan Abrahams, an Emmy Award-winning television writer and producer, and their two daughters. For more information, visit homemademimi.com/yarnbomb.