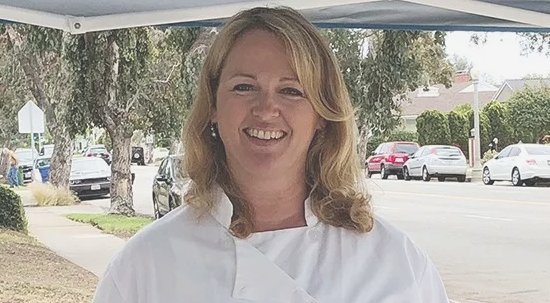 What to select from home baker Louise Sandy, who offers 22 different flavors for her custom cakes?

Hmmm, will it be a Funfetti (buttery vanilla cake speckled with multi-colored sprinkles, topped with vanilla buttercream and more sprinkles) or a White Chocolate Mocha (layers of espresso cake filled with white chocolate buttercream) or an Irish Car Bomb (Guinness chocolate cake, filled with Bailey’s buttercream frosting and coated with Jameson’s Irish whiskey ganache) or a Margarita (lime and Triple Sec cake, soaked in tequila and lime syrup, filled with homemade bitter orange curd and covered in lime buttercream)?

Once the flavor is selected, then the design process starts. “All of my cakes are unique designs created by me,” said Sandy.

If a customer provides her with a specific cake she will recreate it, giving credit to the original designer. She has designed everything from birthday cakes and Halloween cakes to wedding cakes.

“I think the most unusual cake I’ve made was a Beetlejuice cake for a Halloween party. I sculpted an almost life-size head, on top of two more tiers representing his checked shirt and the graveyard scene below, all lit up with green LED lights.”

A self-taught baker, Sandy is from the United Kingdom. “The first thing I ever baked was a Victoria Sandwich Cake, a traditional English vanilla sponge cake layered with jam and whipped cream,” she said, noting she was about 10 years old at the time. “My mother always made a cake for tea on Sundays, and she was very good about letting me loose in the kitchen,as long as I cleaned up afterwards.”

Sandy, who moved to the Palisades about two years ago, initially came to the West Coast with her husband, Julian, and two  children in 2004.

“He was working for an international advertising agency in London and they asked him to spend a month working over here to get to know the American market,” Sandy said. “His counterpart in the Newport office was to do the same in London. Since both families had small children, and the idea of the dads being away for a month didn’t go down too well, we decided to swap houses as well.”

The Sandy family liked it so well in California they didn’t want to leave.“ The American office offered my husband a permanent job and we jumped at the chance,” she said.

At the Fire Station 69 Open House on May 12, Sandy wowed everyone with free brownies and gingerbread cookies, frosted red and shaped like fire hydrants.

She was invited by Captain Bates, whose wife had ordered some cupcakes for him about a month ago.

“I hand-delivered, but had to park a couple of streets away,” Sandy said. “Just as I was walking up to the fire station, with the box of cupcakes in my hands, I tripped over a raised paving stone and went flying, cupcakes and all!

“Luckily it was mostly my pride that was hurt,soIdustedmyselfoff,calledandsaidI was going to have to go home and get more cupcakes (luckily, I always bake more than I need, just in case). By the time I got back to the fire station, Captain Bates had heard the story of what had happened, and we got chatting, and he suggested that I provide some cupcakes and brownies for their Service Day.”

Sandy, who runs the bakery from her home, benefited from the California Cottage Food Act, passed in 2013, that made it legal for home-based bakers to work out of their own kitchens.

“The Act was authored by L.A. Assemblyman Mike Gatto, in response to the L.A. health department closing down a ‘backyard’ bread baker who had been supplying delicious, but illegal, loaves to a group of local restaurants,” Sandy said. “With the sup- port of Cristina Oatfield at the Sustainable Economies Law Center in Sacramento, Gatto got the bill in front of the State Legislature.”

Sandy and her husband have two children: Jack, who just completed his freshman year at Arizona State University, and daughter Charlie (Charlotte), who will graduate from Palisades High School in June.