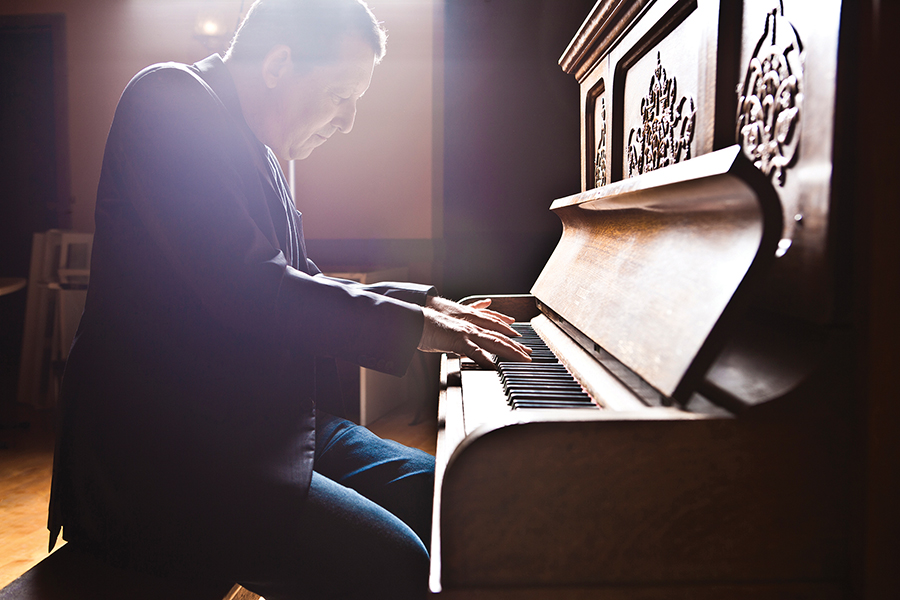 Lorber, who was born and raised in Philadelphia, is a multifaceted musician who plays both piano and guitar. “I’m basically an all-around musician who does various kinds of work that I can get,” he told the News.

At age 4, Lorber started his musical career with piano lessons. “I grew up in a musical family,” he said. “My mom played [the piano] . . . and I went to bed every night listening to her play Debussy or Rachmaninoff.”

During Lorber’s childhood, Bob Dylan rose to prominence, bringing folk music into the mainstream. Lorber, however, found jazz more to his taste.

“One of my cousins was into jazz, so while all my other cousins were playing ‘Blowing in the Wind,’ I’d be down in the basement with him playing the drums.”

Lorber continued to gravitate towards jazz, choosing to study it at Berklee College of Music in Boston.

“When I went to Berklee it was very jazz-oriented. Unlike a lot of music schools, they’re really a vocational school . . . The education I got there was great because it was perfectly designed for problem-solving.”

After spending a year at Berklee, Lorber moved to Portland, Oregon, where he founded the Jeff Lorber Fusion band. Their first album came out in 1977.

“The original band was a pretty tight unit,” Lorber said. “Kenny G was my sax player for five or six years. I helped him get his record deal.”

Today, Lorber works with different musicians on each of his albums. “Everybody’s kind of got their own schedules and projects and stuff,” he said, “so it becomes whoever I can get.”

In 1980 Lorber moved to Pacific Palisades and his career moved away from jazz. “During the late ‘80s to early ‘90s I was very, very involved in the recording studio scene here in L.A. I was part of a group that did a lot of dance remixes for a number of years.”

For almost 10 years Lorber focused on studio recording. “I didn’t pick up making my own records until about a decade after that.”

In 1993, he released his first album in seven years, “Worth Waiting For,” after finding he couldn’t stay away from jazz. “The jazz thing is just how I got started and then I went back to that,” Lorber said. “I wanted to be more in creative control and express myself.”

The album was praised by reviewers.

“Too many records front-load the best material in the first three or four tracks and drop in the filler in the middle to the end,” Jeff Winbush of All About Jazz wrote.“ Not here. There is not a moment on “Prototype” which seems phoned in.”

Lorber continues to play and tour with Jeff Lorber Fusion and with another band called Jazz Funk Soul. In March he’s heading to Jakarta to play at the Java Jazz Festival.

“The Java Jazz will be a special group featuring myself and Elan Trotman on sax, but after that we travel to China as Jeff Lorber Fusion,” he said.

Lorber and his wife, Mink, reside in the Highlands. They have two daughters, Nica and Jessica, who both attended Palisades Charter High School and graduated in 1993 and 1991, respectively.