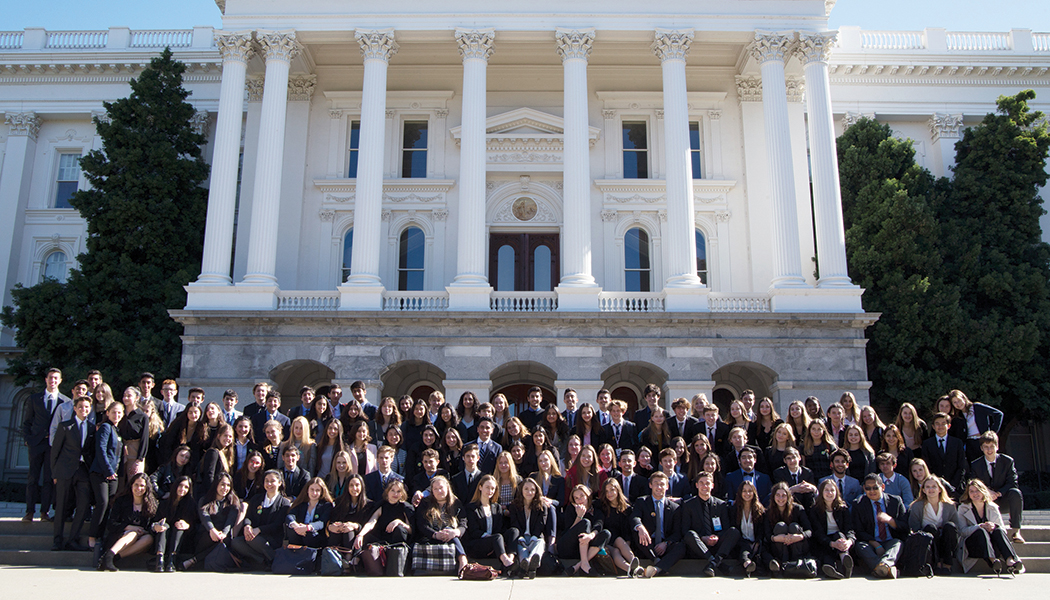 The 120-student delegation from the Palisades-Malibu Youth & Government program was selected from more than 90 delegations to receive the Delegation of Distinction recognition in Sacramento in February.

“We received the award because our delegates were recognized as community leaders and model student activists,” said advisor Ali Sheaffer. “We participated in community service events, helped out at conferences and hosted bonding activities with other delegations.”

The five-day statewide conference marked the culmination of a year-long program that promoted public speaking and youth civic engagement. Statewide, more than 3,500 delegates met weekly during the school year to learn about government.

Each year, the delegates select program areas to participate in, ranging from legislative (Senate and Assembly) to executive and judicial. Within each program area, delegates write bills and proposals, argue court cases, and create action plans for community outreach.

“I have made some of the best friends through this program and developed a confidence in my voice,” said junior delegate Coco Nakano.

At the state level, Palisades delegates were appointed and elected to a number of positions. Deven Radfar and Nakano were elected to serve as political party chairs (Avocado and Poppy Parties, respectively). Loren Jacobs served as chief of staff to a party chairperson and senior Alicia Abramson finished her term as a party chairperson.

Zachary Garai was a lead appellant in a First Amendment case about religious freedom. Other Pali delegates participated in cases when the appellant’s religious rights were violated when a niqab was forcibly removed, and her 4th Amendment rights were infringed upon when a DNA swab was conducted without her consent.

During bench trial (mock trial), 10 members of the Pali delegation argued a hazing and second-degree manslaughter trial that involved the death of a young woman during hazing games at a fraternity.

Caleb Crain and Katya Pronichenko were both appointed to serve as Under Secretaries of State, Maude Tipton served as chief of staff to the Youth Governor (who was from South Pasadena) and Eric Halperin served on the Youth Governor’s cabinet.

Palisades students were able to get four bills passed into law, including a measure advocated by Caitlin Rowles and Sydney Small, who argued that the luxury tax on tampons should be removed.

Extending the Fourth Amendment to cloud services was the idea of Eva Trevisan and Nicolette Khalifian, and adding a 25-cent tax to plastic straws was legislation from Shavan Safa and Max Katzman that also passed.

“Youth and Government has truly changed my life,” said junior Deven Radfar. “I have been given the opportunity to be a part of a program that promotes civic engagement among all students.”