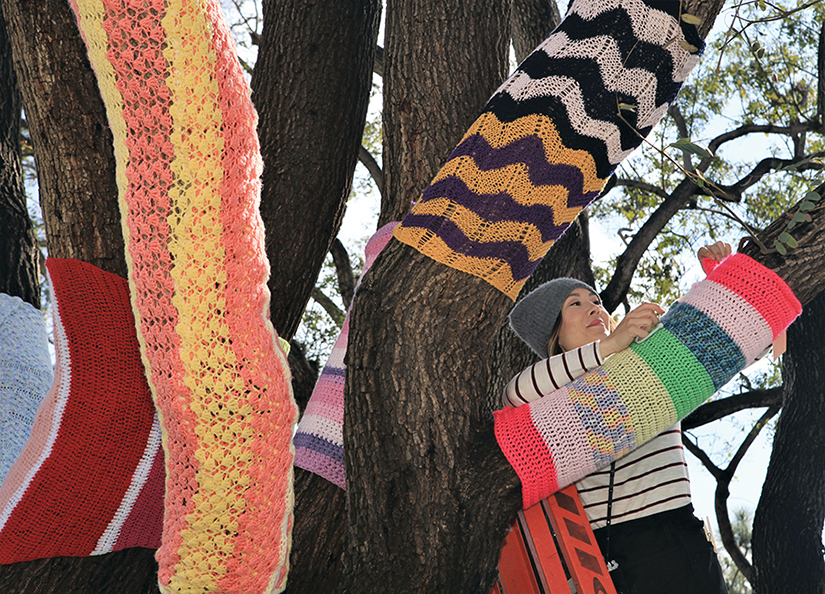 Michelle Villemaire has struck again. On March 23, she oversaw a group of volunteers as they draped colorful yarn around trees, benches, lampposts, two bicycles and even the dolphin figurine in the center fountain, who received a little pink knitted hat.

This was Villemaire’s fourth year of drawing attention to National Woman’s History Month, which had as its theme “Women of Color.”

Village Green board member Marge Gold, who helped with the installation, said the reaction of the community was so amazing to see.

“It brings people of all ages out and everyone is so delighted,” Gold said. “It feels to me that is what community is about and I am so pleased that the Village Green can be a part of it.”

The Village Green board realized that Villemaire needed liability insurance before she could start. Jim Kirtley, executive director of the Palisades-Malibu YMCA, stepped up and took the creative Palisadian under its insurance umbrella. He also climbed up into the trees to help with the installation.

Villemaire selected a particular tree or object and once the yarn was wrapped around it, she named it for a particular woman, putting that woman’s biography (typed and laminated) in a tag at the site.

This year she also fashioned the first names of famous women with a flexible cord and put it on different yarn sites. There was Anna (Anna May Wong—first Chinese-American movie star), Rosa (Rosa

“I want kids to walk through and see if their first name is here,” said Villemaire, a Pal- isadian since 2011.“They can connect with a famous woman through their shared names.”

On April 2, the installation was dismantled and the yarn pieces up-cycled “to make blankets for women and families who are transitioning out of homelessness,” said Villemaire, an “Air Force brat” who was born in Massachusetts but spent much of her childhood in Saudi Arabia.

Both an actress and writer, Villemaire has written for the Huffington Post and blogs on homemademimi.com with DIY (do it yourself) projects. She also has a YouTube channel.

“This [yard bombing] has become a great way to talk with my kids about inspirational women and women who have had an impact on us,” said Villemaire, whose husband is TV writer/producer Jonathan Abrahams. The couple has two daughters: Pearl, 8, and Vivi, 5.