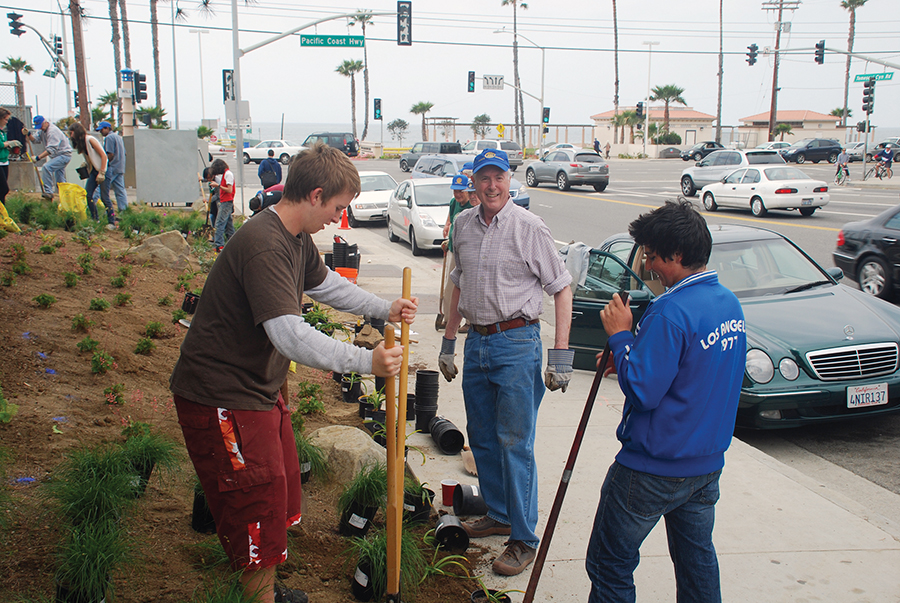 For 65 years, the Rotary Club of Pacific Palisades has been working to improve the local community and the world.

From efforts to plant trees in Los Leones and Temescal canyons to the worldwide endeavor to eradicate polio, the club’s men and women have taken on diverse service projects that not only helped others, but brought them closer together.

“Everything that I give I get back tenfold,” said John Wilson, whose late father, Bob, was a founding member of the club. “It is one of those types of clubs that you are constantly feeling a good feeling of accomplishment and like you’re contributing to the community.”

Perry Akins, a Rotarian for about 37 years, added, “Some of the members have become my best friends. Rotary attracts interesting people, good people, people who want to give back. For me it’s been very satisfying to meet such wonderful people in the Palisades.”

The local club, which is one of over 33,000 in more than 200 countries worldwide, started its service mission in February 1952 with 22 members. At the time, only men could join, although wives could contribute as affiliated Rotary Anns. Each member had to be invited by a current member and job diversity was prized, so no two members could have the same work specialty.

“The idea is to sit around the table with people who are not in your profession,” said Akins, who noted that now two people in one job specialty are allowed. “It makes it more interesting than sitting around with people who do the same thing as you do every day.”

Traditionally, members were also required to attend every weekly meeting, and if they missed three successive meetings, they were dropped from the club, although the rules are no longer so stringent. For Wilson’s father, who maintained perfect attendance for about 40 years, this meant that he would visit Rotary clubs in other countries when on vacation with his family. Akins also has visited clubs while traveling in locales such as Bahrain, Shanghai and Cairo.

“Rotary is always fun from that standpoint,” Akins said. “If you’re traveling the world and want to go someplace where you feel at home, go to a Rotary meeting.”

The Palisades club’s meetings follow a specific pattern, with time for club business, a 30-minute speaker on an intriguing topic, and time to socialize and eat. Typically, the club has three one-hour breakfast meetings on Thursdays and one dinner meeting each month. Women, who the U.S. Supreme Court ruled were allowed to join the clubs in 1987, are now vibrant members, including current president Pamela Kratochvil, a lifelong Palisadian introduced to the club by past president Holly Davis.

Kratochvil, who operates L.A. Golf Academy, joined because “I thought it was a great opportunity to meld our business outreach to the community with philanthropy. I wanted to give back to my hometown and not only does it help my hometown, but it outreaches to the international community as well. It’s a wide spectrum that is impor- tant to me.”

For its work around the globe, Rotary has six areas of focus: promoting peace, fighting disease, saving mothers and children, supporting education, growing local economies, and providing clean water, sanitation and hygiene. Each year, Palisades Rotarians contribute by sending a member to participate in an endeavor, such as last year’s clean-water initiative in Merida in Yucatán, Mexico.

Worldwide, the Rotary Club has also been an essential part of the campaign to eradicate polio. The effort began in 1988 in partnership with UNICEF and the World Health Organization. The project has been widely successful, reducing cases from about 350,000 cases annually to 37 confirmed cases last year. Currently Afghanistan, Nigeria and Pakistan are the last three countries where polio is endemic, as opposed to 125 countries in 1988. To accomplish Rotary’s goal, each local club was assigned a portion of the fundraising required to tackle the disease, which led to the creation of the Art Affair fundraiser, which took place for 14 years along Temescal Canyon Road. Additionally, local Rotarian Ian Grant went to Ghana in 2000 to help administer the polio vaccine to children under six.

“We gave roughly a million polio vaccinations,” Grant said in a video the club made commemorating its 50th anniversary. “It was just a great project and very exciting.”

Palisades Rotarians were active in upgrading the playground at the Palisades Recreation Center and currently support children’s literacy by acquiring books for L.A. inner-city schoolchildren. In addition, the club regularly contributes to the Palisades-Malibu YMCA and the Boy Scouts, while also providing scholarships and awards to both PaliHi and Paul Revere students.

The club also supports the Fourth of July Parade each year and has taken responsibility for clearing and maintaining the pump-station grounds at Temescal and Sunset. For fundraising, the local Rotarians now hold Texas Hold’em poker tournaments, but while some endeavors depend mostly on fundraising, others require further commitments ranging from landscaping to political challenges.

For example, upgrading the park’s playground, Wilson said, “started with the actual concept and taking that concept to the City Council, showing up at the various hearings, and helping the city financially along with a lot of other organizations like the American Legion and Optimist Club. We went from the genesis of the idea to helping focus people’s wishes and desires on achieving that particular event.”

In addition, the club has fun internal events, including an annual demotion party, when the past president steps down and a new one takes over. One club member also is chosen annually as the Bob Wilson Rotarian of the Year, and $500 is donated to a charity of in that member’s name. (The club also honors a Palisades Business Person of the Year.)

“The motto for Rotary is ‘Service Above Self,’ and that’s what we like to do,” Kratochvil said. “We also have a yearly motto. ‘Rotary Making a Difference’ is this year’s. We like to make a difference locally as well as internationally.”