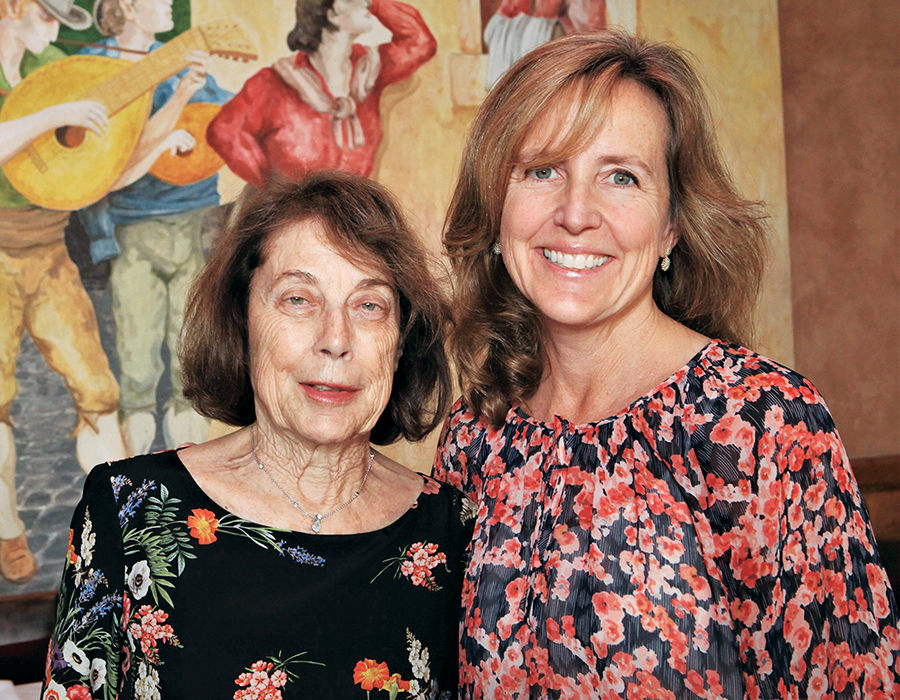 After 10 years as treasurer and 12 years as president, Alice Inglis has retired from her leadership role at the Friends of the Palisades Library nonprofit organization, which donates more than $75,000 annually to the branch library on Alma Real.

“It was a pleasure being president,” Inglis said at a Friends luncheon in her honor at Modo Mio in January. “I had a wonderful board, and I never had a complaint about anybody, though I guess some of them were late at times.”

In her quiet way, Alice was insistent about starting the quarterly board meetings at 7 p.m. sharp.

Laura Schneider, a former L.A. Times business executive who succeeded Inglis last October, said “Those who have known Alice longest will tell you that she is knowledgeable, fair, flexible and concise—all of which made her a respected and beloved president.”

Senior Librarian Mary Hopf, who has worked in the Palisades branch since 2010, spoke on behalf of her staff. “We just loved Alice, and it was wonderful working with her. She was our liaison with the community, and she made such a nice impact on people on behalf of the library. If things came up, if people had a question about something, she would handle it; she was honest and was great at making quick decisions.”

On behalf of the Friends, Wendy Edlen presented an orchid and a crystal gavel to Inglis, along with a note that said, “We are very grateful for people like you.”

In 1972, Inglis and her husband Bill moved to Pacific Palisades from Washington, D.C., where he had worked for the Peace Corps. “We came out with Katherine, age 7, and baby Billy, age 3 months,” Alice told the News after the luncheon. “I have always loved reading and consequently, libraries,” and this led to her eventual volunteer role with the Friends.

“My husband died in 2015, after 53 years of marriage,” Alice said, “so I am getting used to changes and new experiences, which I hope keep on coming. I am definitely open to new volunteer experiences.”

Her daughter Katherine now lives in Santa Monica with husband Tim; they have two daughters in college. She also has a gift store (Goods), on Ocean Park Boulevard. Billy, now a swim coach, lives with his wife Alyse and three children in Olympia, Washington.

After graduating from UC Berkeley, Schneider earned a master’s degree in jour- nalism at Northwestern and then went to work at Gannett.

“I ultimately moved to L.A. in order to work for the Los Angeles Times,” she said. “I ‘retired’ from my job as Marketing Director when my first son, Luke, was born in 2002.”

Schneider and her husband Tim, who owned a publishing company that merged with Northstar Travel Group in 2017 (he’s currently serving as founder and chairman of its Sports Division), met on a blind date in 2000 and married in 2001.

“We lived in Santa Monica until Luke was just over a year old,” Schneider said. “We wanted him to grow up in a small-town, friendly environment, and Pacific Palisades fit the bill perfectly. In 2004 we bought a house here but, much to my frustration, we couldn’t move in right away. I was anxious to become a Palisadian, so Luke and I would drive up from Santa Monica just to visit the library, listen to a ‘Grandma’ or ‘Grandpa’ read a story, do a few puzzles and leave with a big stack of books.”

The Schneiders lived just a half-block off the parade route in the Huntington, and when Luke was only 4, he began operating a lemonade stand on the Fourth of July, with all proceeds going to the library.

“In recent years,” Laura said, “Luke’s been joined by his younger brother, Jack (a fifth grader at Palisades Elementary), in his en- deavors. Last year, with a little help from mom and dad, the boys were able to donate $250 to the library.”

Schneider joined the Friends board in 2009, and when she led her first meeting last October, she said: “The library is a special place. This [serving as president] is a way to give back that is meaningful to the community. I can’t fill Alice’s shoes, but I will do my best.”

The Friends organization raises money throughout the year with parking-lot book sales, the library bookstore, and membership donations. The proceeds are used to buy new books and audiovisual materials for the library, pay for office equipment and furnishings, support landscaping and building maintenance, and underwrite various library programs for all age groups. The Friends also provide assistance to inner-city libraries.