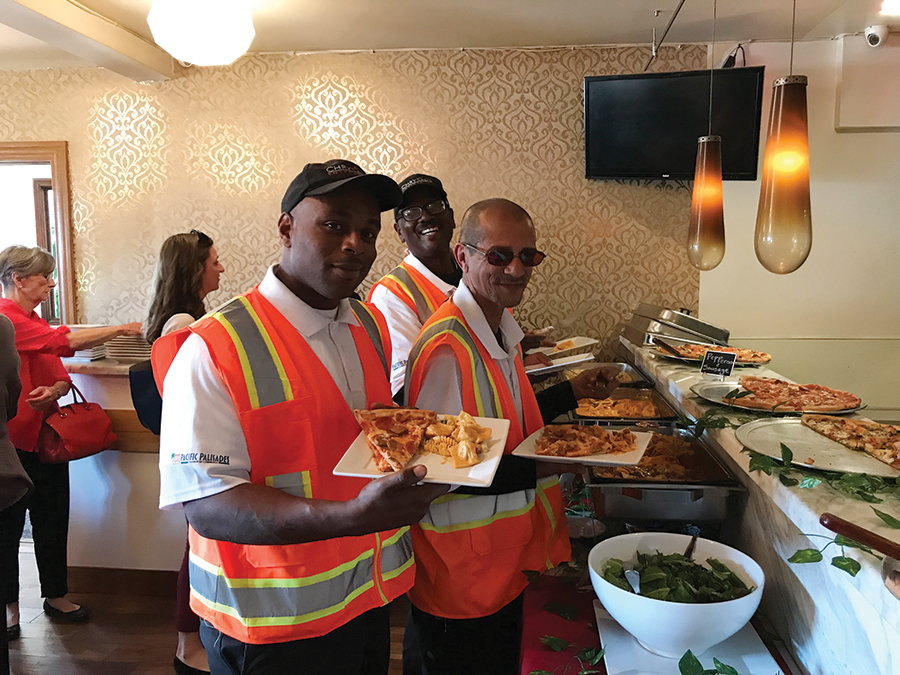 The Pacific Palisades Business Improvement District (BID) board held its monthly meeting on Dec. 6 at Community United Methodist Church and focused on fiscal projections for 2018.

The total estimated revenue and expenditures for the coming year will be almost $180,000. Thanks to a 2 percent assessment hike voted by the board, businesses will supply $143,381 and there is a $35,676 surplus carry over from 2017.

The “Clean and Beautiful” budget is $108,800 (in 2016 it was $92,000 and in 2017 $123,128). The sidewalks in the business district were power-washed twice this past year and trees were trimmed. The 2018 plans include installing lights in trees because according to the BID annual report, “a well-lit and well landscaped district supports an increase in commerce and provides a special benefit to each individually assessed parcel in the district.”

The BID board, which has a zero tolerance for graffiti, pays to remove all graffiti in the business district.

Money also goes to Chrysalis, which supplies two workers twice a week to clean sidewalks and gutters and empty trash.

The chamber has been raising about $30,000 a year in donations (mostly from residents plus a $7,500 contribution from realtor Michael Edlen) to hire one Chrysalis worker, but would like BID to take over that responsibility. Currently there is not enough in the budget to do that.

“Communication/Marketing” is budgeted at $16,158 (in 2016 it was $20,000 and in 2017 it was $9,895). The money is used for a quarterly newsletter, maintaining the BID website, for social media, local news coverage, hosting community events (such as the recent holiday luncheon that honored first responders) and BID branding projects. Under “Management/Slow Pay/City Fees” $54,100 is budgeted (up from 2016’s $30,000, but down from 2017’s $64,585). This includes Director Laurie Sale’s salary, legal costs, accounting costs and city fees. There have been unsuccessful attempts to collect the full assessment amount from LAUSD. Palisades Elementary School occupies a large portion of the BID and in 2017 was assessed at $13,916, but only paid $5,516. The BID boundaries include all the business property along Sunset from Carey to Temescal Canyon, and the business properties north and south of Sunset, plus the Village Green, the Los Angeles Department of Water and Power building and Palisades Elementary School.

Fifty-five property owners pay assessments, which are different from traditional taxes because the money may only be used for projects that specifically benefit the properties in the BID, and cannot be diverted into the city’s general fund.

Sale spoke at City Hall against street vending, and the BID has asked for an opt-out policy. “There were other people there who also wanted an opt-in, opt-out option,” she said. There was a general feeling that street vending is unfair to those who pay taxes on buildings and their businesses.

At the latest BID meeting, somebody asked, “If there is a vendor in front of your business and then someone slips or falls, who is responsible?” Nobody knew the answer.

Additionally, reflecting a problem across the city, local businesses are having issues with the garbage-hauling monopolies contracted by the city. Sale was asked to send a letter to Councilman Mike Bonin’s office and the city, asking them to request that garbage companies have a cap put on what they can charge, and to guarantee a fair percentage for raises in hauling rates.

New board members are sought. Prospective candidates can e-mail Sale at laurie@palisadesbid.org.

The next meeting will be held at 8:30 a.m. on Feb. 7 at the United Methodist Church, 801 Via de la Paz. For more information, visit palisadesbid.org.