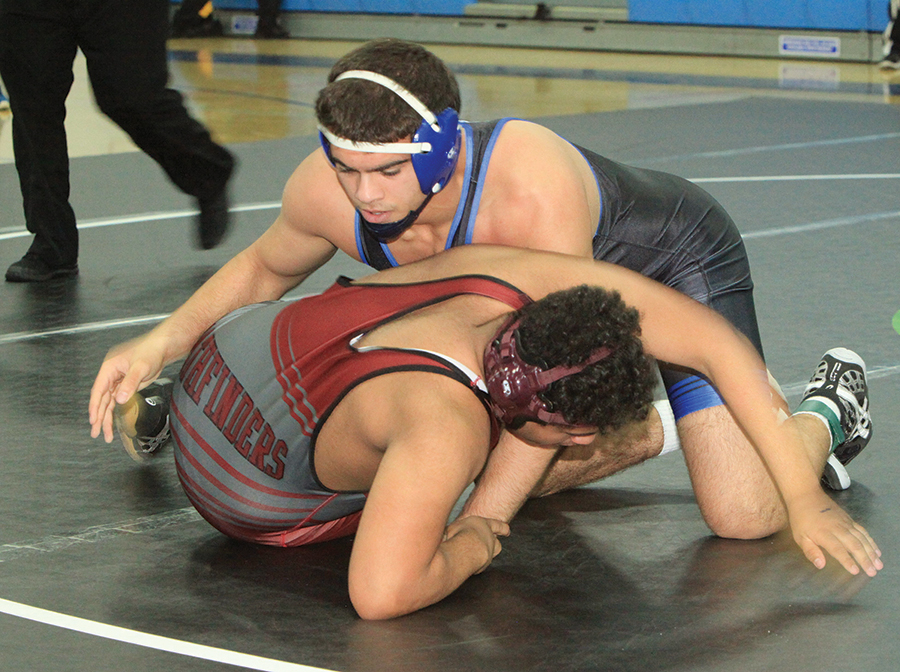 Although Palisades High School started its wrestling program in 2011— without mats and no practice space—in December, five Dolphin wrestlers were invited to the Doc Buchanan Invitational held at Clovis High near Fresno on January 5 and 6.

This might be one of the toughest invitational tournaments in the nation. The opening brackets have 64 wrestlers at each weight class, and all have to earn the right to be at this tournament.

The Doc B tournament had 21 teams from out of state, including those from New Jersey, Utah, Nevada, Illinois, Missouri, Colorado, Oregon and Washington.

Additionally, 26 California schools that are ranked in the top 50 in the state, including the top five Buchanan, Gilroy, Selma, Oakdale and St. John Bosco, competed.

PaliHi Coach Aldo Juliano said they received an invitation from the Clovis coach after the good showing the team had at the 36th Annual Newbury Park Invitational, which featured 252 wrestlers from California and Nevada.

At Doc B, Galef a junior, wrestled at the 138-weight class. His first opponent was Sonny Santiago (St. John Bosco). Galef lost 5-3, but Santiago went onto the championship match where he took second. “I knew it was going to be a tough tournament, and I’d have to wrestle someone like him,” Galef said.

Al-Saudi, at 195, made it to the quarterfinals, before losing to the second seeded Antonio Andre of Gilroy.

The Dolphins held their first league match on January 10 at home against West Adams, Fremont, Brightstar and Dorsey. They won 84 to 24. Coach Juliano said “We’re heads and tails above the rest of the league, I kind of expected this result.”

He took some of his top wrestlers to the Battle for the Belt in Temecula this last weekend, but only Al-Saudi placed. He took fourth after losing to Nick Villarreal from Gilroy in a 7-5 decision.

Juliano said that they will be tested in regionals on February 10, when they go up against Valley powerhouses Birmingham and San Fernando.