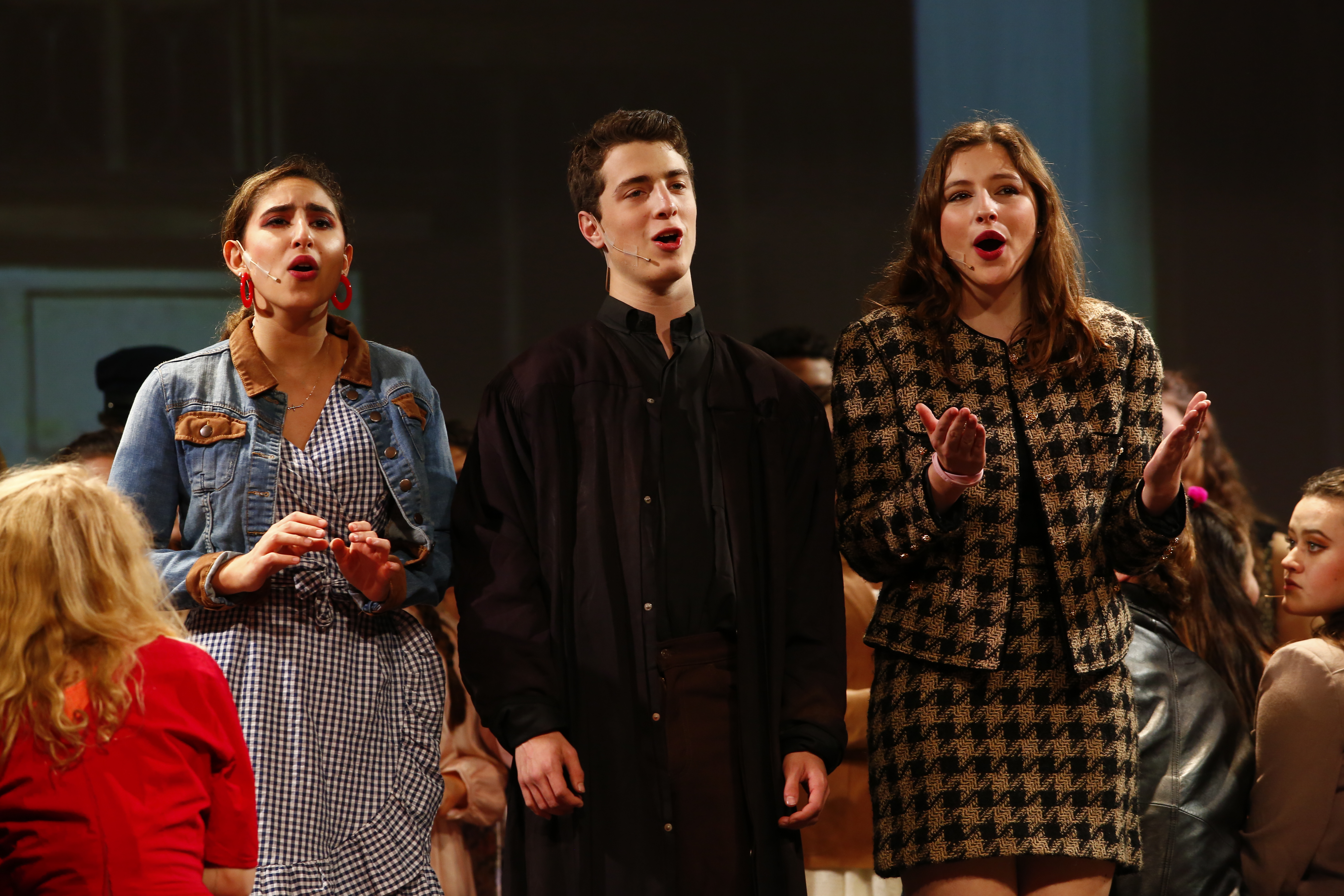 Fifty-six cast members, plus the skills of 38 people in the technical crew, nine band members and two directors add up to one fabulous and fun show at Palisades High School.

“Footloose” opened on April 5 in Mercer Hall, and if you haven’t been to a musical in a while, take advantage of this opportunity—adult tickets are $16, the parking is free, and the talent is amazing.

The story revolves around a teen, Ren (Jagger Hunt), and his mother Ethel (Madison Delius), who move for economic reasons from Chicago to the small town of Bomont, when the dad/father leaves them. Ren has always danced to relieve tension and have fun, but when he arrives in Bomont, he finds out dancing is forbidden.

Under the influence of Reverend Shaw Moore (Ethan Jones), that law was passed after his son and three others were killed in a car accident as they were going to a dance.

The musical is about finding joy, and also dealing with problems that one has no control over, such as a dad leaving or a son dying in a freak accident.

Individual and ensemble performances are good, but some are exceptional, and it’s easy to see why PaliHi continues to supply talent to Hollywood and Broadway.

The preacher’s daughter, Ariel (Roberta Alaman), who is a vocal semifinalist in the prestigious Spotlight awards competition and was named a 2018 YoungArts merit winner, is excellent as she gradually understands her own self-destructive behavior.

She is surrounded by three gal pals, Rusty (Taylor Schonbuch), Wendy Jo (Ivy Schofman) and Urleen (Gabriella Palazzo), who have amazing voices. Although senior Palazzo has never been in a show before, with a voice like hers, this shouldn’t be her last. The three sang “Somebody’s Eyes” and it was absolutely haunting.

One of this reviewer’s favorite vocalists is Enzo Alexander, who has a voice that one doesn’t forget. His solo to start the second act was just lovely. Playing a second character, Jeter, he teams up with Willard (Jamie Mazur), Bickle (Jack Essner), Gavin (Charlie Hobert) and Ren for a lighthearted and amusing “Mama Says.” The guys nearly steal the show with this number.

If you want your breath taken away, watch and listen as Sarah Silvers, who plays the Reverend’s wife Vi, sings. Her stage presence is natural and something that can’t be taught. This talented senior will attend the Berklee College of Music this fall.

And if you’re a PaliHi football fan, come watch star running back Dakota Hamilton, who makes his debut on the stage as part of the ensemble—not only can he move on the field, he can move on stage.

A huge acknowledgement goes to the directors and choreographers, sisters Cheri and Monique Smith, for taking this huge group of kids, some of whom had never been on stage before, and turning this into an amazing show.

All your local news, events and happenings in under 5 minutes.  Michelle Pfeiffer sells Palisades home.New comedy night at Hanks...