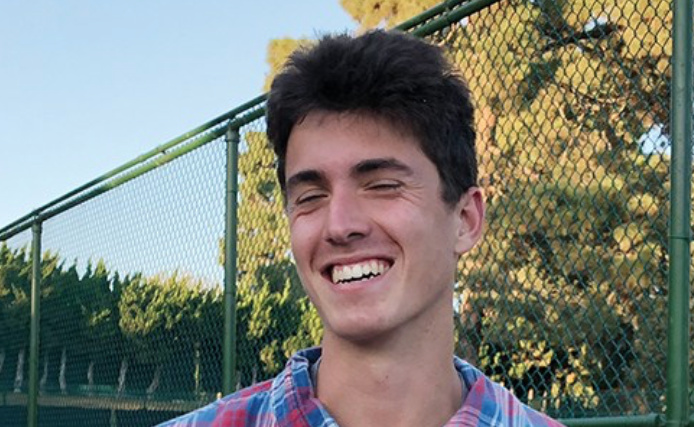 Danilo Milic started playing tennis because his dad’s friend had won 10 free tennis lessons. His dad’s friend didn’t want the lessons, so they were given to 6-year-old Milic.

The court was at a private home. “It was cement and I had never seen a court like that,” the Palisades High School junior said.

Living in Brentwood, he played basketball and was also on a swim team, but by the time he was 8, tennis was his sole focus. “I always wanted to impress my dad, so I didn’t say no,” Milic said.

As a sophomore, “I realized I was burned out,” he said. “It wasn’t fun anymore and I didn’t have a passion for it, so I took time off.”

This year Milic started treating the sport as “a fun hobby. When I did that, it became fun again.” And he’s winning. Against Westlake on April 9, he played in the No. 1 singles spot and beat his opponent 6-2, 6-2. Then against Loyola two days later, he played No. 2 singles, winning 6-1, 6-3.

Milic has also started swimming again for fun “after many years,” and butterfly is his favorite stroke.

His parents are Goren and Natalia and he has two step-siblings, a 10-year-old sister and a 2-year-old brother.

His favorite subject in school this year has been math, and he praises his math teacher, Larry Wiener, who he said makes the subject interesting.