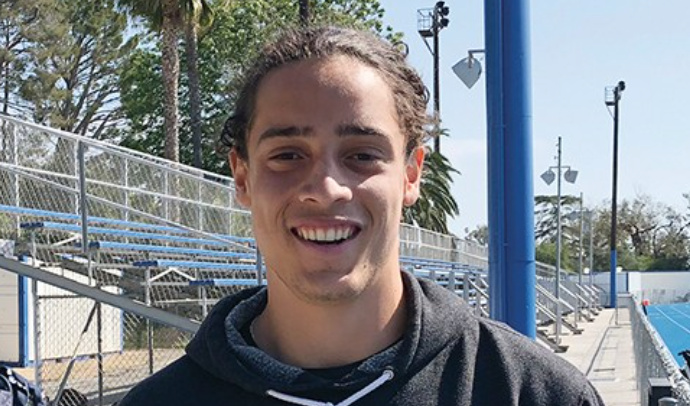 Baily Jones, a 6’1” senior at Palisades High School, qualified for the New Balance High School indoor championships in New York City March 9-11. Out of 40 triple jump competitors, he tied for 23rd with a jump of 45’5”.

“The experience was amazing, compet- ing with the top people in the nation,” said Jones, whose best jump this year is 47’10.5” at Arcadia on April 7.

Growing up, Jones played football, soccer and basketball. “I thought I was going to be a basketball player,” he said.

But that spring he went out for track and met Pali’s “Jump Coach” Darryl Taylor. “I tried triple jump and fell in love with it.”

Jones made the varsity basketball team as a sophomore, but shifted his focus to track and field, where he has become one of Pali’s top jumpers and hurdlers.

His favorite event is the triple jump because “it’s definitely technical. You need to know that aspect in order to succeed,” one said.

This year, his best long jump has been 21’11” at the Covina Invitational on March 31 and his fastest time in the 110-meter hurdles is 15.28, achieved at the Culver City Invitationals on March 3.

Jones has already been admitted to four colleges based on his academics (Texas A&M, Georgia, Maryland and LSU) and hopes to major in kinesiology, while participating in track. All are Division 1 schools and he would need 49’ in the triple jump and 24’ in the long jump to compete.

His goal this spring is 50’ and 24’ in these events and he believes it’s attainable. He trains every day and works with weights in the off-season.

“Every so often, we’re in the PaliHi pool, working out with drills and running,” Jones said.

The son of Norman and Heather Jones, he has a younger brother, Andre, a sixth grader at Paul Revere.