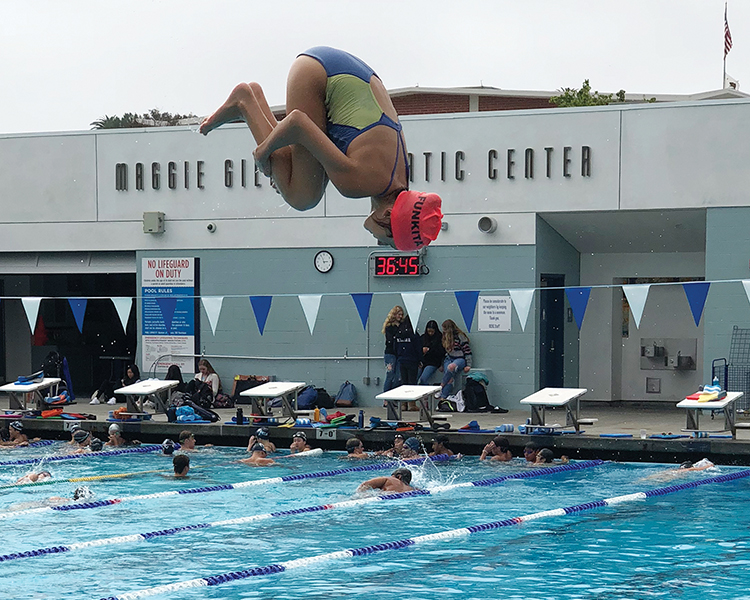 Last May, the News reported that the Palisades High School swim teams were so fast that “it wasn’t a question of winning at city finals, but rather how many city records the swimmers would break (five) and how many would qualify for the state meet in Clovis (20).”

This year Coach Maggie Nance has 110 swimmers/divers and isn’t sure how many records will fall, but she feels that both teams have the depth and talent to easily repeat as City Section champs.

“We just graduated some powerful boys, the [Greg, Jon and Alex] Havertons, Kian [Brouwer] and Hunter [Loncar],” Nance said. “But, it opens up the lineup for the next tier of kids.”

This year’s team captains are Sautter, Chang and Torgerson.

Nance said she also has younger swimmers, many of them sophomores, who will be contesting individual spots with excellent times. They include Andrew Planting, Chris Pederson and Daniel Yin.

In addition, “Theo [Trask] is a great kid and a great addition to the team,” the coach said. Trask, a junior, was a star on this year’s water polo team.

Nance praised her girls team for their cooperation and the way they support one another.

“We have seniors Meredith Haaker, Neve Rose, Elena Saab and Maxine Graves,” Nance said. “All are really fast and none are swimming club.”

Sophomores Darby Green and Sophia Wlodek, who swam varsity as freshmen and helped set a city medley team record (1:47.44), return this year, along with another member of that team, senior Dora Seggelke.

Serving as co-captain with Rose, Seggelke has committed to UC Santa Barbara for swimming.

There are 12 divers this year, eight girls and four boys, who work under coach Tom Davidson, now in his sixth year at PaliHi. “We have some good returners,” he said, “and some new faces that will be helpful this fall.”

Alexis Kleshik, who won the city one-meter girls diving title as a sophomore, is back this year. Among the boys, sophomore Andrei Kozeluh and junior Asa Tatro, who were third and fourth respectively, also return.

There are four other teams in the Western League (University, LACES, Venice and Hamilton), but Pali should handily win the championship. To challenge her swimmers, Nance seeks outside meets and competitions, such as 37th Annual Los Amigos High School Coed Swim Relays on March 3.

“There were seven relays and each team had eight swimmers—four boys and four girls,” Nance said. “It was crazy, but fun.”

One meet took place at the South Bay Invitational (formerly the Beverly Hills meet) on March 20 and March 21, and the inaugural Mt. Sac Invitational is on April 13-14. “It’s a really fast meet,” Nance said.