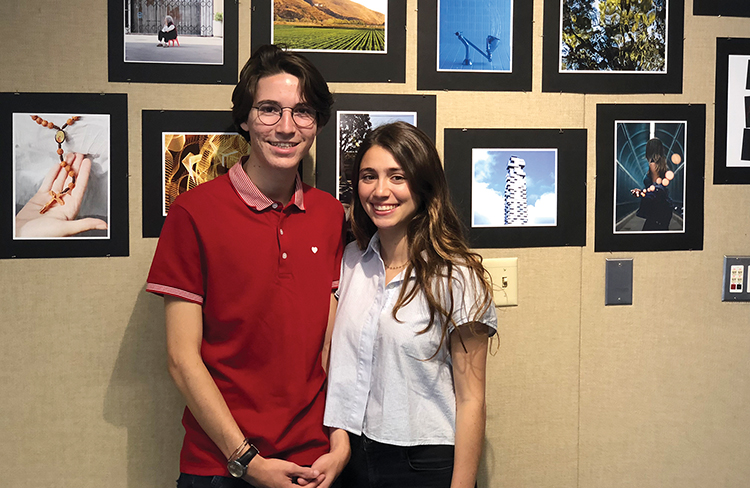 This is beyond high-school work,” said Los Angeles Public Library public relations specialist Romondo Locke as he viewed the photographs on display in the Palisades Library community room. “This art could be displayed at any gallery downtown and people would not say it’s from high school students; instead they would be asking about the artists.”

Photographs by students in Rick Steil’s beginning, advanced and AP photography classes at Palisades High School were on display in May at the library, and Locke had been sent to videotape the exhibit and share it with other public libraries.

The Friends of the Palisades Library paid for refreshments at a May 25 reception, where the PaliHi jazz band provided music and student photographers were available to discuss techniques they had used.

The exhibit was curated by photography students and seniors Julian Budge and Amanda Saltz, who selected the photos, mounted them and decided the layout of the display.

“There is so much work that goes into an exhibit,” said Budge, who will attend Parsons at the New School in New York City this fall.

“There is a feng shui of what goes together,” said Saltz, who plans to attend UC Berkeley, majoring in art and photography. “The color schemes—and making it fun for people to see.” Budge agreed, “It [arranging the photos] is an art form within itself.”

Saltz added, “I like doing unconventional organic shapes [of photos] that flow together, not in one line or a pattern.”

Asked how much Steil helped them, both said that their teacher had told them, “It’s totally your show.”

Saltz, who attended Corpus Christi, needed an elective as a freshman and was placed in advanced photography, which then led to AP Photography and AP Art. Her father is orthodontist Gary Saltz and her mother, Edie, is a hairstylist.

Budge, whose father Jamie is known for his surfing films about the inception of the sport, said he’s been shooting photos of people skateboarding since he was in elementary school. His mother, Patti, is a bookkeeper.

Budge received his first camera when he was about 11 and has already been paid for his work. “I’ve done a commercial shoot, and I’ve shot photos of houses for real estate agents,” he said.

Many of the photos displayed were fashion shots. Steil, a former professional fashion photographer, arranged for clothing designer Venia and a hair and makeup company to come to the school to prep student photographers and models for their photo shoots.

Several interesting fashion shots were on exhibit from Sierra Margolis, who started taking photos in seventh grade at Revere with a little point-and-shoot camera. She will attend Berkeley with plans to major in environmental studies and minor in photography.

“This is my second year in an actual photo class,” Margolis said. “I like science a lot. When I went to

Yosemite, I saw how beautiful it was.” She realized that if she combined photography and the environment and showed people a visual, “It gets them interested.”

Margolis’s photo of the girl in the orange dress was inspired when she was on a science trip to Leo Carrillo Beach to look at tide pools. “I could see a picture I wanted to take here,” she said, noting that she purchased the dress at a thrift shop and since her AP Photography concentration was on asymmetry, she tied it into body image. “Although it’s fashion, it’s now more surreal.”

Once she takes a photo (preferably on location), the post-production “takes a long time,” Margolis said, because she digitally manipulates the colors, to work the contrasts— the blues against the dress color. Her mom, Yvonne Zagla, is a nurse and her dad, Harlan Margolis, is a musician.

“The girl’s face just says everything,” said a visitor viewing the photo of the girl in the bathtub taken by junior Emerson Hurd, the daughter of Jill and Evan. “I enjoy taking photos of my friends who can tell stories through their expressions and body language,” said Hurd, who plans to take AP Photography next year. Trevor Scholl, who will attend the Tisch School of the Arts at New York University, said “This was my first photo class.”

He also has never taken an art class, but worked in film for Pali Production, the on-campus group. His exhibit piece was about his grandfather’s death and his trip to the Midwest for the funeral. In the center is a Polaroid of his cousin’s dog.

Scholl uses overlays and Photoshop to get the desired effects. He attended Revere and is the son of Jennifer, an architect, and Oliver, a production designer. His work was featured at ARTRIBE, the annual student-run gallery event showcasing the visual art and musical talents of PaliHi students. The May 26 show benefitted the SPIRAL Foundation.

For Liam Mathers, who plans to major in environmental engineering, either at UC San Diego or the University of Michigan, this was his first photo class. He became interested after working on yearbook with Steil for the past two years. “He has all these film cameras,” said Mathers, who explained why technically it’s more challenging than using a digital camera. “You have to control the aperture, the shutter speed, the lighting—and you have just one chance. It’s more rewarding.”

Mathers also enjoys the developing process. “There’s a lot of manipulation you can do in the darkroom,” he said. In the tree photo, he put his hand under the photo to block the light on half of the photo; the other half it is the same photo reversed. His parents are Eva Sobesky and Todd Mathers.

At the PaliHi Booster Club auction, prints of the exhibit photos were sold; one of the most requested images was Kai Padden’s Santa Monica. Her parents are John and Lori Padden and she plans to attend Santa Barbara Community College in the fall.

“I got into photography during middle school,” Padden said. “My favorite thing to shoot is my friends surfing.” Senior Felix Massey, the son of Dawn and Ed, became interested in photography when he was 8. He attended elementary school at PS 199 in New York City before the family moved to the Palisades. He attended Westside Neighborhood School in Playa Vista for middle school.

“I enjoy shooting a variety of different subjects including landscapes, architecture and still life, but the subject matter that appeals to me most is the human figure,” Massey said. “More specifically, active people in dynamic motion. The grace, elegance, agility, speed, strength and balance of an athlete in motion can be mesmerizing.”

Massey was able to catch PaliHi triple jumper Bailey Jones in air. “I enjoy capturing the action and pausing the fluidity in a static state; it’s inertia in motion,” he said. “Accomplishing the challenge of shooting a human figure has been my most rewarding experience in photography.”

The last word goes to L.A. Library’s Locke, who noted, “These students are so prepared for the next level. Rick prepares them for life and to be successful.”

If you saw an image you would like to buy ($25), contact Steil at rsteil@palihigh.org. All proceeds are used to support the photography program at the high school.