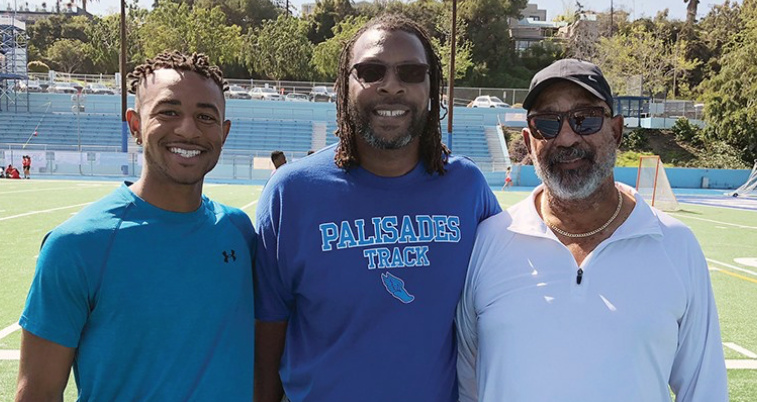 Claudius Shropshire has taken over as head coach of the varsity track and field team at Palisades High School this season and hopes to bring continuity to the program.

“I started coaching in 1976 at Jordan High School,” Shropshire told the News. One of his first athletes was Florence Griffith Joyner, who graduated in 1978, won three Olympic gold medals and still holds world records in the 100- and 200-meter dashes (10.49 seconds and 21.34 seconds). “I worked with her afterwards on technique.”

Shropshire ran track at Dorsey High School and initially attended Washington State (where he ran a 9.4 in the 100-yard dash), before returning to West L.A. College, where he learned how to triple jump. He then went to UC Irvine and competed in that event plus the hurdles and was part of the 1975 NCAA championship team.

“I’ve coached everything from the 50 to a marathon,” said Shropshire, who has a bachelor’s degree in community health and a master’s degree in counseling from Loyola Marymount University.

After serving as head men’s track coach at Santa Monica College from 1985 to 1994, he coached at West L.A. College until 2003. He then became an assistant principal at University High School until 2013.

Shropshire coached his son, also Claudius, who is helping him coach PaliHi runners. Claudius Jr. is a Team USA Duathlete and a working actor.

“I have a young team this year,” consisting mostly of freshmen and sophomores, Shropshire said. “I have to see how I can mesh everyone together.”

One of his challenges has been to get the program “back on track,” so to speak. Last year, the head coach quit just before the season started and two assistant coaches stepped in at the last minute.

Another issue for the athletes, Shropshire said, has been “learning how to deal with me, and the workouts. People were used to easier workouts.”

After Shropshire started putting sprinters through his rigorous routine, some of them quit, but “there were enough who were in- terested in working and they stayed.”

“I believe in teaching,” said Shropshire, but that also means conditioning.

Another challenge at PaliHi is the crowded track and field facility. The all-weather running track is first-rate, but as Shropshire noted, “There are so many activities going on at the same time.” In the spring, track has to negotiate with girls softball and two lacrosse teams for use of the track/field.

“Jumping” coach Darryl Taylor, who still holds the school record in the triple jump (48’5”) and long jump (23’8”), has a senior who is looking to break both records. Bailey Jones was able to travel to the New Balance High School indoor championships in New York City in March (see adjoining story), but in general, the track and field program needs financial assistance to help other elite athletes attend meets.

“We need to raise money to send athletes to events, to register them in track meets, for pay for officials and for uniforms,” Taylor said. The coaches are working with a social donation platform Snap-raise.com, which asks those interested to contribute directly.

The concept is that no one has to buy products they don’t really want, such as candy or magazines.

These runners should help the Dolphins fare well in the City Section championships on May 24 at El Camino College.

Palisades athletes competed at University High School on April 19 and at the prestigious Mt. Sac Relays April 20 and 21. Their next home meet is April 26, followed by the Western League prelims on May 4.