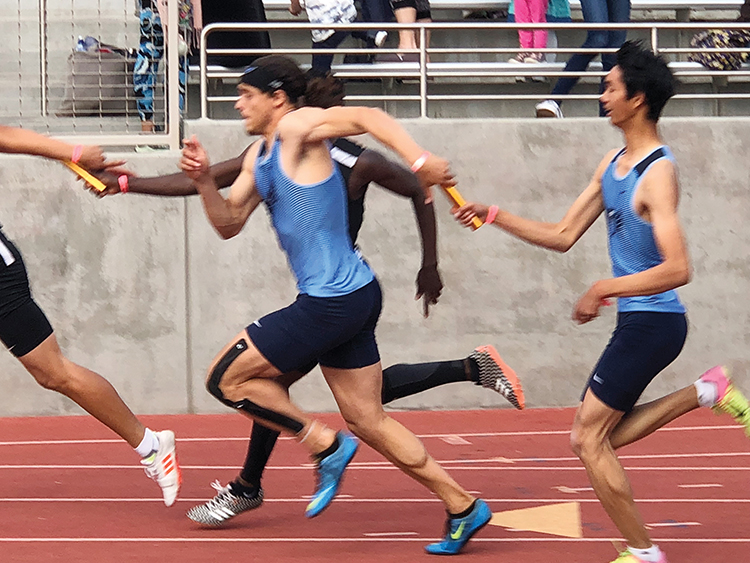 Despite cool weather and windy conditions, it was a good day for the Palisades High School track and field teams as they competed in the L.A. City Section championships on May 24 at El Camino College.

The top-three varsity finishers (plus those who made the qualifying time/jump standards) advanced to the state meet in Clovis on June 1 and 2.

The day’s overall hero for Pali was senior Bailey Jones, who jumped 46’1” to win the triple jump, placed third in the 110-meter high hurdles and helped the 4×100 relay team finish third. He was seeded first in the long jump, but had problems hitting the board and ended up fourth with a leap of 21’7”.

The distance and middle-distance runners, under coach Bob Macias, have always performed well at the City Finals, and this year was no different.

Junior Brittany Darrow captured her second city title in the 800 meters (2:19.90) and junior Elizabeth Rene, the defending 1600-meter city champion, took third (5:11.74) in her event to earn a berth at state.

PaliHi has a great “jumping” coach in Darryl Taylor, a PaliHi alum who holds the school triple jump record at 48’5” and the long jump record at 23’8”. Bailey Jones has thrived under his coaching, along with fellow senior Camron Bailey, who finished third at city with a triple jump of 44’5”.

Freshman Chandler Smith was sixth in the girls long jump ( (16’9”).

In the girls pole vault (contested a day earlier), sophomore Erica Bagby finished second by clearing her third and final attempt at 11’0”. Taft’s Ashley Peykar cleared the same height, but with one fewer miss.

This was the first year for PaliHi’s new head track coach Claudius Shropshire, who began coaching in 1976 at Jordan High. He was assisted by his son Claudius, a Team USA Duathlete.

At the beginning of the season, Shropshire told the News, “I have a young team this year and I have to see how I can mesh everyone together.”

Girls: Sophomore Cassandra Hernandez was third in the 800, ninth in the 1600 and sixth in the 3200. Freshman Gabriella Ligun was second in the triple jump, seventh in the 100-meter hurdles and eighth in the long jump.

Sophomore Jane Nwaba, a varsity basketball star, went out for track for the first time this year. Although she didn’t start high jumping until mid-season, she cleared 4’10 to win the frosh/soph title at city (and just missed at 5’0”). Her winning jump would have been good enough to place fifth in the varsity finals. Nwaba also won the triple jump (32’9”). She was an alternate for the long jump, and when a competitor didn’t show, she took the slot and ended up in third place (14’11”).

For the first time in recent history, PaliHi also had a girl shot putter in sophomore Caylyn White, who took third (30’5”).