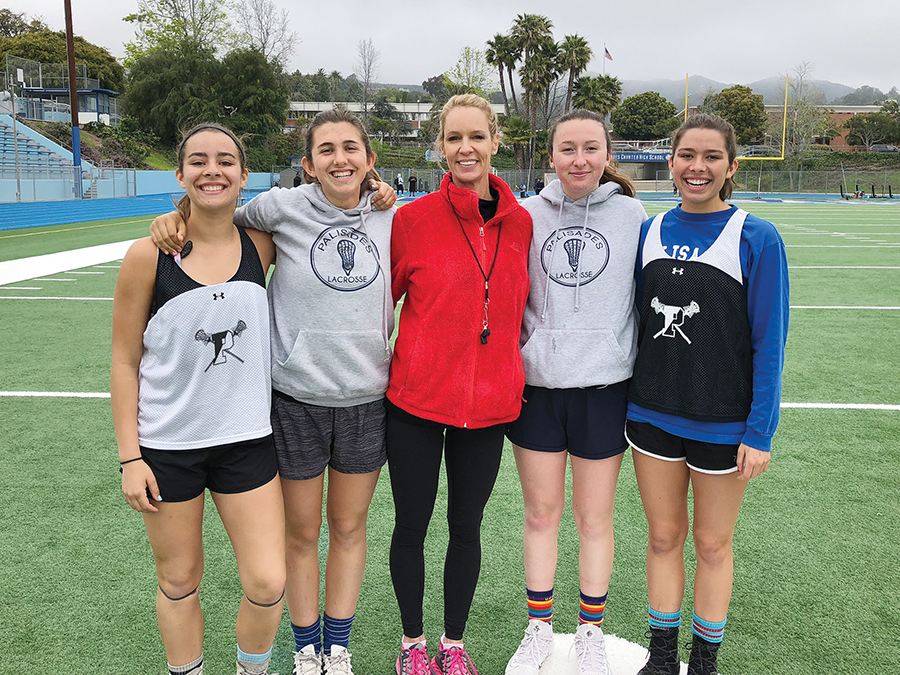 Runner-up a year ago to Birmingham, the Palisades High School girls lacrosse team is favored to bring home the City Section title this year after defeating their nemesis 13-9 on April 11.

Coached by Betsy Economou, who was Maryland’s Female High School Athlete of the Year in 1990, the Dolphins lost to Birmingham in last year’s championship game, 6-5, but overall finished the season with a 14-4 record.

Lily Wolman, one of last year’s top scorers, is PaliHi’s sole senior. Last year’s goalie Jackie Au, who won the team’s MVP award, has been replaced by Jessie Taft, a quick study at her position. The junior is a water polo player who had never picked up a lacrosse stick until she came out for the sport this year.

In Pali’s second game of the season, against Chaminade, the Dolphins lost 12- 10, but Taft did not allow a single goal in the second half.“ She had only touched a lacrosse stick maybe 10 times before she went in goal,” Economou said.“And Wolman wasn’t there.”

The Chaminade coach, who also has a girls club team, Scream, usually presents a problem to Pali, but Economou thinks the Dolphins could have defeated Chaminade if the circumstances had been different.

Five of her starters were on the water polo team, which played in the inaugural State water polo tournament in early March and were unable to practice with the lacrosse team until the season was underway.

Additionally, the spring sports at Palisades High School (except baseball) must fight for field space at the sports stadium, which is shared by softball, track, boys and girls lacrosse—and since girls soccer advanced to the regional playoffs, the field wasn’t available to other sports.

“It’s hard to properly prepare a team [without a field],” said Economou, who was recruited by Division I schools in three sports—soccer, lacrosse and basketball— before choosing Loyola at Maryland.

With so many younger players, one of Economou’s biggest challenges is “not having a senior class [for leadership]. Fifteen of the girls have never played before.”

Economou and assistant coach Katlyn Duffey are trying to focus on tiny adjustments that can make a difference to players. “A small detail such as adjusting a girl’s grip or showing them how to keep the hands away from the body, translates into better play,” Economou said.

Pali traveled to El Camino on Tuesday and will play a rematch with Birmingham on April 20 at Birmingham. Their last home game will be against Santa Monica on April 23 at 5 p.m.

The city semifinals are April 25, with the championship game on April 28.